Americans are more likely than not to say torture is sometimes justified, but are less likely to support some of the specific tactics used against detainees by the CIA, a new HuffPost/YouGov poll finds.

The survey comes in the wake of a 500-page Senate Intelligence Committee report on the CIA's post-9/11 torture program, released this Tuesday, which found harsh interrogation tactics were widespread and rarely effective.

The report concluded that, contrary to the CIA's claims -- and the belief of 48 percent of Americans -- the use of torture almost certainly didn't help locate Osama bin Laden.

Most Americans say they've heard about the report, and a majority of Americans agree with Republicans who have said the details in the report will hurt the country's image abroad, and say that making the report public does more harm to American interests than the actual use of torture does.

That doesn't mean, however, that there's much support for the CIA either. Just 10 percent of Americans think the agency has been mostly truthful about its use of torture against suspected terrorists. Only 21 percent think that the torture program was legal, with another 24 percent saying it was illegal but necessary, and 32 percent that it was both illegal and unnecessary. About a quarter say the CIA officers who tortured detainees should face prosecution.

Ultimately, only 39 percent trust the CIA, Congress or both to do what's right for the country, while 62 percent don't trust either the CIA or Congress, or aren't sure.

Americans are split on whether torture is justifiable

A 47 percent plurality of Americans say it's possible to fight terrorism without the use of torture, while 30 percent say it's impossible and 23 percent aren't sure.

But 48 percent of Americans say the use of torture against suspected terrorists is always or sometimes justified, greater than the 42 percent that say that it's rarely or never justified. Other polling has found similar results, with Americans' willingness to accept the use of torture rising over the past seven years.

While 31 percent say information gained from the use of torture against suspected terrorists is mostly reliable, 32 percent say it's mostly unreliable, and 37 percent are unsure.

Republicans are about twice as likely as Democrats to say torture is sometimes or always justified, and four times as likely to say information gained from it is mostly reliable.

Disapproval for some of the harshest methods used

Asked specifically about some of the details mentioned in the report, Americans were less supportive. 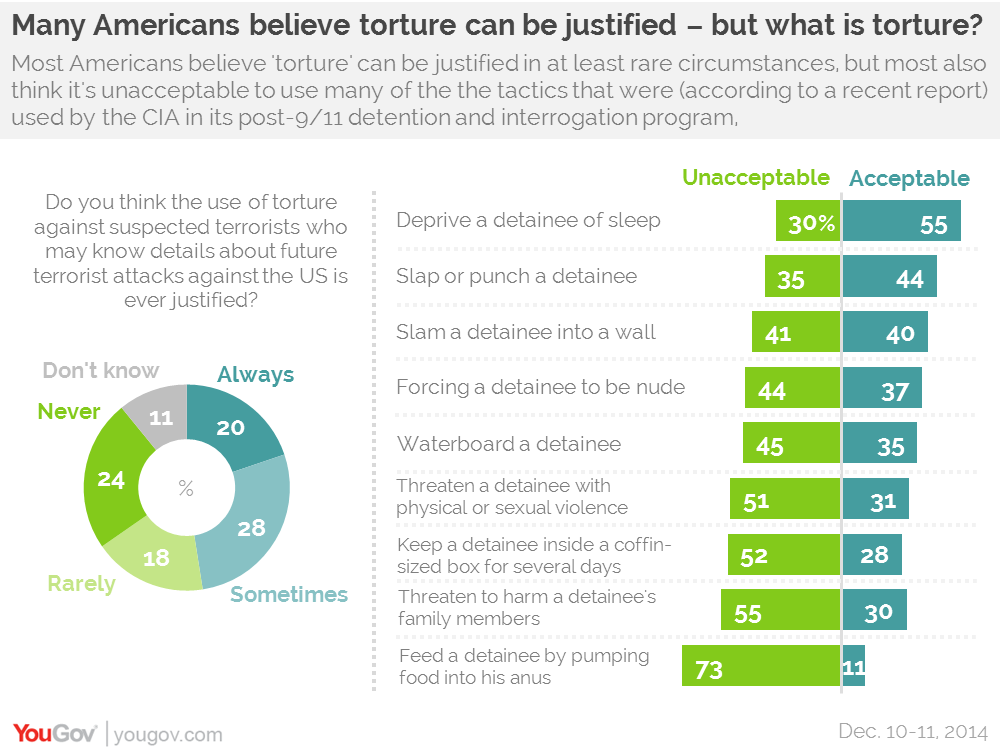 Just two of the nine tactics mentioned in the poll, sleep deprivation and slapping or punching a detainee, were considered more acceptable than unacceptable. Americans were more likely to say it's unacceptable than acceptable to waterboard detainees or to force them to be nude.

A majority agreed it's unacceptable to threaten detainees with physical or sexual violence, to keep them inside a coffin-sized box for several days, or to threaten to hurt their family members. By far the widest condemnation, however, was reserved for the use of "rectal hydration," or pumping food into a detainee's anus -- a practice 73 percent of Americans said was unacceptable. 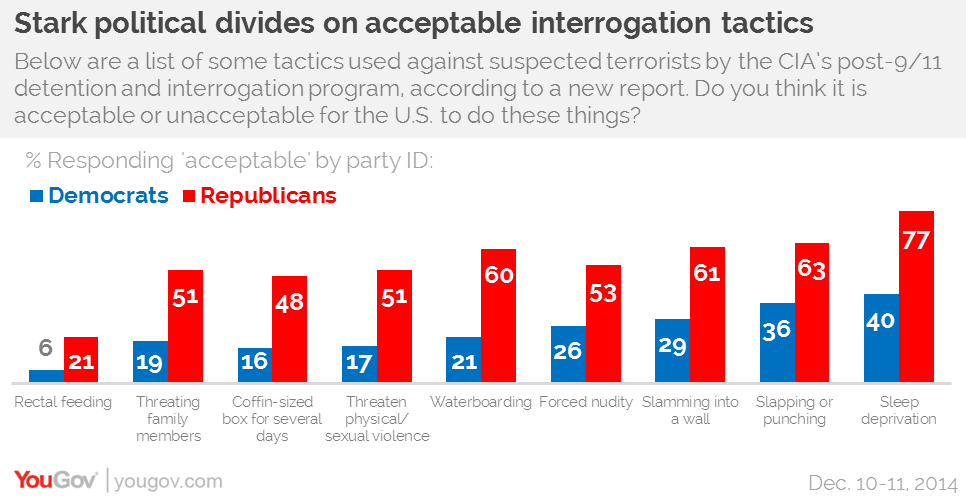 Partisans had very different views on the acceptability of most tactics, with the biggest gulf appearing on waterboarding, which Republicans were 39 points more likely than Democrats to defend. Forty percent or fewer of Democrats considered any of the methods asked about acceptable; 48 percent or more of Republicans supported the use of everything except rectal hydration, which just 21 percent found acceptable.

Americans Are Divided On Use Of Torture, But Fewer Support Some Of The Harshest Tactics
Politicians React To CIA Torture Report