Scroll down for video.

In the 1970s, some at NASA believed humans would be colonizing space by now. They conducted a summer study in 1975 that explored the possibility of building self-sufficient cities that orbited Earth.

Scientists, engineers and artists with NASA's Ames Research Center and Stanford University, focused on a particular space colony prototype, based on the work of Princeton physicist Gerard O'Neill. Called the "Torus" design, this colony looked like a giant wheel, one mile in diameter and large enough to house 10,000 people. (See video below.)

Torus could be built in between the Earth and the moon and would orbit 250,000 miles from earth, researchers said. The station would simulate Earth's gravity by spinning, and it would support an agriculture system, dairy farm and more for feeding the entire colony. Tiered greenhouses would be set up within the station, and solar energy would power the whole operation.

The colony that researchers envisioned could be built in-orbit. According to the video, scientists believed it would be easier and cheaper to build Torus by mining ores on the moon to use for building materials.

Torus's massive solar power satellite stations, which could even send energy back to earth, could also be constructed from the moon's materials. Indeed, a separate study, concluded in 1979 by the General Dynamics Convair Division, found resources on the moon to be so abundant that 90 percent of the materials needed for such power satellites could be found there. The study also said that these satellites would become cost effective if more than 30 were built.

Most remarkable about Torus is that some NASA engineers believed that it could be built by the year 2000. Today, the International Space Station is the closest thing we have to an orbiting settlement. However, the ISS is set up to sustain life only for the short term and is nowhere near the size of a colony like Torus.

Check out two designs (below) showing off the interior of Torus's rim, where the colonists' living area would be. 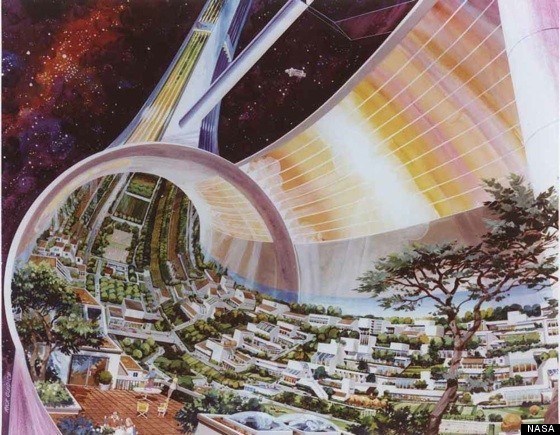 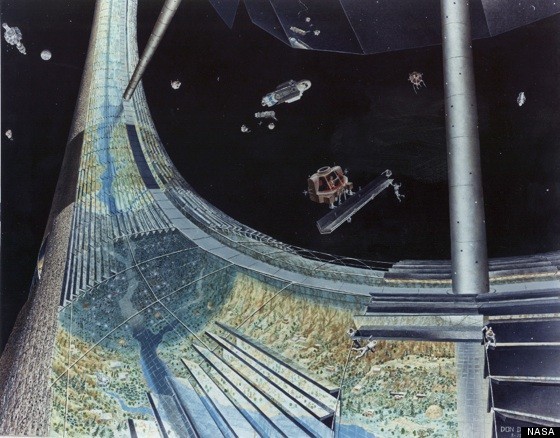 But it doesn't stop there. Another of Gerard O'Neil's space colony concepts considered by Ames researchers looked like a pair of giant cylinders, each 20 miles long and 4 miles in diameter and big enough for millions of people. The vast, lush interior was imagined to look like the San Francisco bay area. Check out NASA's other amazing orbital space settlement concepts (here).

Although, his research was funded by NASA, Gerard O'Neil eventually became a proponent of privately funded space ventures, which are increasingly becoming a trend today. For example, a Russian company recently released images of a "space hotel" it plans to launch by 2015. The pod-like accommodations will have room enough for up to 7 wealthy vacationers. Check out our slideshow of the orbital hotel (here).

Take a look at NASA's video describing the Torus colony (below).