Two polls released this week ask voters to rate a series of deficit-reduction proposals. The results show a sobering way ahead on this issue that also pleases the public. Compromise is one of the few ways forward for those prioritizing deficit reduction.

Both Washington Post/ABC and Bloomberg asked very similar questions, and found similar results. In the Post poll, not a single proposal received majority support. In the Bloomberg survey, only a quarter of the proposals tested were popular. In both surveys, an increase in the gas tax was among the least popular, as was anything described as a cut in benefits. Below are charts of their results: 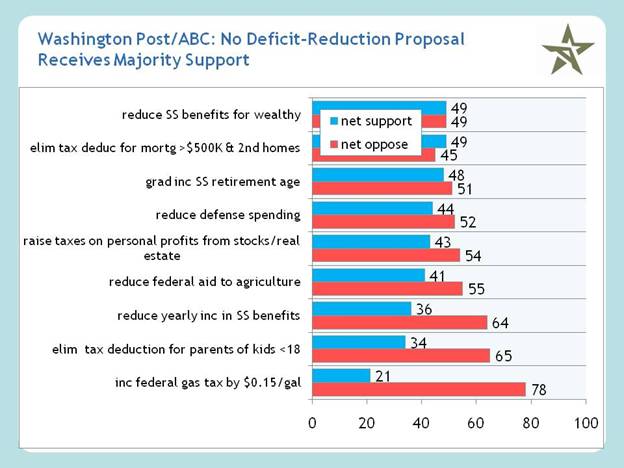 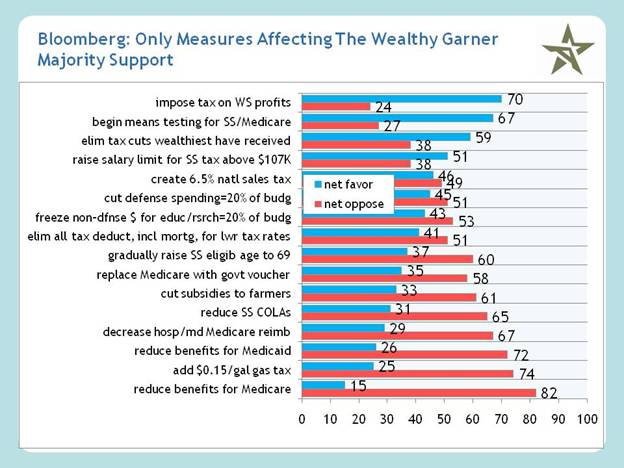 Notably, in both surveys, the most popular proposals uniquely affect wealthier Americans. And the opposite of one of the provisions in the tax package currently under debate ("eliminating tax cuts the wealthiest Americans have received in recent years") is one of the more popular proposals in the Bloomberg poll.

However, as Mark Blumenthal noted here yesterday the tax package as a whole is more popular than the sum of its components. The question wording, which in the Post poll includes the language "Obama and the Republican leaders of Congress have reached an agreement" probably moves many. Voters may be able to move past proposals they don't like, as long as the final result comes from cooperation.

But it's also likely easier to support tax cuts for others than it is to support tax or fee increases for oneself. That would explain the Post and Bloomberg results, showing voters very reluctant to support proposals affecting them directly (like a gas tax), but more willing to support proposals less likely to affect them (like a Wall Street profits tax). And in the Bloomberg survey, half (51%) would prefer a plan to bring down the deficit that "minimizes sacrifice for the American people" as opposed to "bold and fast change."

Whether Republicans are promoting bold change, or protection of the status quo for the wealthiest Americans, they will quickly run afoul of public opinion. In fact, according to the Post's writeup of their survey, Republicans begin behind their 1994 post-election levels on many measures. And given Speaker-elect Boehner's reaction to the mere word "compromise, it's no surprise over half (54%) of Americans say Republicans are doing too little to compromise with Obama.