It was a crisp Sunday in September, but we were trying to squeeze one last moment out of summer. Hooded sweatshirts zipped tight, legs wrapped in fluffy towels, toes in the sand, we watched our young son play on the beach while our baby daughter rolled around on the blanket.

It was -- until 2-year-old George stopped listening and following directions. The dump truck that belonged to the family sitting near us became much more exciting than his own. He had to have it. His swift little sandy feet made a beeline for the toy and plucked it from the other little boy. And despite the casual "Oh that's OK, he can play with it" from the mother, it wasn't OK.

We'd asked George to stay with us after he spotted the truck and he didn't listen. We told him firmly that if he ran off again we would leave and our last beach day of the summer would be over. None of us wanted that.

But then he did it again. So we left. Eyeballs stared us down as he threw the fit to end all fits while I carried him to the car. I told him we were leaving because he wasn't following directions. In between his sobs and wiping his tears, he insisted he was ready to listen. But we didn't give in. He screamed the whole ride home. 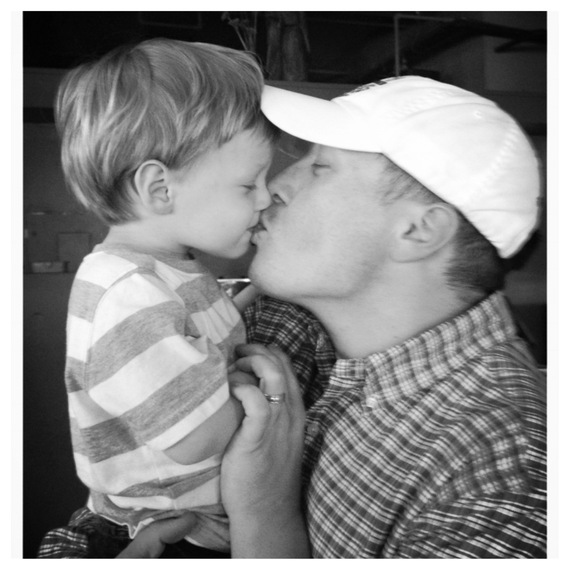 Not a day goes by that I don't think about the feelings that engulfed me when I saw our children for the first time on the day they were born.

There is no word for it.

Pure bliss is merely a start.

But when you're holding your delicate new child in your arms, what they don't tell you is how hard it's going to be to discipline this tiny, innocent human.

It's mentally and physically exhausting to be firm, to not give in, to make rules and enforce them, to not make empty threats but rather follow through and teach a lesson.

Tough love is tough on parents, too.

You do it, though, because you want to shape your child into a respectful, well-mannered adult. Someone who is humble, who says thank you, who is kind. 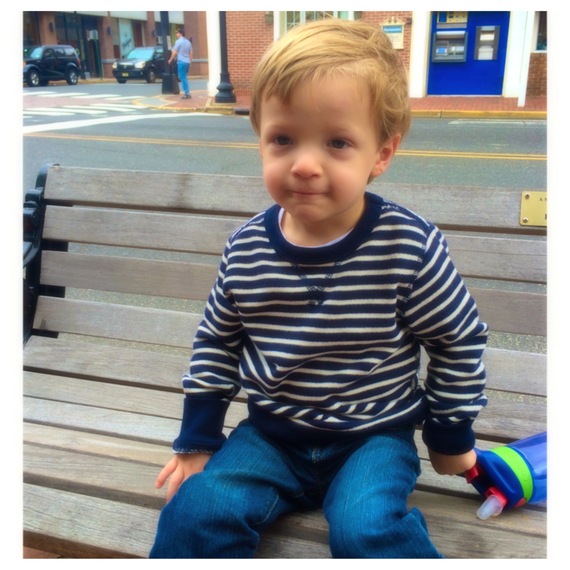 As we drove home from the beach, I thought about how earlier in the day, before the tears, my son had climbed on me in my chair and wrapped a towel around us while we snuggled and napped. His tiny voice whispering, "I love you, Daddy." "I love you, Georgie" I whispered back. It was one of the moments that make all of the exhaustion worth it. 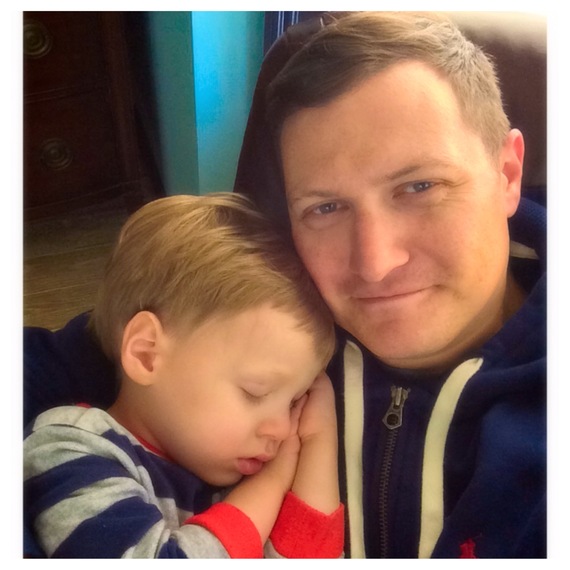 For me, maybe the hardest part of being a father has been learning to deal with that juxtaposition of feelings of love and the impulse to discipline at the same time. It hurts my heart to have to scold or punish such a small child who fills me with such joy. A child who, along with my extraordinary wife, Lauren, and our blue-eyed angel, Annette, is the reason for everything I do.

They're the reason I fly to the West Coast from New York and back for work on the same day so I can get home as fast as possible to see them, the reason I decided to get fit so that I'm around as we grow as a family, the reason I try and lift any burden I can from my wife to make her life easier. I give them everything I have as a husband and father. 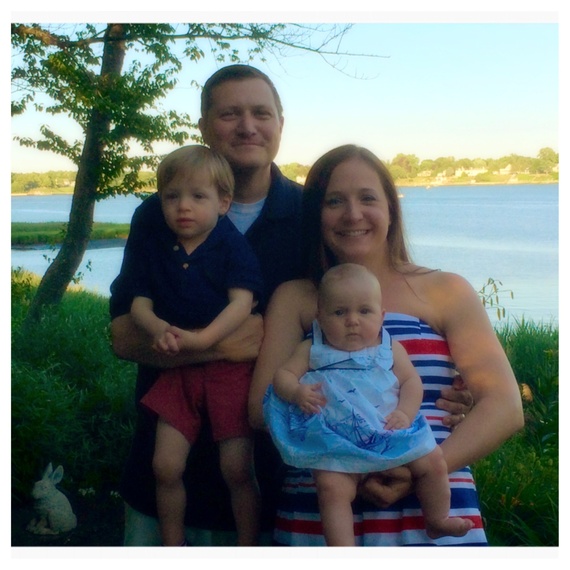 My wife and I have been married nearly 12 years. I can truly say it's exceeded my wildest dreams. We've grown together from college kids to having kids of our own.

We believe in being firm and disciplined with our children without screaming or spanking.

We believe that both free play and signing them up for classes can co-exist.

The only helicopters involved in our parenting are the ones we point out to George way "up in the sky."

We believe that it's OK to keep our son up WAY past his bedtime so he can go to a Yankee game and see his name on the scoreboard, so that one day he can have one of those, "I saw Derek Jeter play his last game at home against the Red Sox" moments.

Life can be fun yet firm. 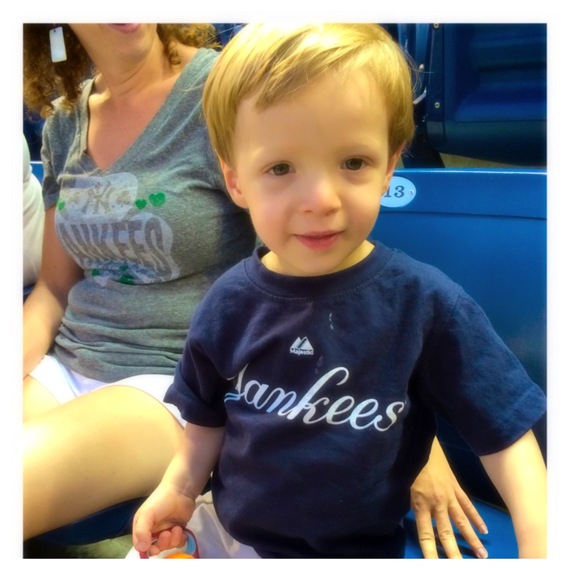 Both of our parents are celebrating their 40th wedding anniversaries later this year. We see them as examples, as guides, whom we turn to time and again for insight. Maybe the best piece of advice they've given us is, "Do what you think is right." And we do. Still, Lauren and I turn to each other a hundred times a day and ask, "What do you think?" But, for the most part, doing what's right hasn't been hard. We follow the instincts our parents instilled in us, which we, in turn, hope to pass on to our own family.

Like most 2-year-old boys, George has ceaseless energy, tests boundaries and needs help listening. Still, every day he amazes us with his non-stop chatter, his curiosity and his sweet disposition. He's a wonderful little boy and generally quite well-behaved, which makes having to discipline him all the more conflicting. In the end, though, we know it's for the best. 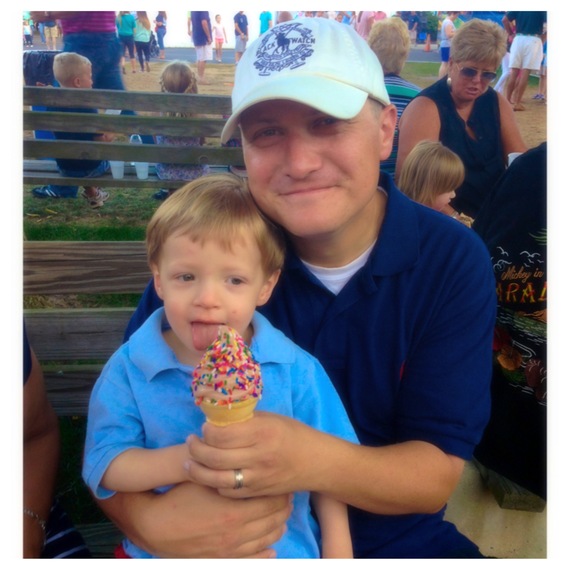 I wish it were that easy, son. Yes, I'm your friend. But I'm more than that: I'm your parent.

Love in One Photo
More:
KidsParenting parents-dadsParentsLove
Newsletter Sign Up
Raise the kind of person you'd like to know
Subscribe to our parenting newsletter.
Successfully Subscribed!
Realness delivered to your inbox