The two locations were the sites for the release of four loggerhead sea turtles with tracking devices. The four join seven other sea turtles in the Tour de Turtles race. Over 300 people gathered early in the morning at Disney Vero Beach to cheer on the two turtles they released from the starting gate to the ocean. 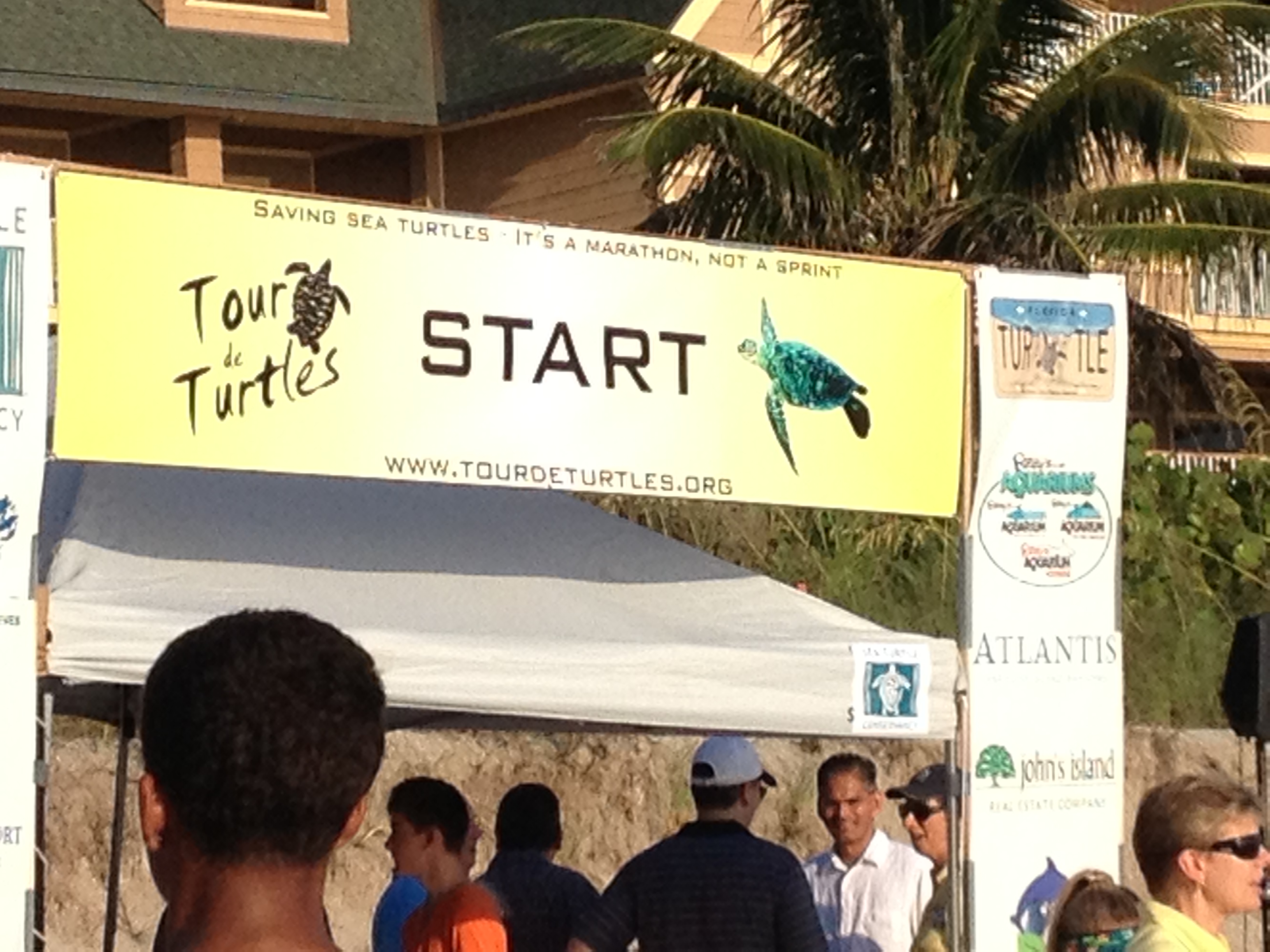 The two Disney turtles are named Carrie and Claire after characters in the Disney Monster University movie. 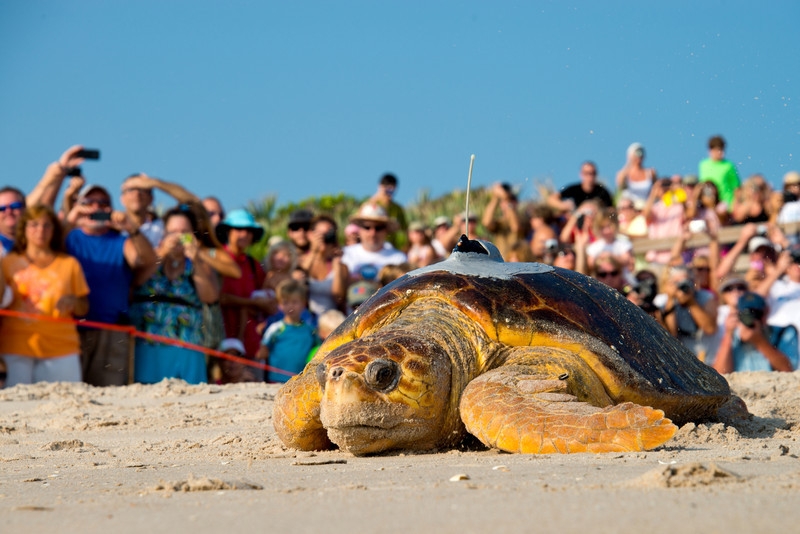 That evening, about 11 miles north, the Sea Turtle Conservancy hosted a kick-off celebration with food, drink, benefit auction, and music at the beautiful Barrier Island Sanctuary, a 34-acre preserve offering education on the diverse coastal habitat so important to sea turtles. 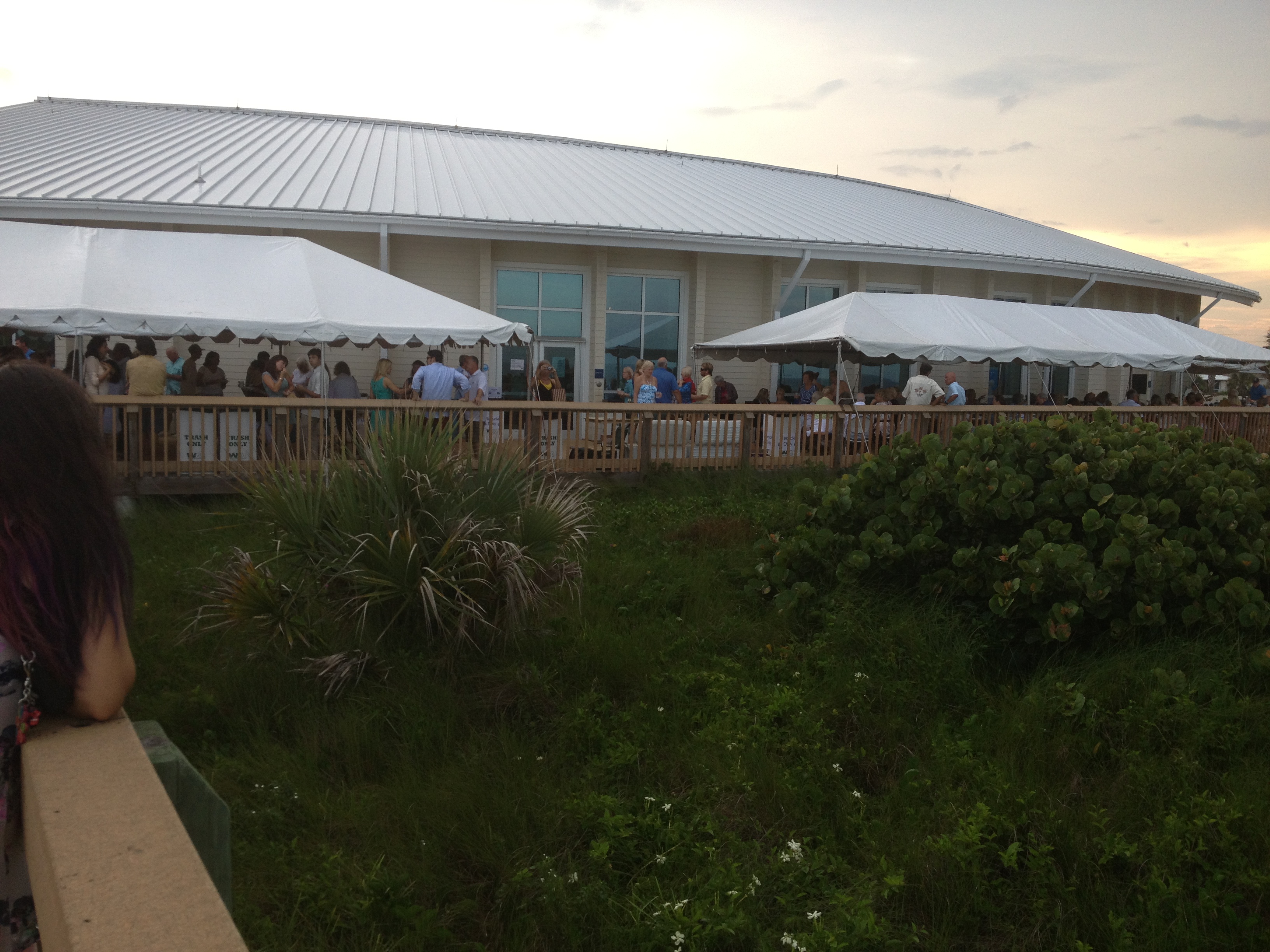 The next morning two more sea turtles, Ripley and Johnny, were released near the sanctuary.

This particular area of Florida where the four turtles were released are critical habitat for sea turtles, as 25% of all loggerhead turtles, and 35% of all green turtles nest in this 20 mile stretch of coastal habitat.

During the four days I spent in the area, coupled with a visit to the Loggerhead Marinelife Center, it became very clear to me how important sustainable tourism is for protecting sea turtles.

While walking on the beach one morning we came across turtle tracks leading up to a new nest. This is where I met Matt Hohne, Animal Operations Director of the Walt Disney Company.

At the time, Matt was marking a new turtle nest from the turtle tracks the night before. 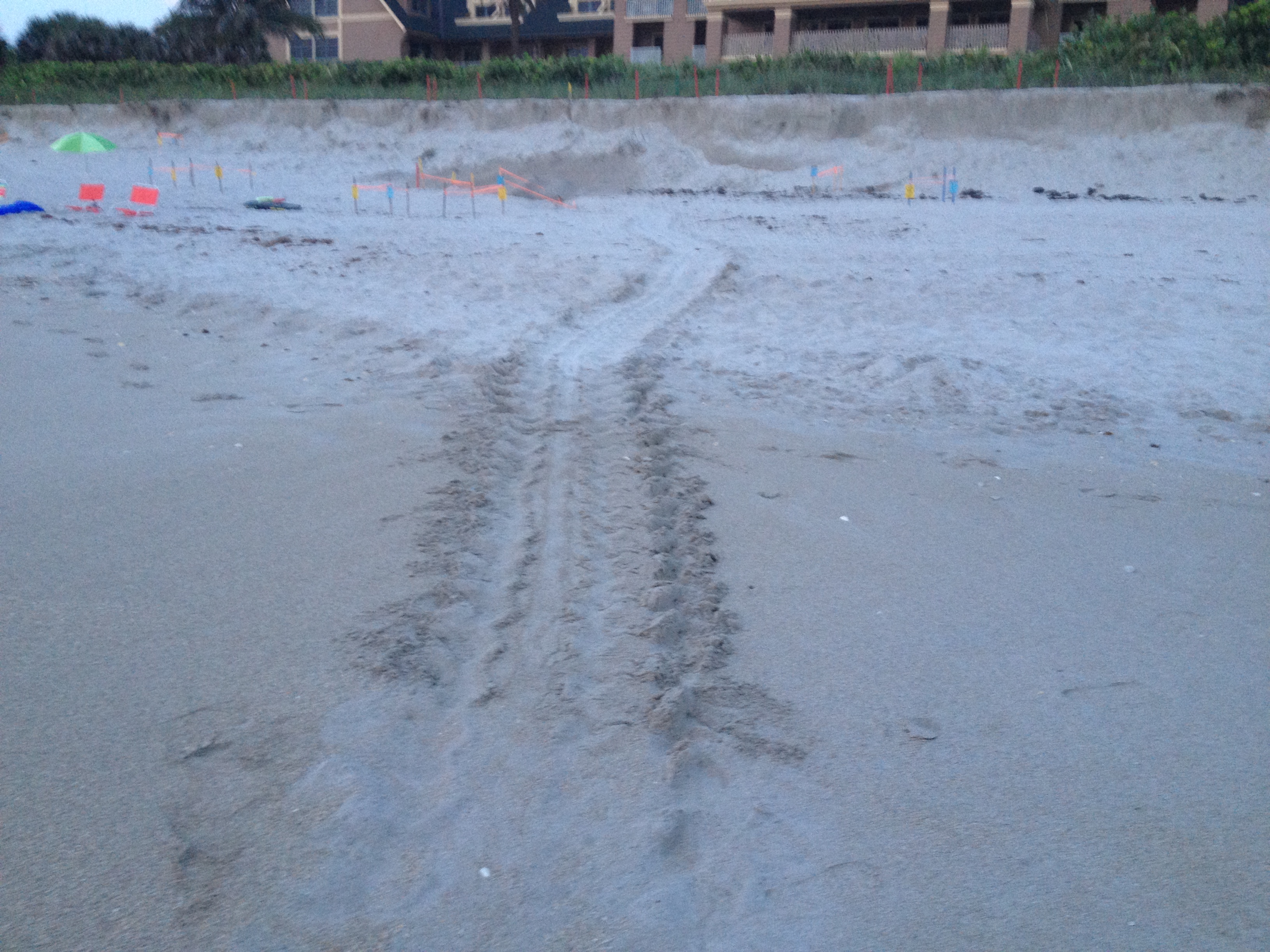 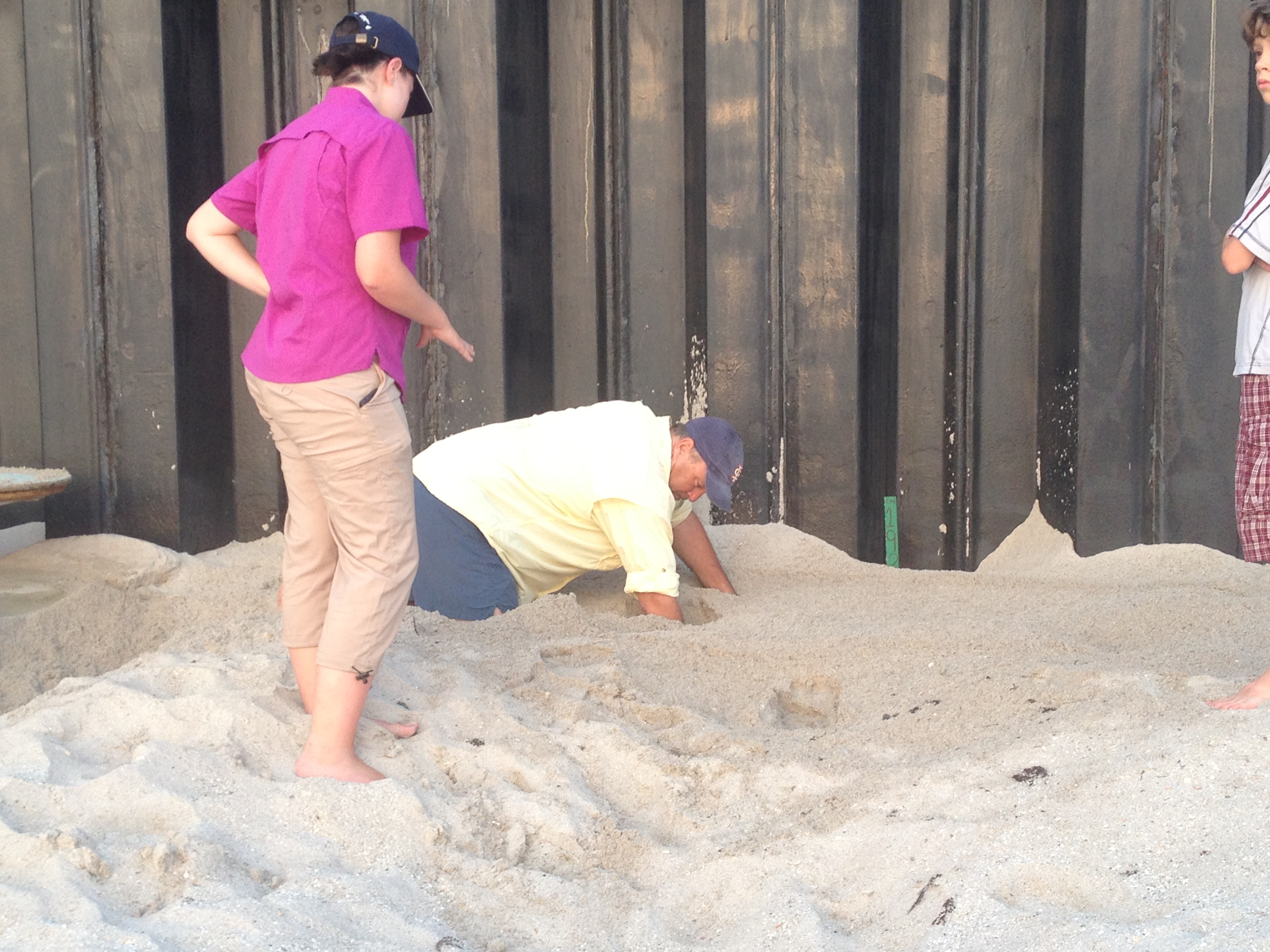 Later that evening I had the opportunity to watch about 100 hatchlings leave their nest and race toward the sea.

The next day, I had the opportunity to talk with Matt. In the video below Matt shares some of his thoughts on protecting sea turtles.

As I listened to Matt and reflected on the amazing sea turtles, I realized the male turtle hatchings that I saw the night before will rarely or never come on land again. The females who survive will return to this very spot and only come on land again to lay their eggs.
Knowing that only one out of about 1000 of these hatchlings will survive, I was moved by the will and desire of each of them to live life as they raced to the ocean, their new home, minutes from their place of birth on the beach, a habitat that humans must protect if the turtles are to survive as a species.

On my last day, I visited the Loggerhead Marinelife Center, whose mission is: "To promote conservation of Florida's coastal ecosystems with special focus on threatened and endangered sea turtles."

I toured their campus, which includes an exhibit hall, education room, sea turtle yard, nearby beach, gift shop, and medical facilities to carry out their education, research, and rehabilitation of sea turtles. Their modern medical facilities include the highest definition x-ray machine for turtles in the world, and state of the art rehab facilities and programs. The Research Team focuses on three sea turtle species, the loggerhead, green, and leatherback. 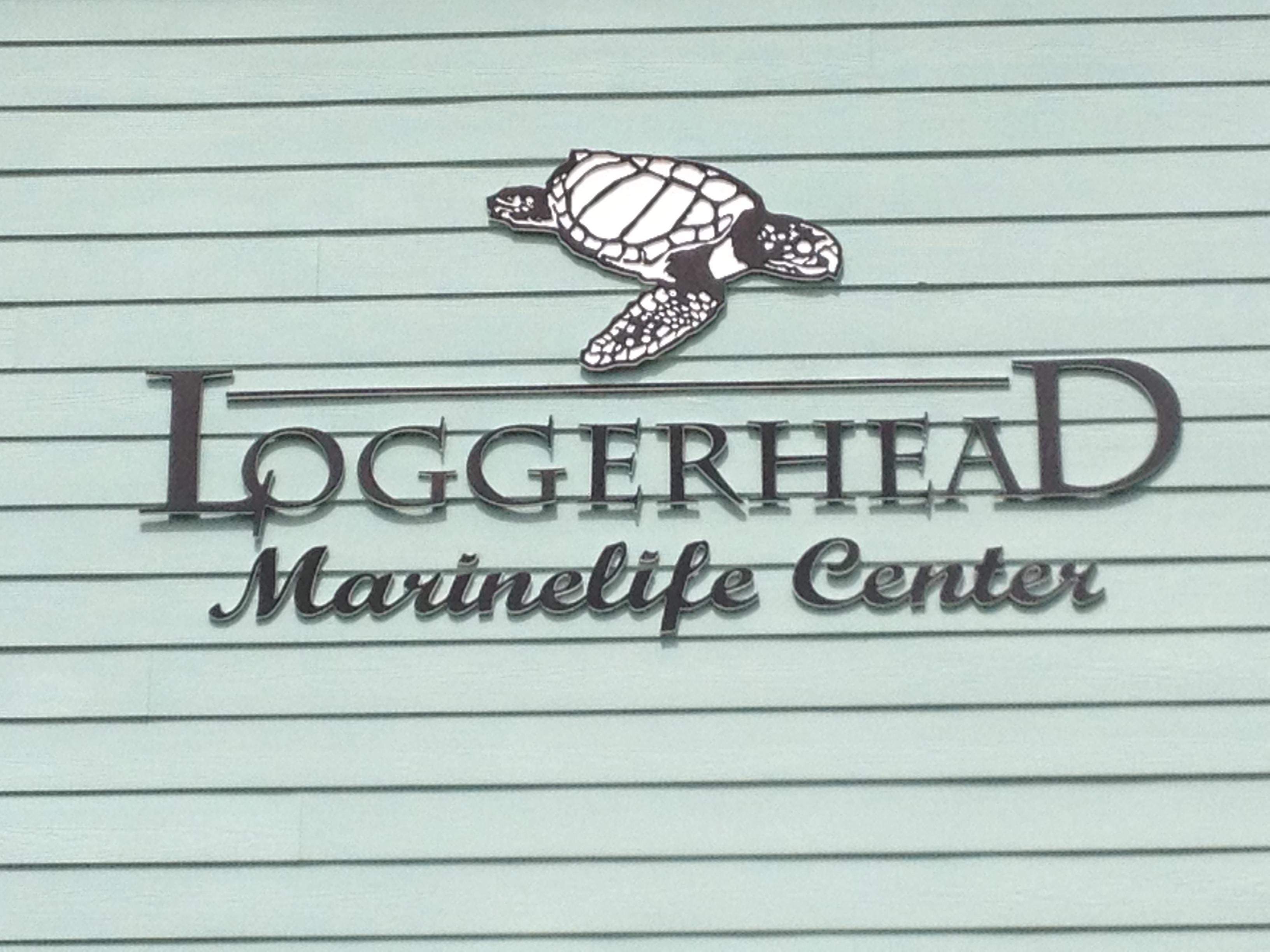 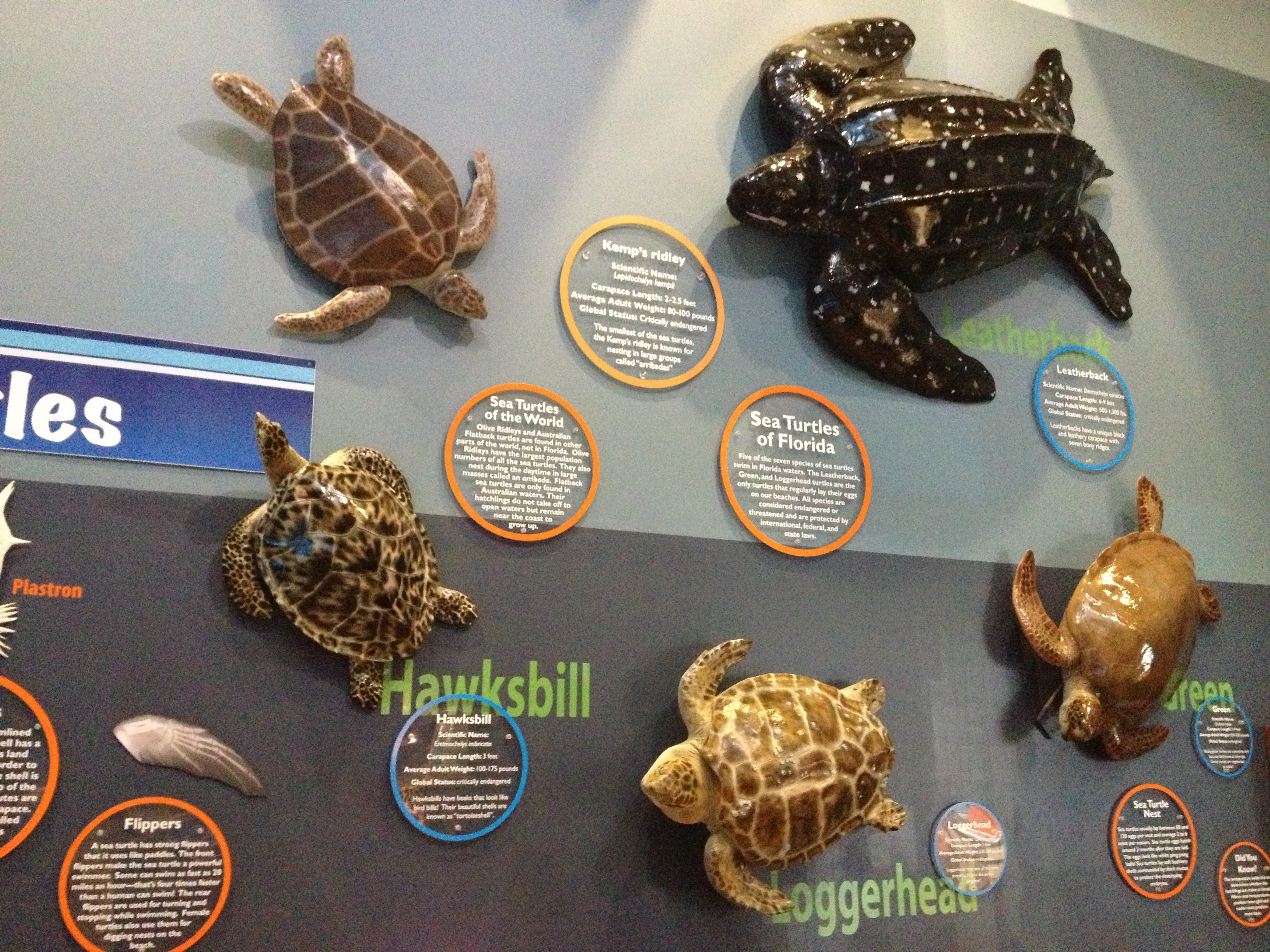 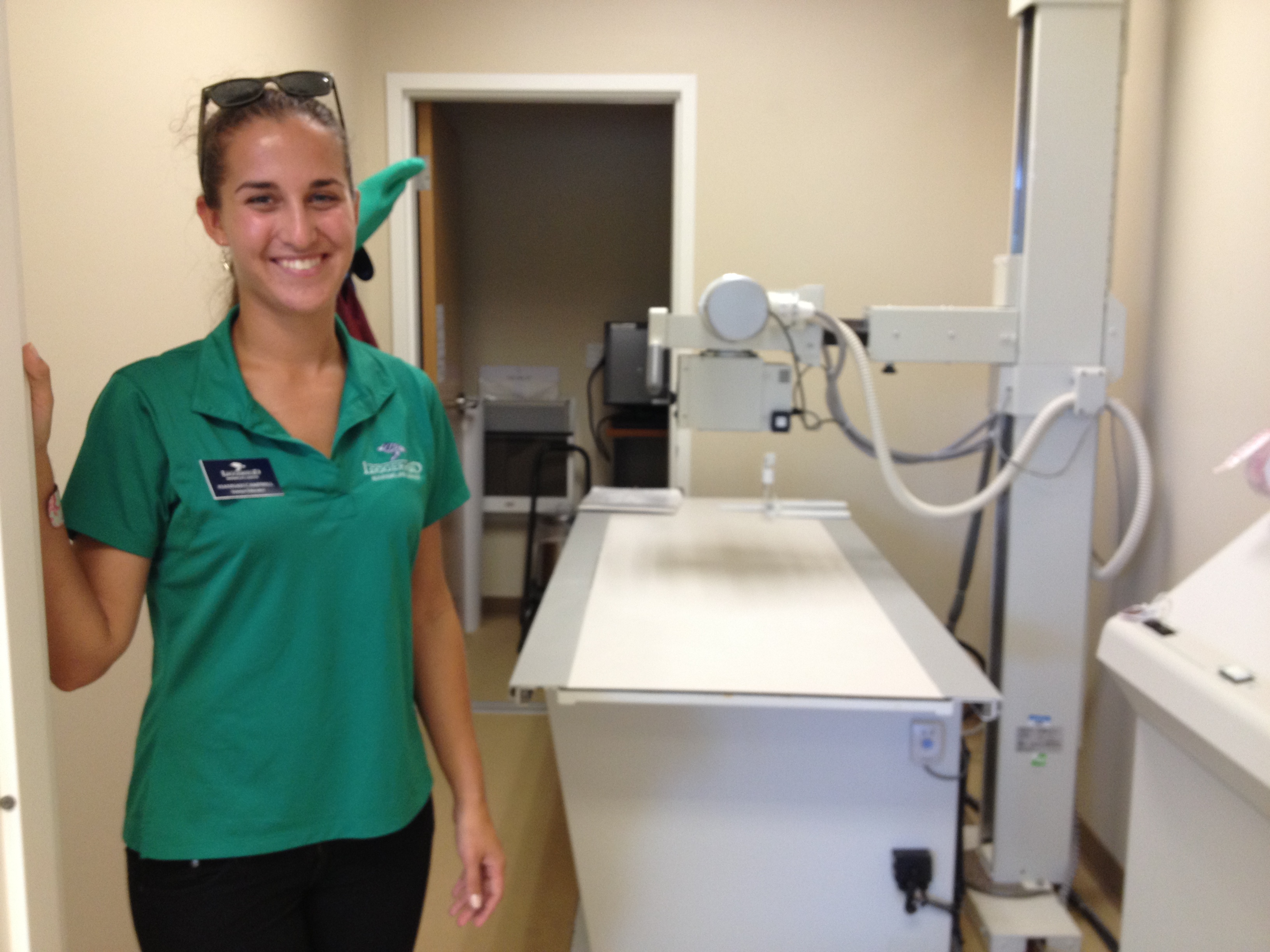 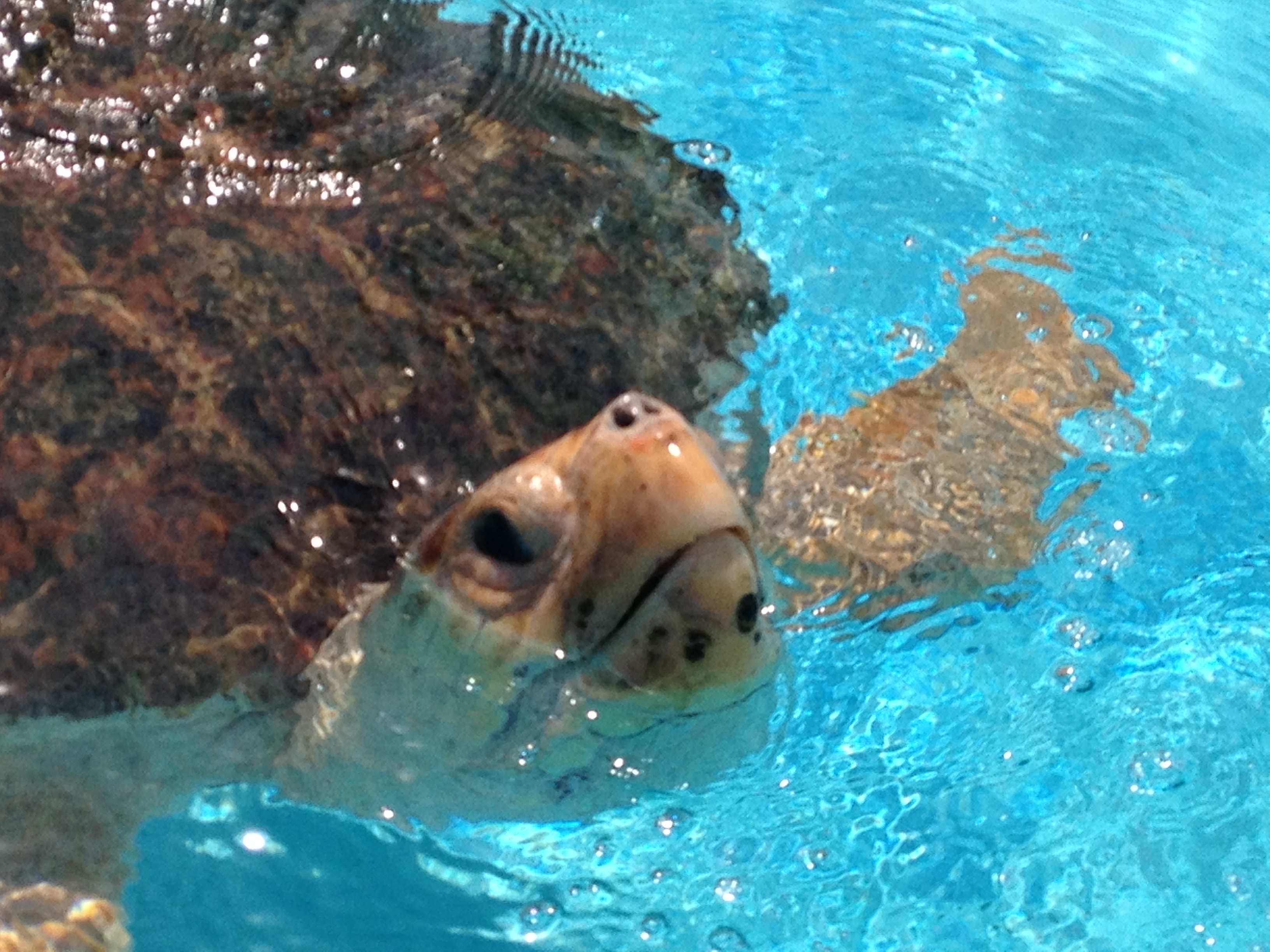 The Tour de Turtles is a way to bring much of this education I experienced at the Marinelife Center to the public through causes that each of the eleven turtles have adopted. It is an event that brings a stronger connection to nature for those who participate and foster the type of ethic needed to build a sustainable tourism industry.

The Tour de Turtles causes are all actions that sustainable tourism can contribute to.
A summary of the eleven turtles and their causes are described below:

It is estimated that more than 100 million marine animals are killed each year due to plastic debris in the ocean. More than 80% of this plastic comes from land. Thousands of sea turtles accidentally swallow these plastics, mistaking them for food. Resorts such as the Disney's Vero Beach Resort does not allow plastic straws and lids to help reduce this problem. The more tourism reduces, reuses, and recycles plastic the less threat this problem is. Reducing or eliminating plastics www.bluecommunity.info/topics/view/75645/ is a key sustainable tourism strategy.

Nesting turtles depend on dark, quite beaches to reproduce successfully. Turtles are endangered, in part, because they must compete with tourists, businesses and coastal residents to use the beach. This coastal development results in artificial lighting on the beach that discourages female sea turtles from nesting. Near-shore lighting can cause sea turtle hatchlings to become disoriented when they are born. Instead of heading out to sea, they will wander inland where they often die.

At Disney Vero Beach, where we stayed, only low amber LED lighting was on the walkways and much of it shielded from the beach by vegetation. Guests are asked to close their curtains at night so no lighting from the resort will impact the hatchlings.

Water quality is affected by chemical run-off that makes it to the sea. The ocean, while it seems so vast, had long been a dumping ground for much of the waste produced on land. From solids to chemicals and even nuclear products, waste has been dumped in the ocean. Fertilizers, pesticides and other products often make it to waterways through chemical run-off. These chemicals can seep into the soil and travel for long distances, eventually reaching the oceans where they can be carried by currents.
Water conservation and waste management programs are a key strategy for sustainable tourism to reduce negative impacts.

Beach renourishment consists of dredging and digging up sand from offshore or from inland sand deposits and pumping, trucking or otherwise depositing sand on a beach to replace what has been lost to erosion. While beach renourishment is almost always preferable to coastal armoring, it can negatively impact sea turtles in a number of ways. If the sand is too compacted for turtles to dig in or if the sand imported is significantly different it can negatively affect nest-site selection, digging behavior, incubation temperature and the moisture content of nests. If renourishment is allowed to proceed during nesting season, nests can also be buried far beneath the surface or run over by heavy machinery. Turtle nesting season in Florida is May through October.

Protecting Coastal Habitat is a key strategy of Sustainable Tourism.

Hawksbill sea turtles, recognized for their beautiful gold and brown shells, have been hunted for centuries to create jewelry and other luxury items. As a result, these turtles are now listed as critically endangered. Scientists estimate that hawksbill populations have declined by 90 percent during the past 100 years. Buying, selling or importing any sea any sea turtle products in the U.S., as in many countries around the world, is strictly prohibited by law.

Because sea turtles use both marine and terrestrial habits during their life cycles, the affects of climate change are likely to have a devastating impact on these endangered species. Climate change affects nesting beaches. With melting polar ice caps and rising sea levels, beaches are starting to disappear. As the water level begins to rise, the size of nesting beaches decrease. Stronger storms, predicted as a result of increasing temperatures, will continue to erode coastal habitats. Higher temperatures can adversely affect sea turtle gender ratio. Increasing incubation temperatures could result in more female sea turtles, which reduces reproductive opportunities and decreases genetic diversity.

Solutions to climate change all related to reducing carbon emissions. Some strategies for sustainable tourism include:

The harvest of sea turtle eggs for consumption is conducted in many cultures around the world, especially in Central America. During the nesting season, turtle hunters comb the beaches at night looking for nesting females. Egg hunters either try to encounter females deposited her eggs or look ofr fresh nests in the early morning hours. Most eggs collected are then sold, rather than consumed by the egg poacher.

Public education from the tourist industry is one of the best hopes for addressing this issue.

Although sea turtles have spiritual or mythological importance in many cultures around the world, this has not prevented humans from consuming their meat. In many coastal communities, especially in Central America and Asia, sea turtles provided a source of food. During the nesting season, turtle hunters comb the beaches at night looking for nesting females. Often, they will wait until the female has deposited her eggs to kill her. Then, they take both the eggs and the meat. Additionally, people may use other parts of the turtle for products, including the oil, cartilage, skin and shell.

Possible solutions include education of tourists and local communities, better patrolling of beaches, ecotourism based on sea turtles, government imposed limit of consumption of sea turtles.

Each year hundreds of thousands of adult and immature sea turtles are accidentally captured in fisheries ranging from highly mechanized operations to small-scale fishermen around the world. Global estimates of annual capture, injury and mortality are staggering -- 150,000 turtles of all species killed in shrimp trawls and large numbers of all species drowned in gill nets. The extent of gill net mortality is unknown, but sea turtle capture is significant where studied, and the drowning of sea turtles in gill nets may be comparable to trawl and longline mortality. Deaths in gill nets are particularly hard to quantify because these nets are set by uncounted numbers of local fishermen in tropical waters around the world.
The key solution to this challenge is requiring the use of Turtle Excluder Devices.

Around the globe, sea turtles and hatchlings alike are victim to natural predators. Crabs, raccoons, boars, birds, fish and sharks all play their role in the natural food chain. However, urban development along coast lines has introduced many non-native species that have become invasive predators for sea turtles and other coastal wildlife. Florida itself has one of the most severe invasive species problems in the United States. Domesticated dogs and cats will devour eggs and hatchlings and even attack nesting turtles. In many areas, trash left behind by humans encourages inland animals to migrate to beaches for food, further increasing sea turtle predators.

Tourists and members of the local community can address this challenge through the following actions:

Boat strikes are widely acknowledged as a significant threat to fresh and salt water turtles and other marine animals. According to the Sea Turtle Stranding Network, boat strikes have tripled in Florida since 1980. Sea turtles have poor hearing and vision when out of the water, and many times will not notice an approaching boat in time to move to safety. Turtles can be hit when they come to the surface to breathe or when feeding or mating in shallow areas. Turtles can be injured and sometimes killed by blunt-force trauma from boat impact or propellers. Turtles that do survive boat impacts may receive scars and lose limbs, and most eventually die from boat-related injuries.

Solution: Education of tourists and boaters.

Tour de Turtles started in 2008. It is a fun, educational journey through the science, research and geography of sea turtle migration using satellite telemetry. Created by Sea Turtle Conservancy, with help from sponsors and partners. The 2013 event follows the marathon migration of 11 sea turtles, representing five different species, from their nesting beaches to their foraging grounds.

The four loggerhead turtles in the area that I visited are part of the eleven total sea turtles in the event. The turtle who travels the farthest distance over a 90 day period wins. The public can track the progress of each turtle on the Tour de Turtle Page

While we may not know the outcome of the race for three months, one thing is certain: saving sea turtles is a marathon, not a sprint!

Special thanks to the Sea Turtle Conservancy for providing much of the research information for this article.