With a new game created by developer Lars Doucet, users now may be able to better understand the condition by putting themselves in the (virtual) shoes of someone with TS. 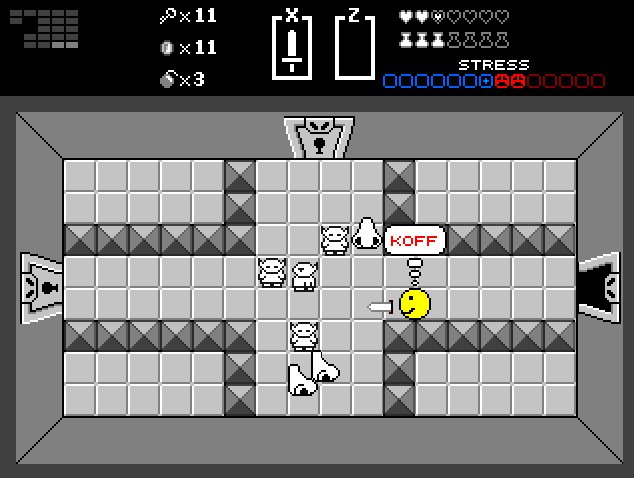 "I thought it would be interesting to explain Tourette's syndrome to people through a game," Doucet, who has the condition himself, told IGN. "It's very easy to explain what it looks like externally, but it's hard to communicate what it feels like internally. That's what I'm trying to capture with this experience. What the interior life of a Tourette's patient is like."

Doucet, who has been in the gaming business for years and was most recently the lead developer of "Defender’s Quest," said that he has struggled for much of his life to understand and manage his condition. He was first diagnosed when he was in his teens but says that symptoms began appearing when he was a child.

In an interview with the Penny Arcade, Doucet explained that his experience with Tourette's encompasses a wide variety of symptoms, including "throat clearing, eye twitches, sniffing, complicated hand gestures, coprolalia, corpopraxia, echolalia, and more."

“I wouldn’t want to say I have a representative case of symptoms, but I have a nice sort of smorgasbord of them,” Doucet said. “We call it Tourette’s syndrome, but all that means is that, I think to this day, we still don’t know what causes it.”

As he's matured, Doucet said he's learned to control some of the tics and has developed social skills that have allowed him to deal with strangers and other people who may not understand that he’s not always in control.

On his blog, he explains:

Tics cannot be effectively "suppressed" through force of will alone. At best a patient can delay tics for a while, at the cost of making them worse later. Beyond the physical challenges in living inside a body that constantly short-circuits, social spaces can be difficult to navigate, because Tourette's syndrome turns you into a very annoying human being, and there's not always much you can do about it.

These experiences are what his game, "Tourette’s Quest," is based on. 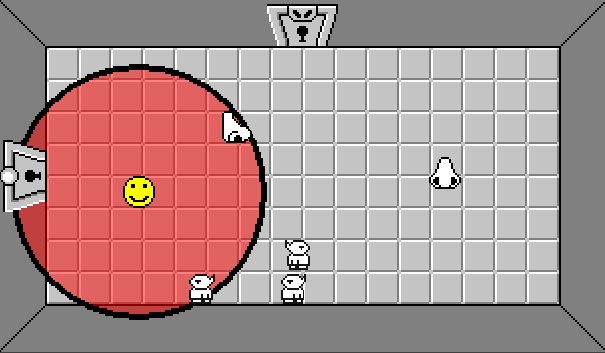 The game, which is still in its prototype phase, takes the form of what is commonly referred to as a "Rogue-like" dungeon quest, similar to the classic "Legend of Zelda" game.

As you move your yellow smiley face about the grey-tone dungeons, you not only have to make your way through rooms to reach each floor’s exit, but also manage your stress levels as you go. The more stressed you get, the more symptoms you’ll exhibit. At the moment, the only included symptom is a need to compulsively cough, but more are planned to be added as development continues.

What makes it immediately interesting, beyond the very basic stress mechanic, is that the enemies are not aggressive. What look like elves and, er, noses, move slowly around, and don’t pursue you. However, direct contact with them causes you to feel stress. Chopping up foes and picking up dropped and found coins, while not lowering your stress, does make you feel better. But throughout all this, your involuntary coughing changes things. At random, you’ll emit a big red circle as you cough, and enemies that are caught within this get worked up by it. They start to move faster, making getting past them without touching them, and indeed attacking them with your sword, more difficult.

While not necessarily sophisticated in its gameplay, Doucet's game becomes a far more poignant experience when one thinks of this as a "gaming metaphor," Penny Arcade notes.

He added, however, that the experiences with the condition that have been used for the game are his own and stressed that he doesn’t speak for anyone else with the disease.

Still, the developer said that he hopes his game will lift the shroud of misinformation that has long burdened the condition.

"Most people's experience with the condition is only through the sensationalized portrayal they see in television and movies. 'Movie Tourette's,' as I like to call it, obsessively focuses on one lurid and fairly rare symptom called coprolalia, or involuntary cursing. It's a shame the media focuses so much on this one rare thing because it doesn't accurately represent the wide range of symptom "portfolios" that present in the Tourette's population, especially given how rare coprolalia is," Doucet wrote on his blog.

In a review for a collection of stories written by people who live with Tourette's syndrome, famed British scientist Oliver Sacks said:

"We have many medical accounts of Tourette syndrome, but far too few stories 'from the inside,' stories of what it is like, what it means, to live with Tourette syndrome, every day and minute of one's life; how others respond to it, and how, finally hopefully, one may come to terms with it."