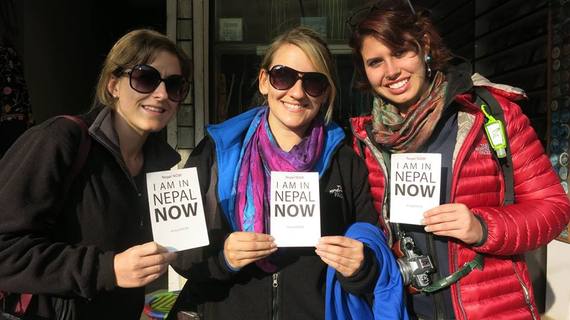 Girls from UK and US having fun at Pokhara Street Festival (Photo: Nepal Tourism Board's Facebook)

Nepal had been a nation, mostly dependent on the tourism industry for most of its GDP until the murderous civil war launched by Maoists across the nation. Until King Birendra's rule, the government empowered Nepal Tourism Board was operating throughout the nation to establish an environment to allow tourism to flourish. Later tourist flow began deteriorating throughout the country.

Nepal is today adjusting itself to its natural state of beauty and grandeur. With the recent earthquakes, Nature has devoured many of its enemies and political changes are being made with new appointments throughout the nation.

Before the civil war, travelers from all over the world like Edmund Hillary used to look for most exotic spots like Mt. Everest for daring adventures while others used to go to most remote parts of the nation like Jomsom to breathe the fresh air unstained by the modern world in its pure virginity.

During the days of civil war, all that became a thing of the past with villages filled by bloodied bodies and revolution in the streets. Tourists travelling to Nepal during this period limited themselves to secured hikings and tours sponsored by different agencies. Most of the tourists travelling after this period were not ones looking for serenity of the mountains and fresh air, but the less-costly sexual adventures in the streets of Thamels.

After Maoist's over throwing of King Gyanendra's government and the subsequent revolution throughout Kathmandu Valley, communist government began disturbing major infrastructures that made Nepal into what it used to be.

Tourism was no more the source of major GDP, but money being sent by families abroad as majority of young Nepalese left the nation in search of livelihood whether it be Saudi Arabia, Iraq, Europe or America. Majority of wealth was thus taken outside the country. Nepal was thus dependent upon revenue coming from outside during this period, which lasted for over a decade rendering the country in midst of all the evil that one can imagine.

Tourism can once again come back to its peak by following the footsteps of past national leaders. VISIT NEPAL YEAR promoted during the reign of King Birendra was one of the most outstanding program. After the nation has been cleaned with the unnecessary elements by the war and earthquake, now is the time to build a new Nepal, in all its glory.

However, the entire nation, the media and local leaders in the VDCs need to be engaged in an inclusive act. Tharus, Madhesis, Newars need to be employed in the rebuilding of every nook and corner of the nation. At the present moment, most of the infrastructures throughout the nation have been burnt and destroyed, including the police stations and army barracks. Once again, everything needs to be built again just because the SHOW MUST GO ON.

More:
traveltourismnepal
Newsletter Sign Up
An essential daily guide to achieving the good life
Subscribe to our lifestyle email.
Successfully Subscribed!
Realness delivered to your inbox