Some of the greatest thinkers today are in agreement about the power of our consciousness to alter our circumstances. From biologists to business leaders, mystics to medical professionals, philosophers to philanthropists, people are speaking out about the role of our thoughts in the unfolding of our realities. And the world of quantum physics is seeding our fertile mindscapes with findings that propel us beyond all known imaginings.

According to Physicist Menas Kafatos,"

Nature has shown us that our concept of reality, consisting of units that can be considered as separate from each other, is fundamentally wrong."

Since we are composed of cells, molecules, atoms and sub-atomic particles, this makes each of us part of one indivisible whole, interconnected and interdependent.

This is hard to put our minds around since we have constructed a society based on myths of duality and separation. Myths are the great overarching stories that we are born into-stories that help us know our place, understand our nature. Myths bridge our local consciousness with Mind at Large and the images they give us reflect our relationship to the eternal, to the earth, and to each other.

The myths of dismissal from the Garden, separation from the Divine, and murdering brothers have been the inheritance of Western civilization and they have had an impact on the creation of our society, just as the Goddess myth had an impact on our Neolithic ancestors and the creation of their society. But myths can and do change over time, and at this time in history, we are undergoing an upheaval every bit as profound as the uprooting of the Goddess and the seeding of patriarchy.

"Humanity is being taken to the place where it will have to choose between suicide and adoration,"

wrote the Jesuit paleontologist Teilhard de Chardin. The fate of the world, of every child in the world, is in the hands of those of us who populate it, and we are each at that choice point. It is time to think anew, to weave the findings of science--of our true interconnectedness, our profound and universal indivisibility--into new myths and stories that feed our souls and inspire acts of adoration.

To bring about a world of unity, a planetary community, we must begin to image it, speak it, and believe it into existence. To end war, we must begin to say war is obsolete, and it is time to ban it, just as we banned slavery, child labor, witch-burning. To protect the planet, the poor, we must begin to say--convincingly and collectively--that corporations can profit as they wish, but not at the expense of the environment, of human rights, and of the communities in which they do business. This is not a revolution against corporate tyranny, as was the Boston Tea Party. This is an evolution for corporate consciousness, and it will lead to higher profitability and more goodwill because it is the right action for this time, and we, as a people, reward actions that hearten us.

The art of original thinking is the art of thinking beyond dualities. It is the art of immersing ourselves so thoroughly in the idea of oneness that the creations, the visions, the solutions we offer the world are in the service of the whole human family. This itself is countercultural, given that we have all been born into a world where duality reigns. But we know from science now, if not from our own faith and spiritual awareness, that the notion of separateness is fundamentally wrong. As was the notion of a flat earth. As was the notion of the earth being the center of the universe. These findings caused a great tumult in the societies called upon to accommodate them, for it is never easy to realign a worldview.

And our society now is undergoing a similar upheaval as we witness and bear the breakdown of nearly every system we have created. The old ways are disintegrating before our eyes, as well they might, rooted as they were in the soil of separateness. Profit before people is a concept that will soon be history, for it fails to stand up to the tests of this day: Is it good for the whole? Does it harm the earth? Is it good for our grandchildren?

Because we are dealing with an entirely new worldview, with the creation of a new myth, based, not on separation and a fall from grace, but on oneness and an ascendancy into our true potential, the revelations of our collective wisdom will take some time to supercede the old myths and methods. They will meet with opposition, cynicism, and a wild clamoring against change. Since so many are profiting from things as they are, and since we collectively fear letting go of the known, the forerunners of change will be addressing minds that are closed and frightened. And this is the great challenge for any emergent thought leader--to know that one's ideas will be criticized and resisted, and yet to dare to speak, knowing that these thoughts are the only building blocks we have to a new and safer world.

Thought leaders do not wait in silence. Nor do they wait for others' minds to be opened, or for safe places to speak into. Thought leaders are the openers of minds, the modern day prophets who dare say "we," knowing our words spring from a place of unity. We are the new mythmakers, the new prophets and pattern-makers for a massive karmic correction. The whole world is in our hands. 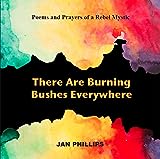 There Are Burning Bushes Everywhere
by Jan Phillips

Creativity Unzipped: Why Your Thoughts Matter
by Jan Phillips