Labor migration and remittances may bring positive economic effects to developing countries. This is the case particularly in countries like those in Eastern Europe and Former Soviet Union members where remittances constitute high shares of foreign-currency revenues and GDP. There is nevertheless clear evidence of an untapped development potential associated with those flows of labor and remittances, especially because of a lack of appropriate institutions. We argue here in favor of a creation of a migration development bank as part of efforts to fill such a gap.

Migration and remittances have benign economic effects on home countries...

Migration forces are plenty. Researchers identify macroeconomic, financial, political, family and other push factors. But most often, dire economic circumstances -- such as lack of jobs and poverty -- play the decisive role. While pointing out the strength of those factors, the most recent World Bank's Migration and Development Brief (the Brief) also mentions tighter immigration controls more recently reducing foreign migration to recipient countries. Still, with long-distance travel increasingly affordable and seamless information exchange helping find new employment elsewhere, the global migrant stock (at 250 million of global migrants in 2015) is expected to rise.

Following the rise in labor migrants, remittances -- periodic small foreign currency transfers from economically advanced host to weaker home economies--are gaining traction as "a more stable source of external finance" (WB Global Weekly, Feb 20, 2015) for developing countries. According to the Brief, such monetary transfers to developing countries reached an impressive $436 billion in 2014, a 4.4 % increase over the 2013 level, and they are expected to grow up to an estimated $479 billion by 2017.

On a macroeconomic scale, remittances seem to dampen fluctuations in consumption trends in home countries, lowering the correlation between economic output and domestic consumption. According to the World Bank analysis, in developing countries, remittances appear to be less volatile suggesting relative stability across the business cycles (Figure 1). This is true especially for countries with wider geographic dispersion of their migrants.

Figure 1. Remittance flows are less volatile than other capital flows. 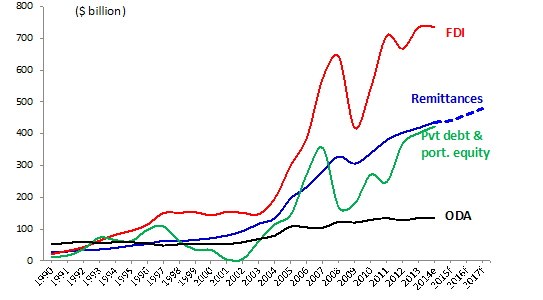 Due to the limited individual scope of transfers and lack of an institutional basis facilitating those remittances in an organized fashion, the potential for their channeling towards development is not fully explored (see e.g. Chami et al, 2008; Gevorkyan and Gevorkyan, 2012) and could be improved. Concerns over capital outflows from the host, while at the same time artificially overvaluing the home's currency, may surface occasionally, adding macroeconomic strains on a country-by-country level.

The solution to fully capturing the developmental potential of remittances might come from institutional involvement of diasporas in their home economy's development. Remittances, knowledge and skills transfers, trade, investment links, entrepreneurial capacity, as well as diaspora bonds have been lauded as strong and critical potential contributors as complements to traditional growth and development forces (Ratha, 2009). Using Eastern European transition economies as an illustration, we argue here that an expanded mandate for a Migration Development Bank -- previously introduced by Gevorkyan and Gevorkyan (2012) -- could be helpful in that regard.

... But transition economies illustrate how migration and remittances are not enough

With relevant lessons for others, we focus here on the economies of transition of Eastern Europe (EE) and Former Soviet Union (FSU). Despite profound social and economic transformation over the past two decades, the long-awaited, post-socialist macroeconomic miracle has largely remained just that, a miracle to be materialized. Notwithstanding some growth, both poverty and inequality rates on average remain stubbornly high (Figure 2).

Figure 2. Poverty rates (% of population) and GDP per capita (PPP$) in EE/FSU 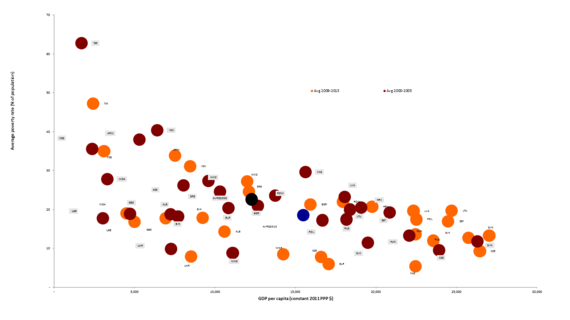 Labor migration and income derived from that offer a poverty alleviation alternative in the face of inadequate local job creation and income growth. The question is especially acute in the smaller EE/FSU, net importer economies with consistent current account deficits and labor migrants as their main export -- see Gevorkyan (2013)

The primary intakes of the region's labor migrants are Russia, Kazakhstan and for a brief period Ukraine -- the net exporters (and larger economies). Some migration, primarily of better-educated and skilled workers, mainly from the net importers' urban centers, as well as from smaller Eastern European economies, is directed towards destinations in Europe, Middle East and North America -- e.g. see a case study of Armenia in Gevorkyan et al (2008).

Total monetary transfers to the EE/FSU, largely from Russia, were estimated at approximately USD 73bln in 2014 or roughly 13% of overall world's remittances. For households in the net importers the role of labor migration assumes a greater significance. This is seen in remittances' shares in countries' GDPs: up to 40% of GDP in Tajikistan in 2013; 31.5% in Kyrgyzstan; 25% in Moldova; 21% in Armenia; 12.1% in Georgia; 11.7% in Uzbekistan; 10.6% in Bosnia & Herzegovina; etc. See Figure 3.

Their dependence on a major host economy also points to a dependence on the Russian economy's cycle. According to the Brief, remittances to the region from Russia have fallen by an estimated 6.3% in 2014, following a strong 11.1% increase in 2013. The countries that need them most have seen the worst drop in remittance transfers (e.g. fall in Armenia by 31%, Tajikistan by 27%, and Uzbekistan by 43%, etc.). The recent economic downturn in Russia -- and corresponding job losses by immigrants -- combined with the ruble depreciation have been responsible for such decline. 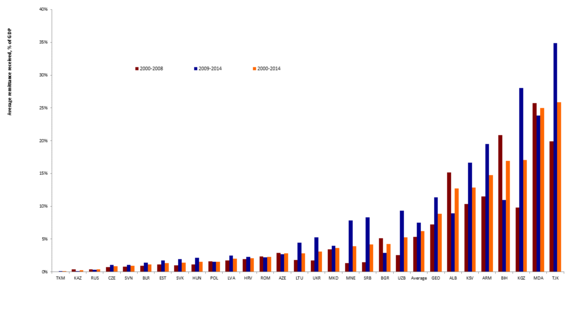 While labor migration from and remittances to EE/FSU economies have been key economically positive factors to their performance, they have fallen short of being enough to sustain growth and poverty reduction as necessary. It follows that one might look for ways to boost their contribution to the latter objectives.

So what might be some of the solutions relevant in the EE/FSU region?

First, aside from blank remittances transfers, there is scope for continuation of so-called "soft" aspects of the diaspora-home engagement, through joint exchanges in education, culture, business and other spheres (e.g. Newland and Patrick, 2004).

Second, on top of a natural flow of "soft" and business exchanges some institutionalized proposals involving diaspora aimed toward development may include the following:

• Diaspora sovereign bond issuance -- tapping diaspora's appetite for longer-term investment (see Chander, 2001; Ketkar and Ratha, 2010; and Gevorkyan, 2013). • Temporary labor migration may be coordinated - as e.g. proposed by Gevorkyan and Gevorkyan (2012) - via a Diaspora Regulatory Mechanism, engaging the "old" (as employers in the foreign-F-economy) and the "new" (migrants from the home-H-economy) via a coordinated temporary labor migration process with diaspora centers (in host) and recruiting agencies (in home) on the basis of bilateral treaties (Figure 4) - see Chander (2001) and Gevorkyan (2013) on the relevance of distinguishing "old" and "new" diaspora groups. • Diaspora micro-loans to rural areas or diaspora-business funded basic income type programs may be another way of proactive involvement. Either of such arrangements may be advantageous in particular for the post-socialist economies with limited presence in the global capital markets and lacking significant foreign direct investment inflows. • And, critically, a Migration Development Bank established in the home economy or as a bilateral entity (with the host economy that is the largest labor migration destination)--as a conduit for organized (as opposed to currently random and speculative) financial transfers.

We believe the formal and expanded structure of a Migration Development Bank (MDB) deals with the above offering the appropriate functional model towards inclusive development in the EE/FSU. Integrated within the Diaspora Regulatory Mechanism of migration (Figure 4), with its primary design to facilitate remittances flows, the MDB would be in a position to create opportunities engaging in home country development projects in infrastructure, education, healthcare, poverty alleviation, etc.

The range of specific projects financed by MDB is effectively unlimited but would be shaped by the scope of peculiar development EE/FSU problems on a country-by-country basis. Tackling the challenges at the base of economic underdevelopment in the region, there would be a real capacity to stem the labor force exodus, strengthening the net importers' macroeconomic foundations. 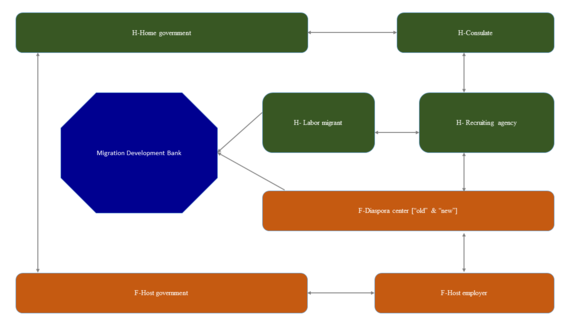 Funding sources for the MDB projects would be savings accumulated at the bank from temporarily unclaimed deposits, bilateral state transfers, new direct loans and borrowing from regional and international financial markets, as well as by partially reinvesting earned interest. Barring the option of remittances securitization, the MDB may involve in low risk financial operations with a modest guaranteed return.

As speculative as the MDB proposal may sound, following the financial crisis, a bilateral government deposits guarantee or multilateral development agencies involvement in the MDB charter might offset some of the risks by ensuring operational transparency. Further transparency may be secured engaging diaspora members in a Diaspora Supervisory Board of the MDB. This would also be a policy setting and decision-making entity within the MDB's structure.

Assuming a home-host country bilateral agreement on the MDB, the bank might leverage its credibility and stability status by attracting institutional diaspora and non-diaspora investors into the smaller, net-importer, economy. The EE/FSU countries involved in international migration, host and home, stand to benefit from a well-functioning MDB. But the model is adaptable elsewhere as well.

Establishing the MDB would be a significant breakthrough, tapping into new, yet unveiled diaspora investors who are otherwise hesitant to enter the relatively unknown market or with no means of procuring a reliable local partner, yet altruistically driven to make a difference in the historical home country. For the non-diaspora investor, unfamiliar with the locale but seeking their portfolio diversification, MDB offers a safe alternative of transparent and direct funds allocation as an initial market entry (on market access challenges in small transition economies see Gevorkyan, 2014).

Host economies may also derive benefits from the MDB structure, as some of the funding may be directed towards better administrative and regulatory facilities in the host's labor migration sector (e.g. financing diaspora centers, publications for labor migrants, efficient fast-track immigration screening and border controls, etc.).

The capacity -- combined value of growing remittances transfers and accumulated financial potential from various engagements of the diaspora -- would definitely be in place. What is needed at the moment is an internationally recognized and functional institutional financial framework that would systematize the positive economic impacts of migration and remittances for developing countries while smoothing capital and labor flows.