National Suicide Prevention Month is an appropriate time to talk about something that puts adolescents at increased risk for suicide: adoption. 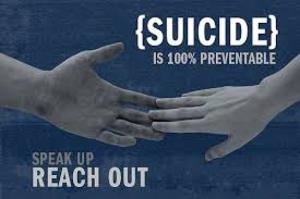 Attempted suicide is more common among adolescents who live with adoptive parents than among adolescents who live with biological parents. The association persists after adjusting for depression and aggression and is not explained by impulsivity as measured by a self-reported tendency to make decisions quickly. (Slap, et al., Pediatrics, Vol 108, No. 2, August 1, 2001.)

In addition, a Swedish study found international adoptees were more likely than other Swedish-born children to attempt and to die from suicide (odds ratio 3.6, 95% CI 2.1-5.9); attempt suicide.

The adoption-suicide connection is too often excluded from discussions and scholarly discourse about suicide or about adoption. Maureen McCauley Evans, M.A., an adoptive parent working in the adoption field, notes that:

"Talking about suicide is hard and uncomfortable. Talking about it in connection with adoption - which often has much joy but is more complex than people realize - is challenging."

It's also a difficult topic within the adoption community because adoptees take great umbrage at studies that seem to "pathologize" them. The statistics, however, that indicate adoptees far outnumber non-adopted youth in all types of treatment facilities, for instance, do not cast blame on the adoptees, but on the institution of adoption, and more specifically on the separation that precedes the placement.

The fact is that 4.5 percent of adopted individuals have problems with drug abuse, compared with 2.9 percent of the general population. Sharon Burns-Carter, a certified addiction counselor, facilitates recovery groups at the Wellness Resource Center in Boca Raton, Florida, which she co-founded. Her experience of up to one-half of clients being adopted is common among those who work with such populations and is a far higher a percentage than the mere 2% of the population who are adopted.

"So what does it feel like to be adopted? A weird amalgamation of rejection and acceptance. Someone's trash is someone else's treasure... It's been difficult for me to accept that my parents actually love me, and that they're not just putting me on a shelf somewhere to gawk at and to call their own. I'm still figuring it out."

McCauley Evans describes three reasons for the disproportionately high percentage of adoptee suicides: 1) Adoption - or more precisely the separation from one's mother - is a trauma. 2) Adoptees lack a complete and accurate, up-to-date medical history which may include depression, or even suicide. 3) Adoptees don't want to upset their adoptive parents with concerns about depression or anything that could be seen as ingratitude, including normal, healthy curiosity about their roots.

Elle Cuardaigh adds to these factors a less tangible, less obvious, and at the same time deeper root cause of adoptee sadness that leads in too many cases to taking their own lives. Elle is an adoptee who has an "inside track" on the phenomenon, having (she says) "pondered suicide" herself:

"We weren't born, so death is of no consequence.

"There is a certain detachment to adoption. Being 'chosen' rather than 'born to' does it. Because we did not arrive by natural means, and so much mystery (or outright lies) are our baggage, we often feel not only that we do not fit in, but that we are disposable. That's the thing about being chosen, you can be unchosen. And some adoptees aren't going to wait for the dismissal; they are going to finally take control of their life by ending it."

Elle felt death was of no consequence because she felt as if she had never been born, having not been born into the family who raised her. Harris Sockel shares another reason why life is more precarious and death more easily anticipated for an adoptee, writing:

"I have no clue re: diseases that run in my family; I might drop dead in ten years from a heart attack or some obscure cancer." 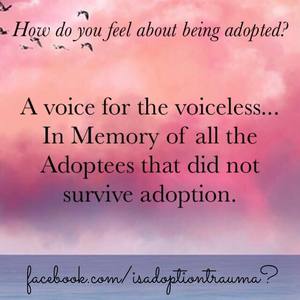 What Elle calls detachment, I have described as a feeling of disconnect, not just from one's family of origin and cultural heritage, but from humankind, having no one who mirrors you while growing up to form a sense of identity and self-worth. Many adoptees describe intense feelings that arise when a child is born to them as a result of seeing someone biologically and genetically connected to them for the first time.

Adoptees often express feeling alien, or as if they were "hatched," not born. An adoptee identified only as Quora, placed weeks after birth, described a feeling of "other- worldliness." Quora writes:

"As an adopted child, I have always had a sense of never really belonging anywhere. ... A sense of transience. I lack the security of being able to look at those around me and think 'he has my nose', 'I have her eyes', 'we all look alike'.

"For those well-rooted in their families, tied by a common bond, that is probably a difficult concept to understand.

"Tonight, being adopted has made me feel too different, more isolated."

Adoptees also lack a recognizable source for personality traits, temperament, and abilities. It's difficult to feel connected without knowing where you inherited your love of playing music, or curly hair, or shyness, or why everyone in your family is athletic but you.

In addition to detachment and disconnect, Elle writes of being disposable. When one's parents and heritage have been treated as disposable and interchangeable, why not feel that way about yourself? If you were given away once, why wouldn't you logically fear you could be again?

For some, the loss inherent in having been transplanted is on a far back burner, and they have the resilience and temperament to lead perfectly happy lives. Some choose to simply accept that their adoptive family is the only family they need and dismiss any curiosity as unimportant, often out of a deep-seated fear of rejection, described by Linette, a 29-year-old member of AA in Oakland, California, as a "deficit of being given away." When people in her life leave, she feels panicked, saying: "I think the base of my existence is this abandonment and fear."

After all, if the parents who brought me into this world didn't want me then, why would they want me now? Wondering why their mothers haven't come looking for them can haunt some adoptees even when logic tells them that to do so would be very difficult, if not impossible, for a mother from a developing country, for instance. Others struggle to come to grips with a paper trail that ends with the word abandoned, which may or may not be true, as many victims of trafficking are labeled in this way. 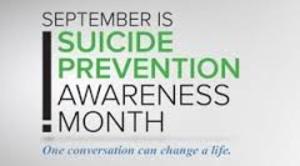 This past month, two 12-year-old boys, both adopted from Ethiopia, and living in different states, took their lives. I join McCauley Evans in calling all who work in adoption and all who see adoptees in treatment settings "to make suicide awareness and prevention - especially as it relates to adoptees - a fundamental part of their training" and services.

If you love someone who is adopted, be aware of this risk factor. The best thing we can do for our adopted children, friends, siblings, and spouses is listen and validate their sadness as a normal and natural need to know why.

Read all the books and blogs by adoptees you can find. Read "10 Things Adoptees Want You to Know" "10 Keys to Healing Trauma in the Adopted Child."

If your adopted child's family is known to you, or if you might be able to find out, put aside fears of alienation of affection and open your adoption for the sake of your child. It could be the best, most important gift you can ever give him. Many adoptees experience a feeling of wholeness and peace upon reconnecting with their origins.

Search and reunion - even when "successful" - usually come too late in life for adolescents, who are at highest risk, and cannot undo the harm caused by a lifetime of loss, pain, and trauma. Finding answers, filling in the missing puzzle pieces, and replacing fantasy with truth can heal; though it cannot cure. For those who have held onto magical thinking about a reunion fixing all the problems of their lives, it can be anti-climactic.

Adoptive parents can also help by avoiding "chosen" stories or telling young children that their first mother loved them so much she gave them to their new parents - either can lead many children to fear being given away again. "Gotcha Day" celebrations can also be painful, as can events like large family reunions, weddings, and births. Words like "lucky," "rescued," or "saved" place an undue obligation on a person who did not ask to be removed or to fulfill his parents' desire for a family. No matter how subtle or unspoken the message, no child should feel expected to be grateful for having been adopted. Nor should adopted children be made to feel disgruntled or bitter for having a very natural human interest in their roots.

A 13-year-old adoptee named Jess describes feeling "kind of lost" and experiencing a crippling fear of rejection. Jess feels "painfully conscious of an invisible line dividing her from family, friends and colleagues" which sadly makes her feel guilty because she had a "wonderful upbringing and amazing parents."

Some adoptees today become aware of a bigger geopolitical picture of rampant corruption and trafficking for, adoption. Recognizing that every adoption begins with a tragedy - that families in need fail to be helped, and instead are exploited as a source of children as a commodity in great demand - is disheartening.

As McCauley Evans has said, adoptees need to feel that they have "permission" to talk about their feelings and that it is safe to ask any questions about their genealogy without hurting their adoptive parents and risking being rejected, again, or feeling "disloyal." Adoptive parents need to create an open atmosphere, letting their children know that it is OK for them to wonder and question, or to feel and express anger.

Adopted children come with an underlying primal wound resulting from loss and grief with no ritual mourning or recognition. Feelings of abandonment and rejection are exacerbated by lack of recognition, according to Nancy Verrier, author of Primal Wound.

Lack of questioning is not an indication of being well-adjustment or lacking curiosity. An adopted child, adolescent, or young adult may be suppressing feelings or simply afraid to hurt his adoptive family. Wise adoptive parents initiate "The Talk," as did the mother who observed her son gazing into the mirror and casually said: "I bet you wonder who you look like. I do."

Mothers who have lost children to adoption can help by being available and accepting of their offspring who find them and providing the answers they seek. Support groups such as Concerned United Birthparents (CUB) can help found mothers overcome feelings of shame and guilt and assist them with "coming out" to their husbands and subsequent children.

The best way to prevent adoptee suicide is to accept that your child comes into your family with an existing family and, very possibly, with grief over losing them. Honor her grief, encourage him to verbalize his anger, and embrace their kin despite your fear.