Over 200 people packed the Chopin Theatre on Tuesday night, February 12 to hear about Tax Increment Financing (TIFs) and to organize themselves to do something about them.

The TIF Town Meeting was produced by a new organization, the Tax Integrity and Fairness Alliance, TIFa, an open group dedicated to educating people about the way Chicago's finances work and to exert more public control over the budgeting process. 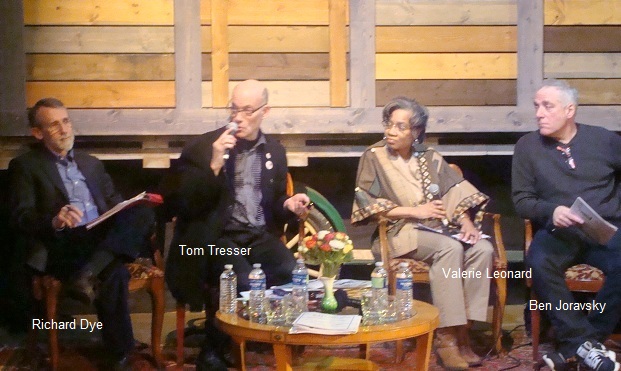 The moderator was West Side organizer and community development expert, Valerie F. Leonard. The panel members were Professor Richard Dye from The University of Illinois, who has done extensive research on TIFs, including one relevant study entitled "TIF districts hinder growth: Study finds that cities without TIFs grow faster;" myself, an educator and anti-privatization organizer; and award-winning political reporter Ben Joravsky.

The purpose of the forum was to shed light on the TIF program and get people organized to do forums in their own communities and to investigate the full impact of TIFs on a ward-by-ward basis.

"TIFs were originally created to keep tax money within a "blighted" district and use it to redevelop that area." Said forum co-organizer David Orlikoff of the Chicago Teachers Solidarity Campaign, "But since the introduction of TIF districts in Chicago in 1986, about half of the $4.5 billion extracted from general tax funds has gone to private development projects, many of them far from blighted communities. Major corporations receiving TIF funds include Hyatt, Target, Coca Cola and United Airlines. That comes at the expense of Chicago Public Schools, libraries, parks, and other public assets."

"Last year, TIFs took about $250 million from CPS," says TIFa co-founder Steve Serikaku, a retired Chicago Public School teacher. "That could have covered the costs of the new contract several times over. It could pay for more teachers, social workers, clinicians and others who directly help children."

Each of the speakers made a number of telling points.

Leonard, who was a candidate for Alderman for the 24th Ward, said that as a citizen of West Lawndale she was from "ground zero for bad government, school closings and TIFs that don't work." It turns out that the 24th Ward is the #1 most TIFed ward in the city. Eighty-six percent of it is in a one TIF district or another.

In her decades of experience working with the city and community groups, she has found no comprehensive economic development plan for her area and for the city, which would use TIFs in some rational and beneficial manner.

Dye pointed out that TIFs are very "seductive" for cities and politicians to use but that were, really, "a hidden tax, hidden debt and hidden governance" that are very difficult for citizens to track and evaluate. His research on 200 Chicago suburbs could not find any conclusive economic development value from TIFs. Rather, they "move economic value around inefficiently rather than create economic value. And in some cases actually cause property values outside of the TIF districts to decline."

Professor Dye stated that TIFs "are not economic development plans, but rather finance plans. TIFs don't improve the skills of local economic developers but really segregate dollars for wide use." He made the point that TIFs in Chicago are not working in our most blighted areas, which is what they were created to do. As a nationally known scholar of local government finance, the professor wryly reported that when experts from around the country gather to discuss TIFs that "Chicago is the poster child of TIF shame."

Chicago Reader political reporter Ben Joravsky has led the way on TIF reporting for many years. He confesses to be "obsessed' by TIFs and often recall his first TIF conversation with the people that he meets. "It's one of the greatest scams perpetrated on Chicagoans," he stated. "In the abstract, TIFs would work to help blighted areas. But we don't live in an abstract world. We live in the city of Chicago."

Joravsky went on to say that TIFs are a tax "we all pay" as they push up the property taxes extracted by all the units of government that are deprived of property taxes via Chicago's 163 TIF districts. He observed that Mayor Rahm Emanuel proclaimed himself a TIF reformer and empaneled a reform commission early in his term, but that nothing of substance had come of it. Download the 101 page report here. He said the mayor "is a holding pattern regarding TIFs because the he realizes that the public is aware that TIFs are a bad program and a scam." So, unlike the former Mayor Daley, the current mayor is not aggressively expanding TIFs.

On the other hand, one TIF-fueled development is going forward that particularly rankles Jarovsky. He has written about the $29 million from TIF funds being lavished on the developers of the River Point project off Lake Street. He has written, "In the TIF program, the city diverts over $200 million a year from the Chicago Public Schools -- currently about $1 billion in debt -- to fund much-needed economic development and eradicate blight in low-income neighborhoods. Of course, in the case of River Point, the area is neither low-income nor blighted. It is instead in River North, one of the hottest real estate markets in town." On the subject of cause and effect, Joravsky pointed a finger to us all when he observed "My problem is with the people of Chicago who keep electing the same people and expecting different results."

My own presentation was on the results of the CivicLab's investigation of the 12 TIFs inside the 27th Ward. The CivicLab is a new project that is gathering activists, educators, coders and designers to collaborate on innovating and tool building to accelerate civic engagement efforts. We have organized the TIF Illumination Project to investigate the impacts of TIFs on a ward-by-ward basis.

The TIF Illumination team (all volunteers) include coders, researchers, writers, designers and activists. We have been able to gather data to tell the story of what TIFs are doing in the 27th Ward in a wholly new way. You see the full presentation here with the accompanying audio (23 minutes). [http://tinyurl.com/27thWard-TIFs] 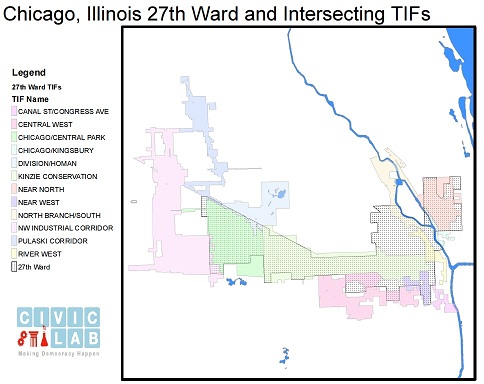 Here is how much property tax each TIF extracted from the 27th Ward in 2011: 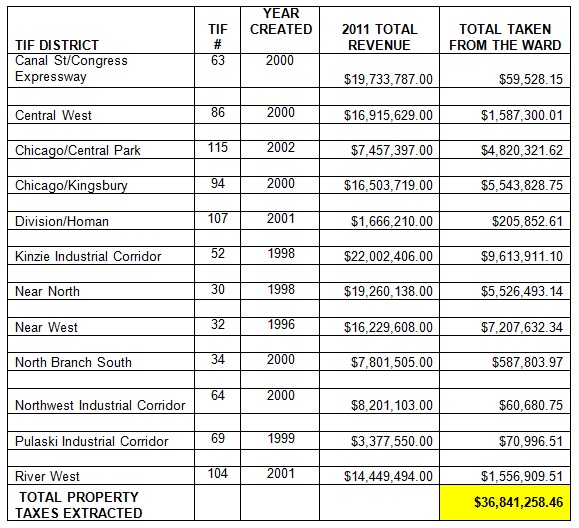 Each of those 12 TIF districts had a year-end balance at the end of 2011. That total was $398,514,266. Performing the same PIN-based operation on that total, we deduced that the portion of that total that "came from" the 27th Ward was $62,094,478. That is to say, that if on January 1, 2012 all those 12 TIFs had been dissolved and the property taxes that remained in their accounts had been returned to the wards where they came from, that the 27th Ward would have been owed $62 million.

Imagine a bank account that opened up in January of 2012 which contained $62 million of property taxes -- property taxes that had been collected solely from inside the 27th Ward. What uses might the residents of that ward have for that money?

We discovered that all properties inside the 27th Ward paid a total of $111, 719,643 in property taxes in 2011. Since TIFs claimed $36,800,000 of that sum, TIFs extracted 32.9 percent OF ALL PROPERTY TAXES LEVIED IN THE WARD IN 2011. What this means is that all units of government relying on property taxes for their operation were SHORT CHANGED by the 12 TIFs pulling money from the ward.

The TIF Illumination Project also reported on the projects funded by TIF dollars inside the 27th Ward.

We found that during the approximately same nine year period a total of $192,869,949 was spent on projects inside the 27th Ward.

We classified these projects according to whether they were Commercial Projects owned by private business, Private Nonprofits operated by charities or service organizations and Public Projects operated by the city.

We found that of all the TIF money coming BACK into the 27th Ward, only 42 percent went to Public Projects such as projects attributed to the Board of Education. 46.4 percent of the TIF funds went to Commercial Projects such as:

And 11.3 percent of the TIF funds went to Private Nonprofits such as Heartland Housing ($5 million) and the National Hellenic Museum ($3.5 million).

Incidentally, finding the details on these projects is not easy. Here is a blog post on how we discovered that the $8.2 million listed on two lines of a spreadsheet attributed to something called "1140 N. North branch Development LLC" was really the WaterSaver company. [http://tifreports.com/27th-ward/finding-details-difficult]

There are many questions about the selection of these TIF funded projects. It is very difficult to find the details of these projects in one, easy-to-view location. We had to combine many sources of data to create our spreadsheet.

Everyone who attended the meeting got a poster-sized graphic summarizing all this great information. The piece was designed by graphic designer Carlyn So and was printed up by the Institute for Policy and Civic Engagement at the University of Illinois at Chicago.

Here is the bottom line on the impact of the 12 TIFs inside the 27th Ward.

You can download all this information for free at http://www.tresser.com/store.

After the presentations from the panel the attendees of the TIF Town Meeting were given the opportunity to attend breakout sessions on participatory budgeting, community organizing and investigating TIF projects locally.

Dozens of people attended each session and now a number of projects are being organized across the city to duplicate the TIF Illumination process and the TIF Town Meeting format in other wards.

I'm pretty sure this is just the beginning of a city-wide effort by neighborhood residents to gather clear and in-depth information about how their tax money is being used and abused and for them to have a serious say in the matter.