One fascinating question about the financial crisis is how and why the CEOs of major banks could have tolerated behavior that destroyed their own companies. In part, the same toxic financial incentives operated for them as for their employees, making them indifferent to the fate of their firms, employees, and customers. In some cases, however, destroying their firms was clearly contrary to their self-interest. Why did they let it happen?

Here, we must leave pure economics and ponder the toxic effects of too much wealth, too much power, and the new culture of American investment banking. Let us consider, for example, Jimmy Cayne. For those who might find what follows just slightly difficult to believe, I invite you to Google a phrase along the lines of "Jimmy Cayne helicopter Plaza Hotel bridge golf megalomaniac marijuana."

Jimmy Cayne became CEO of Bear Stearns in 1993, and assumed the additional role of chairman in 2001, remaining in both positions until he was finally forced out as CEO in January 2008, by which point it was too late to save the company. 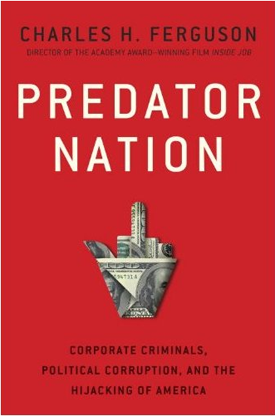 Mr. Cayne, who appears to have been very widely disliked, was not someone you were likely to feel comfortable telling that he was destroying his firm and the world economy. Former employees have told me a variety of stories. He would convene early morning meetings in the office, order a nice hot breakfast from a waiter, and consume it during the meeting, offering nothing to his subordinates, who waited for him to finish. He would invite someone into his office, make a show of taking out two cigars, light one up, and then put the other one in his pocket. He insulted subordinates in public, using extreme profanity. His predecessor as CEO of Bear Stearns, Ace Greenberg, described him as "a dope-smoking megalomaniac."

But that's his good side. As Bear Stearns's profits and stock price soared as a result of the bubble, Mr. Cayne became a billionaire, and he went from being merely obnoxious to being seriously disconnected. He routinely took three- and four-day weekends, as well as extended vacations. For his long weekends, he frequently commuted from Bear Stearns headquarters by helicopter to his New Jersey golf club, where he had permission to land his helicopter on the grounds, and where he kept a house. At Bear Stearns, he reserved an elevator for his sole use. A serious bridge player, he paid two Italian professionals to play with him. He traveled to many bridge tournaments and also spent a great deal of time playing bridge on his computer. Despite being a staunch Republican, he also smoked a lot of marijuana, with bridge partners, fellow hotel guests, and others frequently seeing and smelling it.

When the bubble started to implode in 2007 and Bear Stearns started to come under pressure, Mr. Cayne was frequently AWOL at critical times. Even on weekdays, and even when his company was collapsing in 2007 and 2008, he never carried a phone or pager when playing golf or bridge. He traveled repeatedly to bridge tournaments during this period, sometimes remaining away from the office a week or more. He would not participate in conference calls or meetings if they conflicted with his bridge schedule.

Bear Stearns's troubles started for real in mid-2007, with the collapse of two of its investment funds that had been heavily concentrated in real estate. On Thursday, June 14, 2007, when Bear Stearns publicly reported its first worrisome financial results, Cayne was playing golf in New Jersey; he played the following day as well. One month later, on July 17, 2007, Bear Stearns told investors that the two real estate investment funds were now worthless. The next day, July 18, Mr. Cayne flew to Nashville for a bridge tournament, joined by Bear Stearns's head of fixed-income products, Allen Spector, and stayed there for most of the following ten days, playing bridge. Mr. Cayne was in the office for only eleven days that month. Even when he participated in conference calls, he would sometimes drop off without warning.

This did not seem to disturb the board of directors. Indeed, the impetus for Cayne's removal as CEO seems not to have been his performance, but the increasing publicity, particularly a Wall Street Journal article in November 2007 that described his golf and marijuana habits, and his being unreachable while indulging them. Even after being forced out as CEO in January 2008, Cayne remained chairman of the board. In early March 2008, about a week before his firm collapsed and was sold to JPMorgan Chase, Mr. Cayne closed on his purchase of two adjoining apartments in the Plaza Hotel for $24 million. On March 13, when Bear Stearns entered its final death spiral, he was in Detroit, playing bridge again; he joined the board's conference call late so that he could finish his game first.

On May 10, two months after his firm's collapse, Mr. Cayne attended a party held at the Plaza for new residents. The party included caviar and cognac bars, as well as a buffet that replicated paintings from a Metropolitan Museum exhibit, "The Age of Rembrandt."

Mr. Cayne did suffer, of course. He lost his job; but when Bear Stearns collapsed he was seventy-four years old, near retirement age anyway, and it seems likely that in his head, he had already been retired for quite some time. The value of his Bear Stearns stock declined from about $1 billion at its peak to a mere $65 million when JPMorgan Chase bought it. But Mr. Cayne had thoughtfully taken out lots of cash over the previous years, so his estimated net worth remains about $600 million, probably sufficient to support his golf, bridge, helicopter, and marijuana habits. He still lives at the Plaza (at least when he's in Manhattan -- he has several other homes, including the one next to his golf club).

Certainly extreme, I hear you say, but could such behavior possibly be common, much less representative?

So, yes, it is true that some of the destruction caused by the bubble and crisis cannot be attributed entirely to rational self-interest and fraud. But that doesn't mean that the rest was caused by innocent, well intentioned error. Rather, it was symptomatic of a culture, and a governance system, that was seriously out of control.

During the bubble, many Wall Street executives constructed surreal little universes around themselves. The essential components of these worlds were physical isolation via private environments off -limits to their employees (limousines, elevators, planes, helicopters, restaurants), sycophantic employees and servants both at work and at home, and a compliant, clueless board of directors. Often their worlds also included trophy wives, mistresses, prostitutes, and/or drugs. Leisure activities were divided generationally. Young traders and salesmen focused on nightclubs, strip clubs, parties, gambling, cocaine, and escorts; New York investment bankers certainly spend over $1 billion a year in nightclubs and strip clubs, much of it charged to their firms as reimbursable, and tax-deductible, business entertainment. The older generation of senior executives, most of them married, tend to favor golf, bridge, expensive restaurants, charity events, art auctions, country clubs, and Hamptons estates.

Jimmy Cayne wasn't the only one with a private elevator and a taste for helicopter commuting; in fact he was comparatively reasonable. After complaints, he eventually agreed to reserve the elevator for his private use only between 8 a.m. and 9 a.m. every day. Richard Fuld, Lehman's CEO, had a different system. Whenever Fuld's limousine approached Lehman headquarters, his chauffeur would call in; a specially programmed elevator would descend to the garage, held there by a guard until he arrived. Then the elevator took Fuld straight to the thirty-first floor, with no stops, so he didn't have to see any of his employees. Stan O'Neal at Merrill Lynch had a private elevator too - namely, any elevator that happened to be around when he arrived. A guard would hold the next elevator that appeared, preventing anyone else from entering and, if necessary, ordering others already in the elevator to leave.

Everyone had limousines and drivers, of course, but there were serious toys, too. When Lehman went bankrupt, it owned a helicopter and six corporate jets. Two of the jets were 767s, which normally seat over 150 people when used by airlines, and cost over $150 million when purchased new. In addition, however, Joe Gregory, Lehman's president (the number two position under Fuld, the CEO), had his own personal helicopter, in which he commuted daily from his mansion in the Hamptons. In bad weather, he sometimes used a seaplane.

But what were their financial incentives, how did their boards of directors reward and discipline them? Were others as bad as Bear Stearns and Jimmy Cayne?