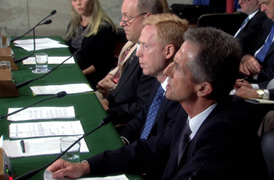 Toxic Hot Seat, a new documentary directed by James Redford and Kirby Walker, takes an in-depth look at chemical flame retardants. It interweaves the multiple narratives of investigative reporters, scientists, lawmakers and community activists as they fight for transparency around a 1975 law. That piece of legislation, California Technical Bulletin 117 (TB-117), was enacted to eradicate fires in the home caused by cigarettes. What ensued were health hazards Americans were unaware of and years of disinformation promoted by those with big money at stake. At the core of the film stands the investigative work of three Chicago Tribune reporters who put the story on the map with their series, "Playing With Fire." As they sift through the facts, the circle expands to connect their findings to the other key players in the account.

One of the top takeaways for the general public is the startling information that there are approximately 84,000 chemicals being used commercially in the country. They include home cleaning agents and flame retardants in furniture. Even more problematic is that the majority hasn't been tested for safety--and are exempt from regulations.

When it was determined that cigarette-induced furniture fires were a primary cause of injuries and deaths from fires in the home, the tobacco industry was pressed to develop a "fire safe cigarette" that could extinguish on its own. However, the decision makers for tobacco asserted that it wasn't their responsibility to prevent these fires. Rather, they shifted culpability to furniture makers. Bolstered by support from the National Association of State Fire Marshalls (their site has a PDF rebuttal to Chicago Tribune allegations), the initiative to alter the equation fell to the furniture industry. They were pegged as the "fuel," as opposed to the cigarette manufacturers who were just the "igniters."

When California put TB-117 into play--mandating fire retardants in furniture--manufacturers adopted the guidelines for all production in order to avoid developing two different product lines.

One of first groups to become aware of a correlation between flame retardants and health was fire fighters. We are introduced to Tony Stefani, a retired fire department captain turned activist. He was diagnosed with a rare form of cancer. With other members of the San Francisco Fire Department getting ill, Stefani began questioning. He learned that when flame retardants burn they turn into toxic chemicals; fires in essence become "toxic soups." Statistics now show that in a demographic of San Francisco women firefighters in the 40 to 50 year old demographic, the rate of breast cancer is six times the national average.

Dr. Arlene Blum, recognized for getting flame retardants with cancer causing chemicals out of children's sleepwear, is a primary voice elucidating the science behind the chemistry. Several of the flame retardants currently in use are from a group of chemicals that include the banned substances of PCBs and DDT. They enter the body, bioaccumulate, and create havoc within the human system.

PBDEs, which often come out of the flame retardants in cushion foam and then attach to dust particles, are present in over 90 percent of American homes. Women with elevated amounts take twice as long to become pregnant. Children with higher levels at birth have a four to six point deficit in their IQs. PBDEs have been linked to impaired cognitive and behavioral problems, as well as increased rates of birth defects, and are found in amniotic fluid and breast milk. Children have three times more of these chemicals in their bodies than adults.

The American Chemistry Council declined requests from Redford and Walker to be interviewed for the film. However, they have posted a press release on their site charging, "New Docudrama Misleads the Public on Flame Retardants." Another angle that was underscored by Chicago Tribune journalists Sam Roe and Patricia Callahan was the distortion by the chemical industry of a study conducted by fire protection engineer Vytenis Babrawskas. Babrawskas told the Tribune writers in their article, "[the] Industry has used this study in ways that are improper and untruthful."

It should be noted that the top three companies generating the bulk of flame retardants on the market make over 3 billions pounds of these chemicals annually. This gives rise to "a market worth over $5 billion."

The final piece of the puzzle was the legislators who began introducing bills in 2004-2005 to push back against the big money interests. California State Senator Mark Leno and Maine representative Hannah Pingree presented numerous bills to ban flame retardants. Their efforts were met with a $6 million press campaign led by the chemical industry. Maine saw more success than California. Pingree's actions resulted in a statewide ban against flame retardants. Repeatedly, the bills put forth by Leno were defeated. Then, in May 2012, the Chicago Tribune published the first installment of their exposé. In June of 2012, California Governor Jerry Brown released a statement in which he directed state agencies to revise the flammability standards. Just this month, Brown announced new standards to reduce toxic chemicals in furniture for his state.

Pingree delivers one of the strongest lines in the movie when she appears in front of Sen. Barbara Boxer and the Senate Committee on Environment and Public Works at a hearing on July 24, 2012. The witnesses included Stefani, as well as a lawyer and an "advocacy" representative for the chemical industries. Stefani told Boxer and the committee:

"I don't trust these companies to tell the truth about their chemicals, and I don't think the American public or you as Senators should either."

The film has a link on their website to connect with Safer Chemicals, Healthy Families, to mobilize the public through additional information and action campaigns.

This article originally appeared on the blog Ken's Green Furniture