An abandoned, four-story building towers above a windswept field, blending in with the landscape like an old tree.

But not everything about the image ― a photo taken by artist Julian Charrière ― is quotidian. Splotches of light festoon the serene setting, as if its been doused with spilled bleach. And, in fact, the chemical look of the photo is the result of toxic exposure: Charrière covered the film in radioactive soil, found at the site where the picture was taken.

Charrière got the idea for the photo series after reading a science-fiction collection by J.G. Ballard, The Terminal Beach. The stories are set on the Marshall Islands, in a post-atomic future.

“The island acts as metaphor for a lost paradise, a landscape forever changed through human intervention,” Charrière said in an email to The Huffington Post. “I have always been strangely attracted to territories like that. There is something both terrifying and fascinating about a place that has been altered by humans in such a way that goes beyond any perceived timespan.”

Because of his interest in how humans and nature interact in destructive ways, Charrière learned of a top-secret nuclear testing site in Kazakhstan called Semipalatinsk, also known as “The Polygon,” and decided to travel there for the project.

The resulting photos are eerie black-and-white images that capture a desolate landscape which appears to be unmoored from space or time ― it could’ve existed in the distant past or the far-off future. “The work depicts an atemporal landscape, the structures could be from an ancient civilization or from a science fiction movie set,” Charrière explained.

“I really wanted to anchor the work in a tradition of documentary photography, but I also wanted to give the series a Tarkovskian aura,” he continued, alluding to the Soviet filmmaker whose movies confronted the ethereal, almost spiritual nature of destruction.

But, what’s more interesting about Charrière’s photos is that, although they have a strange, atmospheric look to them, they’re the result of literal destruction. The missing patches splotching the photos show how potent ― and ruinous ― radioactive chemicals really are. 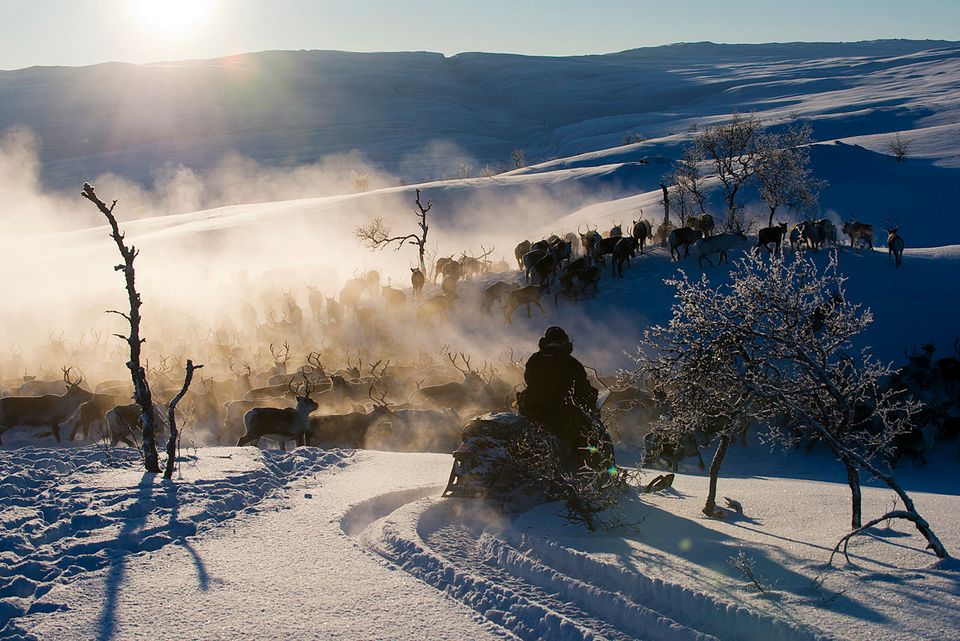 1 / 6
A Sami riding his snowmobile through the mountains as the herd is driven toward the corral.
Aina Bye