A new test shows there's definitely something in the water at Google. And it's toxins, to be exact.

Levels of a toxic solvent known as trichloroethylene (TCE) were detected in two offices at Google's Mountain View headquarters. The fumes are suspected to be the result of toxic solvent dumped by previous tenants of the building, according to a CBS report. The toxins contaminated the groundwater. A spokesman for the local EPA contacted HuffPost to clarify that the area groundwater is not used as drinking water by either Google employees or anyone in the vicinity.

Before Google moved into the buildings, various chip makers, including Fairchild SemiConductor and Intel, worked out of the office spaces, CBS reports. The companies allegedly dumped toxic solvents into the ground.

Though the office TCE are tested regularly, this was the first year TCE vapors failed to meet the EPA's standards. Some blame Google's building modifications, which created pathways through floors and spread the vapors.

TCE can cause health problems such as dizziness and headaches. It has also been linked to liver cancer. Fortunately, Google employees are not at risk for these illnesses.

"The potential health concern is long-term exposure to TCE," EPA Project Manager Alana Lee told the Mountain View Voice. "Any exposure would have been for a limited time, a short term. There hasn't been any exposure for a long period of time."

Google is addressing the issue through ventilation systems and carbon filters, according to a spokesperson. The company is open to ideas for having the ground water cleaned up.

"We'd welcome and expect all the original parties involved to continue to innovate in finding new and improved science for removing this and all chemicals from our groundwater throughout the country," a Google spokesperson told the Mountain View Voice.

Clarification: Language has been amended to more accurately characterize the toxins discovered at the location and the post has been updated with clarification by the EPA about the local drinking water. 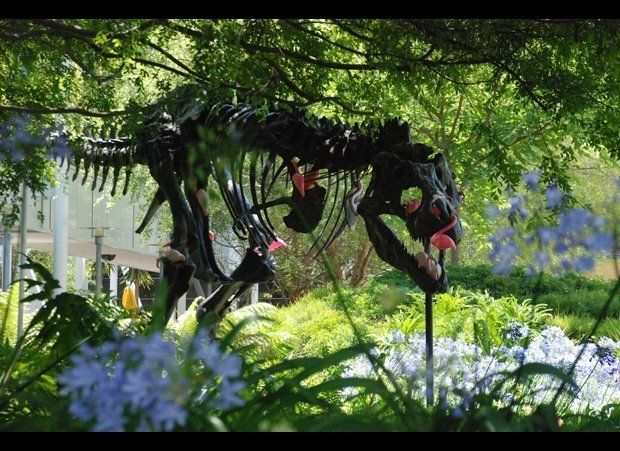 1 / 7
Stan The T-Rex
Employees are encouraged to add their personal touch to the campus.