Tiny amounts of lead, chemical flame retardants and organophosphate pesticides, among other toxins, course through the blood of nearly every American. But just how much worry is a little poison worth?

A lot, especially when considering the cumulative effects of this chemical cocktail on children, warns a video unveiled Thursday during an environmental health conference in Ottawa, Canada. The seven-minute project, "Little Things Matter," draws on emerging scientific evidence that even mild exposures to common contaminants can derail normal brain development -- lowering IQs and raising risks of behavioral conditions such as attention deficit hyperactivity disorder, or ADHD.

"The chemical industry argues that the effect of toxins on children is subtle and of little consequence," co-producer Bruce Lanphear, an environmental health expert at Simon Fraser University in British Columbia, states in the video. "But that is misleading."

Drop a few tablespoons of sugar into an Olympic-size swimming pool, and you have the sort of minuscule concentration of a toxin that researchers are finding can wreak havoc on the brain. The drug Ritalin is designed to temper symptoms of ADHD at about the same level in the blood.

Children are most vulnerable to neurotoxins while in the womb and during the first years of life. "Things are happening very fast in terms of brain development, especially in the third trimester of gestation," David Bellinger, an expert in children's environmental health at Harvard University, told The Huffington Post. "Neurons are being born and migrating to where they are supposed to end up in the brain, differentiating into different types of cells, establishing connections with other neurons.

"Those processes are very sensitive. Everything has to happen in right order at the right time," added Bellinger, whose research has associated lead, methylmercury and organophosphate pesticides to nationwide drops in IQ of 23 million, 17 million and 300,000, respectively.

Lanphear focused on six brain toxins in the new video: lead, mercury, organophosphate pesticides, polychlorinated biphenyls (PCBs), bisphenol A (BPA) and polybrominated dipenyl ethers (PBDEs), a chemical flame retardant that his research team this year linked to IQ deficits and hyperactivity. This list of chemical brain-drainers, according to a study published in February, may be just the tip of the iceberg.

The chemical industry is critical of the new video and defends the safety of chemical products.

"Exposure to trace levels of a chemical does not signal impending harm to health," said Kathyrn St. John, a spokeswoman for the American Chemistry Council. "This video and other communications like it hope to muddy the waters about the safety of various chemistries."

Lanphear conceded one point. "It's true," he said. "Not all chemicals are bad."

It's also true that today, compared with decades ago, fewer children are exposed to high levels of some toxins, such as lead -- concentrations that in previous generations may have been known to produce obvious, devastating effects such as seizures or death. But even if it goes unnoticed, a little lead exposure today may leave a child a little slower to learn, a little shorter of attention and a little less successful on tests and at work. Economists estimate that bit of lead may mean a loss of $90,000 in lifetime earnings. 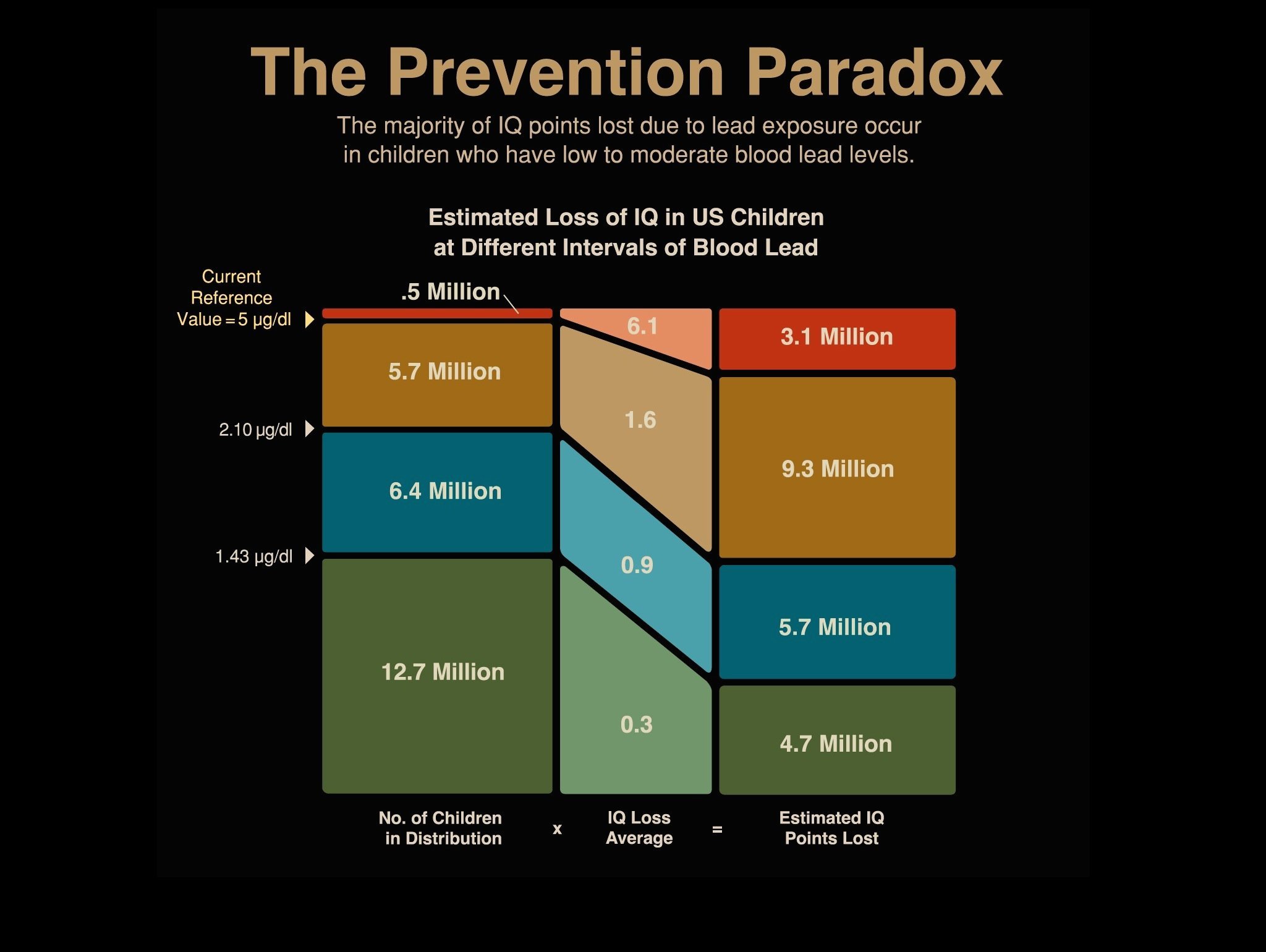 Most IQ losses due to lead exposure fall outside of the federally established threshold. (Bruce Lanphear)

The U.S. Centers for Disease Control and Prevention, among other national and international health agencies, has declared that there is no safe level of lead in a child's blood. However, due to limited resources, the CDC focuses on just 2.5 percent of children with the highest blood lead levels. Lead exposures among these 500,000 children, Lanphear explained to HuffPost, are estimated to have trimmed IQs by an average of more than 5 points.

Still, Lanphear emphasized that more needs to be done. With the heavy metal, and possibly with other toxins, there is actually a proportionally greater decrement in IQ at the lowest levels of exposure. In other words, the first 100 parts per billion of lead in the blood cuts IQ by an estimated 6 points. When blood lead concentrations rise to 200 and 300 parts per billion, respectively, estimates suggest another 2 points and 1 point of IQ are lost.

As a consequence of not addressing the lower-level exposures, added Lanphear, "we're failing to protect over 80 percent of IQ points lost from lead exposure."

In the new video, Lanphear illustrates another striking way widespread exposures to a toxin like lead can affect the next generation. A 5-point reduction in average IQ results in fewer than half as many children considered "intellectually gifted," 50 percent more "intellectually impaired," and billions of dollars of productivity lost.

A 5-point drop in average IQ among U.S. children would result in an additional 3.4 million children who are considered intellectually disabled or mentally retarded. (Bruce Lanphear)

For every $1 spent to protect kids from lead, according to study published in 2009, society saves $17 to $220, thanks to reduced costs of health care, special education, crime and lost lifetime earnings for those with IQ losses or disorders such as autism and ADHD.

And that's just one toxin. Impacts from multiple chemicals may simply add up, amplify one another's effects, or -- although less likely -- cancel each other out, noted Harvard's Bellinger.

"The evidence is really mounting that industrial chemicals have some contribution to neurodevelopment problems," said Tracey Woodruff, director of the University of California, San Francisco Program on Reproductive Health and the Environment. "And we're seeing more kids with these problems."

Experts agree that changes in diagnosis and surveillance contribute, but are unlikely to fully explain the large rise in such disorders. Bellinger suggested that the "first place to look" may be the chemicals that have increased in everyday life in recent decades, such as flame retardants and BPA.

Experts also agree on one big problem: We're not really looking. The U.S. Environmental Protection Agency, for example, has only required toxicity testing for around 200 of the more than 80,000 chemicals permitted for use in the U.S.

"By allowing children to be exposed to toxins or chemicals of unknown toxicity, we are unwittingly using our children in a massive experiment," says Lanphear in the video.

While suggesting that the "ultimate solution" is to "revise how we regulate chemicals," Lanphear offered a few suggestions for consumers navigating toxins: Eat fresh or frozen foods, choose fish low in mercury, avoid the use of pesticides in and around the home and check for lead in older homes.

He also recommended writing government representatives and urging them to support regulation that reverses the burden of proof to require companies prove a chemical isn't toxic before it enters the market. In the U.S., an overhaul of the Toxic Substances Control Act of 1976 remains hotly debated.

"This emerging evidence that there is no threshold for some of the most well-established toxins strongly supports the urgent need to revise" the toxic substances act, Lanphear told HuffPost.

And while the time is ripe for that federal move, Lanphear added that it is "exactly the wrong time to terminate the National Children's Study." The future of the U.S. study, long-planned to follow children from birth to adulthood, tracking factors such as exposure to toxic chemicals, now looks uncertain.

"I firmly believe that until mothers and the public become more familiar with this science not much will happen," said Lanphear. "The hope is that videos like this will help people understand this emerging pattern of toxicity."

The reaction from Woodruff's son, Xavier Woodruff-Madeira, 16, to the video is just the kind Lanphear hopes to spark: "I didn't know that tiny little amounts of chemicals can add up to make a big difference in kid's attention -- and affect all those kids."