On Saturday, we braved yet another New York City snowstorm to attend Hasbro’s 2014 Toy Fair press event. "Why should I care about toys?” you just asked (if you are a normal adult, unlike me). Well, the Toy Fair often provides fans with their first look at characters from the biggest movies of the upcoming year. In this case, those movies are Marvel’s “Guardians of the Galaxy” and “Captain America: The Winter Soldier,” along with “Transformers: Age of Extension” and everything that’s going on in the “Star Wars” universe.

Below are a few photos from the event that capture what to expect this year. The 12-inch "Guardians of the Galaxy" action figures of Star-Lord and Rocket Raccoon both speak. The voice of Star-Lord is Chris Pratt, but Rocket’s voice is sadly not Bradley Cooper. Though, Rocket is animated and, when activated, comes to life and shoots things. (Also included is a photo of a new 29-inch X-Wing Fighter that I’ve already been told I’m not allowed to have because it’s almost as big as our apartment.) 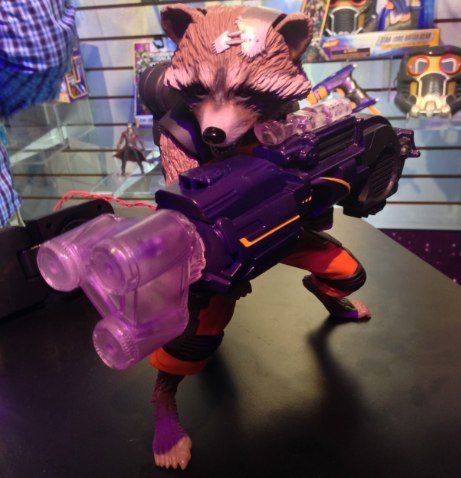 1 / 22
Blastin Rocket Raccoon
Rocket Raccoon from "Guardians of the Galaxy" speaks and animates as he fires his weapon.
Mike Ryan/Hasbro