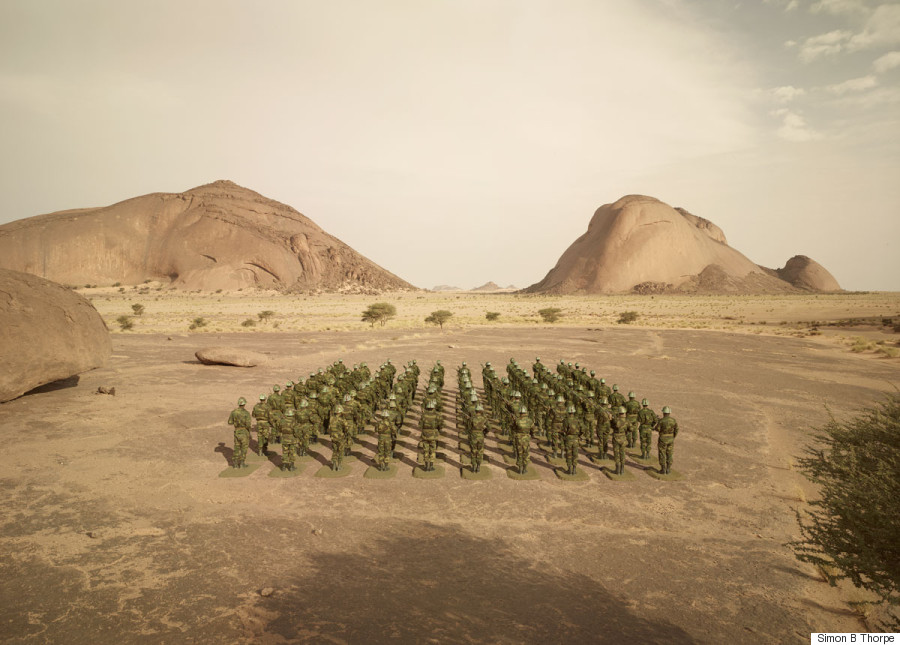 Rows of rigidly posed, plastic-looking green figures stand at attention. Guns in tow, they’re dwarfed by the vast expanse of desert surrounding them. But these are no toy soldiers. The subjects of Simon B. Thorpe’s photographs are real men, modeled to look like the symbols of so many childhood playtimes.

Thorpe became interested in calling attention to the ongoing conflict in Western Sahara, a disputed territory which Thorpe says has received inadequate media coverage, after embarking on a project about land mine victims. In an email to The Huffington Post, he said staging actual soldiers as mere toys “fit perfectly with the situation on the ground,” and allowed “people in the West to have an emotional, physical and nostalgic response to a completely foreign reality, triggered by a familiar symbol of their own childhood and culture.”

Contrasting Thorpe’s bird's-eye imagery of make-believe fighters are zoomed-in, head-on portraits of Western Saharan soldiers, most wearing anguished expressions, with their eyes cast downward. Though their features are clear and humanizing, their shared solemnity lends to the project’s overall tone of our unfortunate tendency to view soldiers as anonymous harbingers of pain rather than emotional individuals.

Thorpe arranged these portraits, as well as the staged images of the soldiers posing as toys, through a collaboration with a commander of the Liberated Western Sahara region, with whom communication was difficult due to the area’s isolation and the language barrier between the two of them. Though arduous, working directly with Western Saharan soldiers was essential to the themes and mood of the project -- calling attention to “a powerless state of being.”