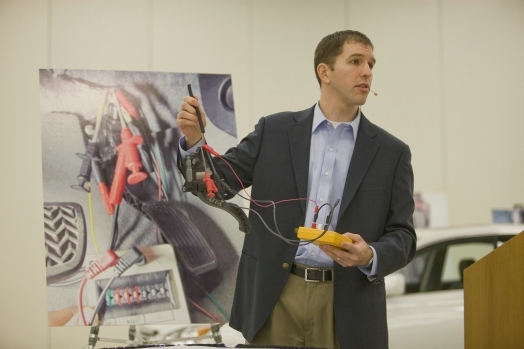 Toyota's response to an ABC News story that aired on February 22, 2010 about the car company's sudden acceleration problems reminds me of GM's vehement rebuttal to an NBC Dateline broadcast that showed one of its pickup trucks catching on fire.

In the current situation, David Gilbert, an engineering professor from Southern Illinois University, who conducted the tests on a Toyota Avalon, concluded that the sudden acceleration problem could stem from the vehicle's electronics and not the gas pedals or floor mats. This was a compelling television new story.

Toyota responded in a press release,

Professor's Gilbert's demonstration... is highly unlikely to occur naturally and can only be contrived in a laboratory. There is no evidence to suggest that this highly unlikely scenario has ever occurred in the real world.

While it remains to be seen if Gilbert's tests are truly applicable to this problem, the company's response comes on the heels of a succession of adamant statements that it's been forced to retract since the unintended acceleration issue first came to light last Fall. We're all familiar with how this has rolled out. First denial and a blaming of the driver -- "driver error." Then a solution is proffered -- floor mats. Then the company says it's actually the accelerator pedal sticking. Then as Congress and the National Highway Traffic and Safety Administration (NHTSA) cranked up the heat, speculation began to center on whether the cars' electronics (its Engine Throttle Control Systems (ETCS), the chips that control the throttle and thus determine acceleration) could be the problem. 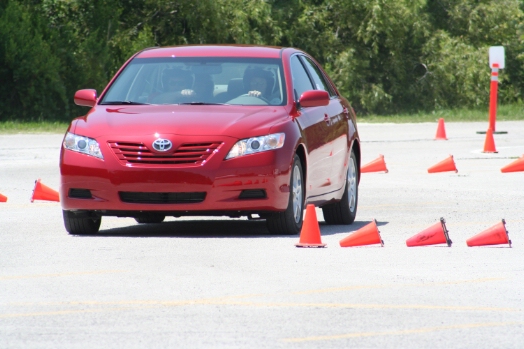 This is a potentially far more expensive fix complicated by the fact that the operations of Toyota's electronic systems cannot be verified independently because they run on proprietary software. There's only one computer in the United States that can decipher the data and a Toyota engineer has to be there at all times to "interpret" the meaning of this data stream. This pattern of denial followed by half measures and reassurances that all is well is eerily familiar. Toyota appears to be following the GM playbook on damage control.

I remember being in the room in February of 1993 when a ramrod straight GM lawyer, Harry Pearce, who'd acquired an aura of judicial temperament as an Air Force military judge and served a stint as a U. S. Magistrate in no nonsense Bismark, North Dakota before coming to GM, decisively attacked the NBC story. His time as the police commissioner in Bismark might have given him the confidence to hire some private detectives to investigate the NBC test. Pearce hammered home their findings during a global satellite uplink from GM's Detroit headquarters.

His investigators determined that the NBC producers had used small rockets to ignite leaking gasoline during the taping of a portion of its report on the company's very profitable pickups. This stunning revelation would result in the network paying the auto giant a $2 million settlement, issuing a retraction, and prompted the "resignation" of the president of NBC News. I was impressed with Pearce and persuaded he'd made his case. I wasn't alone. The assembled audience of employees cheered and applauded and the media largely went away taken with Pearce's bravura performance. His skills at defending the company, slaying the media dragon and earning employee loyalty were noticed and he was elevated to Vice Chairman. I didn't learn until later that what he'd actually proven was that diversion can be an effective counter-punch.

No one can condone the use of undisclosed rockets to jazz up the NBC story, or any falsification or faulty testing or reporting, but in GM's case the fact remained that leaking fuel from the gas tanks appeared to be igniting as a result of collisions and the subsequent fires injured and killed people.

US Department of Transportation records revealed that over 1800 people died between 1973 and 2000 in "fatal fire crashes" in GM's C/K (two and four-wheel drive respectively) pickups. More than double the number of deaths from the Ford Pinto fires. Unfortunately, the story's "trick" shots sabotaged its message and allowed Pearce to discredit the whole piece.

After the Dateline fiasco, the network and most other news outlets lost interest in the burning truck issue but people were still dying and GM's cost for settling lawsuits soared to a reported $495 million for pickup fire cases. The company continued to say there weren't any problems and resisted a recall of nine million of its pickups. The Center for Auto Safety (CAS) charged that company officials had knowingly made the decision to ignore the advice of their engineers and originally built the C/K pickups with a dangerous fuel tank placement because it would be easier to put a bigger tank there than to do the right thing. CAS reported that GM continued to resist efforts to make safety improvements after it received reports of fires and its customers' deaths because the $23 cost of the proposed changes was more than a consultant said the public's safety was worth. Sound familiar?

That said, Harry Pearce did support an education program to improve the Test Incident Report (TIR) process within GM one month after delivering his knock out blow to NBC. He wanted to help bring these safety issues forward from engineering and testing before vehicles reached production and turned into product liability and public relations nightmares. Pearce, and others, saw the TIR's as an "early warning system." That warning system had broken down or been rendered ineffective in several cases in addition to the C/K pickups.

Internal GM documents reveal that the C/K fires were not the only safety issue plaguing the automaker. Engine compartment fires in its trendy sports car, the Pontiac Fiero, had cost over $188 million for Safety Campaigns, lawsuit resolution, engineering and miscellaneous expenses. Faulty ball joints in 1.8 million of the fire prone C/K pickups added another $48 million to the cost column. Loss of power steering when its mid-sized vehicles were cold rang up a $248 million bill. Hoods that became guillotines in a frontal crash drained the corporate coffers of another $6.8 million. Bad parking brakes, doors that fell off, other engine fires and even cases of unintended acceleration drove the safety issue bill up another $60 plus million. These were just some of the safety issues active at the time of the C/K brouhaha. This litany of troubles cost the corporation about $1 billion. What was disturbing was that all of these problems had been discovered during testing but the vehicles were allowed to go into production before fixes were found or implemented.

These were not simple oversights. The Fiero generated seventeen reports of engine fires during testing that stretched from September 1982 to February of 1988. All of these were written up as, "plant security reports," in order not to cause undue alarm and hold up production. One report listed a fire as a "wastebasket" fire in the office.

The list of injuries caused by ignoring the Fiero's fires and the other vehicles' problems was staggering: death, closed head injury, paralysis, brain injury, quadriplegia, leg amputation, multiple burns and on and on.

Fatally flawed vehicles were hitting the road and sitting like ticking time bombs in consumers' garages.

Pearce recognized that killing your buyers didn't do much for "customer satisfaction" and it cost the company a boatload of money in lost sales, litigation, settlements, damage awards, recalls, and repairs.

The market share figures told the story. GM sales had begun to plummet during this time, dropping it from 48.5% of passenger car sales in 1980 to around 35% in 1992 when the C/K pickup truck controversy was making headlines. Quality was seen as vital to stemming the drop and much lip service was paid to "closing the gap" with the Japanese. But American buyers grew weary of waiting and defected to the reliable Hondas and Toyotas.

Unfortunately for GM, and the other domestic manufacturers headquartered in or near Detroit, they couldn't stem the slide. Today, their combined sales are about equal to what GM alone sold in 1992. GM's stated goal of once again attaining 20% is seen as a long shot from their current 16% slice.

Harry Pearce staved off the attack on GM with his public relations sleight of hand that demolished the opponents. However, the company didn't use its reprieve to fix its problems.

If it turns out that Toyota is just embracing the lessons of the old GM and its troubles keep simmering long enough, there might be a glimmer of hope for the former big three that are now producing vehicles that actually do rival the competition.