This past week, as the sun came out after several rain-plagued days, the areas around my Southern California neighborhood were filled again with the usual suspects. They were the runners from all over the city (I'm near one of those "domestic canyons") including walkers, joggers and their pets, all planning to revel in the welcome early-morning warmth - and poop on my lawn - but soon we were all knocked back into the realities of daily life.

Knocked back by, of all things, Honda and Toyota.

Why, we So Cal-types love Honda and Toyota! It's in the handbook and the contract you sign when you head west across the 405 Freeway! How could this happen - yet again?

New vehicle sales in California, both import and domestic, are not booming yet, but have been on a solidly upward trend in the midst of this "recovery."

That dancing should have been found, especially, at the national headquarters of both Toyota and American Honda, barely a quarter-mile away from each other. Easy walking distance. 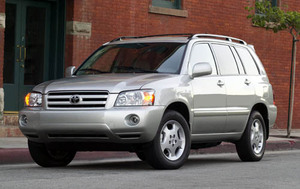 2005's Toyota Highlander; many will visit their birth dealerships over the next month or so.

As you read this, it may be the weekend: so for those of you near the 110 and 405 Freeways, start the eggs, play with the kids, take Fido and Fluffy for a stroll... and warm-up the engines.

Specifically, the engine in the Honda and/or Toyota minivan/crossover you've been driving faithfully since you bought it between 2004 and 2007 (depending on the model). Why? Because you're going back to your dealer.

You see, there's another, uh, recall.

Pack the little ones, too, because you're probably going to stop at some fast food place. Heck, the dealer might even have fast food in his store! You know how eager they are to please these days!

But, yes, you've guessed it. Some of the people who engineer our massively complicated cars and trucks seem to have blown it... again.

Both Toyota and Honda consider their respective situations serious enough that they are instituting "voluntary recalls," which are basically what a smart car company does right before the National Highway Traffic Safety Administration decides to do it for you.

And here are the recall totals (announced so far): about 1.5 million worldwide for Toyota (728,544 in the US). Honda? They're saying about a half-million total Odyssey minivans and Acrua RL sedans will get caught-up in the excitement.

There are a bunch of other vehicles from these two which might be involved as well. Here's the Miami Herald list as of October 21 of the affected cars sold by Toyota and Honda in the U.S. (the number of cars on either list might shrink or grow).

What might happen this time out for two of the world's top auto companies? And their customers? Your brakes could fail.

From the Department of Irony: last recall time, on the Toyotas, the cars would not stop accelerating. Now, the accelerator works fine, but the braking could be seriously, even dangerously, degraded.

So why all the hubbub for something which seems (and is, in reality) a list of very simple symptoms, fast diagnosis and fix? Any 17-year-old high school auto shop student should have been able to spot this one coming down the road (even smell it coming -- no joking).

Brian Lyons, Toyota's Director of Safety and Quality Communications, told me that both the Toyota and Honda problem, as similar as they seem, could be related to the same parts coming from the same supplier. This weekend is only the most recent of 16 recalls for Toyota garnering worldwide attention.

And while nothing has been officially announced, don't be surprised if a company called "Advics" in Aichi Prefecture (state), Japan, becomes water cooler talk over the next few weeks (then just magically goes away); they might supply both Honda and Toyota with the same offending parts.

Here's what they think causes the trouble for both companies (based on, Lyons told us, the research they've done so far, and from Toyota's point of view): Brake fluid is bubbling and leaking out of the brake system's master cylinder, degrading the fluid, making the brake pedal feel spongy (you know that feeling) and possibly robbing stopping power from the system as a whole.

Has Toyota gotten a little "once bitten, twice shy" when it comes to their own in-house investigations? That fluid is the single key ingredient vital to stopping the car; it needs to be as free as possible from any air and/or other contamination. Brake fluid (aka hydraulic fluid) is created with special properties ("Straight to the laboratory, Igor!"), including the ability to not absorb moisture. When water gets in, braking ability gets out.

Around five years ago, the first reports of "spongy brake pedals" started trickling into Japan's Toyota dealerships. Then more and more reports, though there's been a slowing in the most-recent time period. 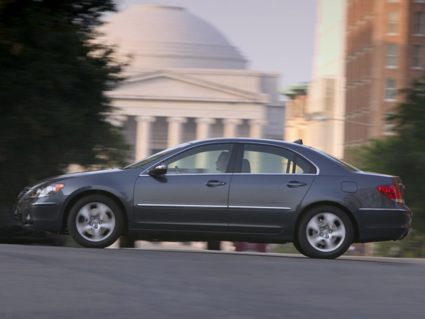 This 2006 Acura RL is feeling the Call of the Congress... well, maybe not yet

Toyota says that's probably because dealers and/or customers have been making their own "fix" and/or owners are pouring in upgraded, thicker brake fluid on their own, which can work for a time. It's like using thicker engine oil to cut back on leaks out of an engine's top end... but kids, please don't try this at home.

Toyota, it must be said, stepped right up to the plate (once, that is, they felt they actually had something to say).

Toyota was using different brake system parts and fluids from one supplier. The problem was showing up in one of the master cylinders on the cars, using a specific, single type of brake fluid (of the two Toyota was using in these cars).

This time out, Toyota found the fluid in one kind of cylinder contained polymers (extremely sophisticated lubricants) of a certain type and quality.

After a time following purchase, this brake fluid's level was dropping, the brake warning light came on, some people visited their dealers and a fix was developed. And all was well with the world and master cylinders. Ignore the light (admit it -- you've done that!), and the fluid leaked more and dropped to a point where the pedal gets spongy and the potential for a failing hydraulic system is possible.

This all gets very complicated as there are questions about all the cars affected by the recall. Do they merely lose their anti-lock brake systems, whereupon everything reverts back to simple, safely-working hydraulics? And what about the high-techy brake-by-wire systems?

All this will come to light as the story unfolds.

One thing in Toyota's favor: they got right out in front of this one, taking the lead in "coverage" of "their problem." Toyota's Safety Communication Manager Lyons told me right off the bat during our lengthy conversation that, "We never stop investigations in our systems," and even if it's ultimately found the problem lies with the brake system or fluid manufacturer, these types of things are "not supplier based, but ours."

And there will be stories. Remember when Toyota felt it necessary to trot out 54-year-old Akio Toyoda, grandson to company founder Kiichiro? Even his kind of money and power could not fully protect him from the wrath of a vengeful U.S. Congress just wanting to talk!

Again, the fix takes two hours, is absolutely free and involves new fluid, one small part and odds and ends.

All dealers ask is you make a reservation with them; you and the dealer should determine absolutely that your car is among the damned... uh, I mean, recalled.

Registered owners will begin getting those dreaded recall notices within the next two weeks. Don't wait; be aggressive. Call today or go to www.NHTSA.gov, armed with your vehicle's VIN. If you don't know what that is, Google "Finding VIN" and you'll get more info than you need (or want). Then follow the instructions.

More than a hint of arrogance was, unfortunately, whiffing through the campfire the past two days, familiar to any journalist who has spent 45 minutes, much less 45 years, covering the worldwide auto industry.

Some reports today (Saturday) said PR reps from both Toyota and Honda essentially blamed the entire problem on the car-owners: (from Chris Woodyard, USA Today): "...this recall was unusual in that both automakers said the problem wouldn't occur if owners had simply followed automakers' recommendations to use only their branded brake fluid."

So now they're telling us where to shop, too?

I don't care if it might even be true. It's a stupid thing to say and way below the standards to which both these companies have adhered that have allowed them to lead the way.

Saturn used to throw BBQs at their recalls. Whatever happened to those days? Oh, yeah... there's no more Saturn.