NEW YORK -- It’s a frigid Thanksgiving Day in Manhattan’s Times Square. Each week, the tourist mecca attracts millions eager to take in the flashing lights. But today’s not about taking selfies in front of billboards. It’s about a shopping frenzy.

Workers mill about outside the entrance of the Toys R Us flagship store. The 110,000-square-foot space is being prepped for its 5 p.m. opening. A line snakes away from the front door, hugging the wall around the block. Here, corralled behind Toys R Us-branded barricades, shoppers wait to be part of the first wave. Most of them are wearing red and white Santa hats, given to them by Toys R Us employees to add more holiday flair.

Elvin Alvarado, a 21-year-old New Yorker who works at a wine shop, struggles to stay warm in the 37-degree chill. His hoodie just doesn’t cut it. But he’s still cheerful, fulfilling what’s become an annual tradition for him. Alvarado has braved the stampede at Toys R Us for the past five years, all in the name of saving money. It’s just worth it, he says.

“Every little bit counts,” says Alvarado, who plans to spend up to $500 on gifts for his nieces and nephews. “Saving a dollar or two goes a long way.” 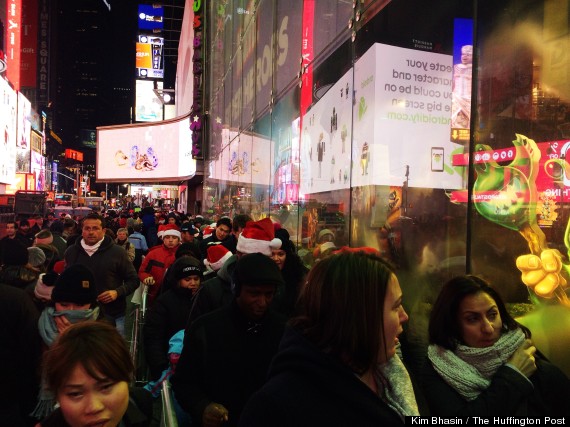 Shoppers line up outside the Toys R Us flagship store in Times Square.

The clock strikes five, and the doors open to cheers from the crowd. The shoppers shuffle forward and into a media funnel, where cameras from local news stations record the mass of people prepared to unleash themselves on the array of toys. Quickly, the store fills up. Upwards of 2,000 customers will end up scampering through the store for the Thanksgiving launch, Toys R Us spokeswoman Linda Connors told The Huffington Post. "This is just the kickoff for us, however, as we will offer great deals every day now through Christmas," she said.

“The line goes around the corner. It’ll take about 20 minutes to get everybody in,” explains a event staff worker at the door, handing out candy canes and repeating the refrain to each inquisitive pedestrian. “Are you closed?” asks one little girl. “No,” the worker responds pleasantly. “We’re open, we just have this line so no one gets hurt.”

Inside, right up front, children and their parents ride a Ferris wheel, a backwards R emblazoned on the side for all to see. Upstairs, kids gawk at the animatronic T-Rex from Jurassic Park roaring at them. RC helicopters and planes hover above, flown by the many demonstrators scattered about the sales floor. People pose with a giant statue of a minion from "Despicable Me." A tall Lego Statue of Liberty looms over its section, watching over the many boxes of building blocks beneath it. Shoppers congregate under signs of brand names, snagging the toys they want: Transformers, Teenage Mutant Ninja Turtles, Skylanders. The Toys R Us feels as much a theme park as a store. 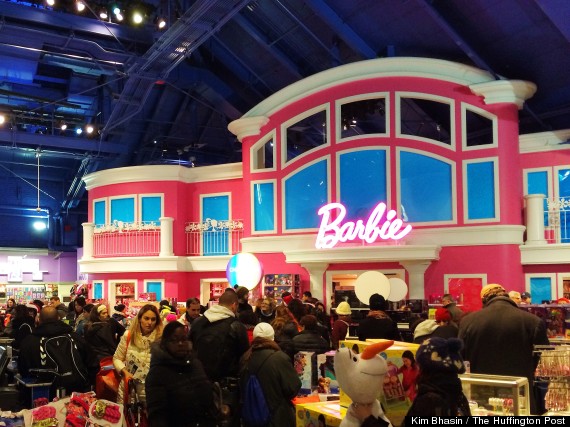 Shoppers browse the toys at Toys R Us on Thanksgiving.

The assault has begun on the "Frozen" merchandise. Toys from Disney’s mega movie franchise are the hottest of the year among girls, dethroning longtime favorite Barbie, according to a survey from the National Retail Federation. In fact, the "Frozen" goodies are situated near the life-size Barbie dollhouse and alongside Barbie toys.

Customers race to snag Anna and Elsa jewelry sets, Anna and Elsa sparkle slippers, Olaf tea sets, Kristoff figurines and all kinds of "Frozen" dolls. A man struggles to reach an Anna’s Frozen Adventure set atop the display and almost knocks one off, but saves it before it can come crashing down to the floor. Then, a bunch of Elsa and Anna dolls go tumbling as a store worker scurries to replace items snatched away by the amped-up customers. She mutters something under her breath and picks up the fallen items.

She, and the others working inside the store, still have quite the grind ahead of them. It's been an hour since the flagship, and other Toys R Us stores across the country, have opened -- and they'll be open for another 29 straight hours. This is just the beginning.