If you have some free time and want to feel like doing a swan dive off a skyscraper later -- go to Toys 'R' Us.

I prance into the gargantuan store alongside a young woman carrying an adorably plump little towhead positively bursting with excitement. "Hooray!" he says to me. "Hooray!" I respond and we both smile, blissfully unaware that this doorway marks the threshold to a maze of Hellfire.

I'm immediately accosted by noise. Several talking toys are going off unprompted. Speakers blare children's music that sounds like Mickey Mouse Club on meth. Somewhere a child screams bloody murder. Between the sounds and sights -- every inch of my peripheral vision is occupied by blindingly bright plastic -- I kinda wanna rip my eyeballs out of their sockets and stuff them in my ears. When my brain finally adjusts to the extreme toy store climate I find myself in the baby aisle attempting to self-soothe by petting a giant giraffe.

I pass by the girl's aisle which appears to have vomited pink and purple, through the black and blue firearms arsenal that is the boys aisle and on to kiddie cars. I pick out the least offensive one and ask a gaunt-faced employee for a hand. I have to explain three times which I want even though he is a native English speaker. I'm pointing and yelling before he catches on. Maybe he's on drugs? I sure as shit would be. He journeys it in the opposite direction from the registers. I try to give him a break -- he deserves an award for having not killed himself (or for that matter countless children) by now.

The song grows seemingly louder, yet another kid bursts into tears, somewhere a toy has lost its marbles, "Be my friend! Be my friend! Be my friend! Be my friend!" I pass a display of expiring Christmas chocolates and inexplicably rip open a bag of Hershey's Kisses then stuff them into my mouth three at a time until they're gone. I shove it behind the other candy. I don't try to salvage the wrapper for checkout, I don't even try to find a trashcan to destroy the evidence. I just leave it there like some sort of ferrel child. I have no idea what got into me, but at this point it's pretty clear -- I've gotta get outta here.

Meltdown number four of the hour is taking place at the register and this time I recognize the assailant. The sweet cherubic boy who walked in has transformed into a pink-faced puddle of tears. He wants two bikes. TWO BIIIIIKKKKEEESSSSS. Who the fuck do you think you are, kid? The president? Your mom is buying you a bike. Say thank you and then shut the fuck up. His searching eyes seek pity in mine and I stare back, merciless; the only way I'm going to feel sorry for him is if his mom caves and buys the second bike.

He threatens to "...sleep in Toys R Us" and "...move to Alabama" if she doesn't buy the bike. Says he'll "never hug her again." "You and daddy never hug me anyway", he accuses (not true. I saw them hugging earlier, confirming my growing suspicion that the kid is a liar.) "Mommy, why don't you love me?", he cries, pummeling her leg with force. And she finally breaks, "STOP IT! STOP IT, BILLY. I CANT TAKE THIS," she yells. People walking in the door at that moment look at her like she's Hitler. Little do they know, she's not an abusive mother, he's an abusive child; a ruthless criminal mastermind capable of lying, extortion, blackmail, assault -- whatever it takes to get his way.

I finally walk out of there and see that I spent $235 on a few hunks of plastic. The psycho kid is being escorted out by his mother, who holds the bike in one arm and her flailing devil child in the other. His scream buckles into a whimper as they approach the car. "I'm sorry mama," he sniffles. "Let's never come back to Toys R Us again." He's apparently transformed back into the sweet little angel that entered the store. I forgive him instantly: Not guilty by reason of temporary Toys 'R' Us-induced insanity.

It suddenly dawns on me that the dolls in the dollhouse I bought look like zombie babies. They have round eyes with black exes over them -- ya know, the international symbol that something is dead. What seemed cute to the fight-or-flight brain I was operating out of in the store now seems creepy in the extreme. 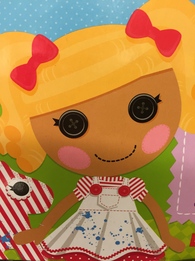 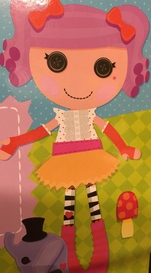 My sister, (who won't let her daughter play with Hello Kitty products for fear of "the kind of person she will grow into", a cat lover? An Asian??) is definitely not going to sanction dead baby dolls. Why would anyone make something this creepy for children? And who the hell would buy such a thing? Me, apparently. I Google it and see that the dollhouse is from a super popular line of children's toys called Lala Loopsy (which incidentally is also the name of a crack whore in Detroit.) I take a deep breath and and bravely march back into Toys 'R' Us, returning these objects of evil back to the fires from which they were forged.