This Entry Was Co-Authored By Lori Wallach & Murshed Zaheed 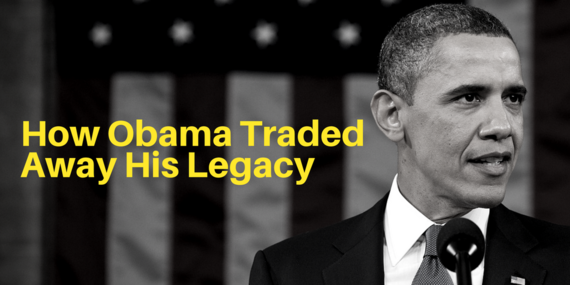 Donald Trump is preparing to wipe President Barack Obama's legacy from existence. The Affordable Care Act, Dodd-Frank and protections for the environment and immigrants all are set to disappear in no part small part thanks to President Obama himself and his relentless advocacy for the Trans-Pacific Partnership (TPP) right through Election Day.

And President Obama still won't face the sorry truth, this week declaring that he would have beaten Trump if he had been the candidate. After years of siding with corporate America to pass various job-killing trade deals over the opposition of congressional Democrats, he announced that it was "nonsense" that anyone should have the view that "Democrats have somehow abandoned the white working class."

Yet in fact, post-election polling and exit polls confirm that Trump flipped decisive states because he connected with voters' fury about job-killing trade deals.

Trump won Wisconsin, Michigan and Pennsylvania by 23,000, 11,000 and 68,000 votes, respectively. The number of people in those states certified as having lost jobs to trade since the North American Free Trade Agreement, or NAFTA, is 78,331, 159,252 and 182,017 under just one government program that captures a fraction of trade-related job loss.

Meanwhile, President Obama's closing argument for Clinton at a Michigan rally the day before the election was to "continue this journey of progress," effectively promising a third term of an Obama presidency that had spent the past two years prioritizing the implementation of a trade deal despised not only by working class Midwesterners, but the entire Democratic Party base. At the Michigan event President Obama also declared that the "trade war" Trump was threatening by renegotiating NAFTA, imposing tariffs on vehicles made in Mexico by Detroit's automakers and opposing the TPP would hurt the economy.

This followed scores of Obama administration events and op-eds touting the benefits of the TPP in swing states during critical stages of the campaign, despite pleas by Democratic congressional candidates and party strategists to desist.

Was it coincidence that Clinton lost the western Wisconsin counties along the Mississippi River, which have historically always voted Democratic? Or did Agriculture Secretary Tom Vilsack's Oct. 12 event there to release a TPP-promoting report have unintended consequences?

Support for the TPP signaled to those whose lives have been turned upside down by the trade policies of the past 25 years that the Democratic Party did not care about them. That message was conveyed repeatedly to the administration and Clinton campaign by union officials who heard it from their angry members.

The fury was reasonable. Bill Clinton promised American workers that hundreds of thousands of jobs would be created by the 1994 NAFTA and the 2000 grant to China of U.S. Permanent Normal Trade Relations. Instead, a flood of new imports transformed a small trade surplus with Mexico before NAFTA to a $115 billion deficit today. The deficit with China reached $376 billion in 2015 - the largest annual trade deficit in recorded history.

Hundreds of thousands of American manufacturing jobs were destroyed. Those workers joined the pool of Americans without college degrees - 69 percent of us - competing for lower wage service sector jobs. This pushed down wages and fueled an increase in income inequality not seen since the late 19th-century "robber baron" era.

Trump's win was foreshadowed in 1994 when Democrats lost control of the House for the first time in four decades as working-class voters enraged about NAFTA abandoned the party.

But in the arc of the Democratic betrayal of working people on trade, more damning was President Obama's flip-flop. He campaigned in 2008 against George W. Bush's U.S.-Korea Free Trade Agreement, engaged in a primary battle to be more anti-NAFTA than Hillary Clinton and John Edwards and initially put the TPP on ice in 2009.

He then proceeded to push the South Korea deal after modest tweaks, claiming it would create 70,000 new American jobs. By early 2016, the U.S. trade deficit with South Korea had doubled as exports dropped and imports soared. This trade deficit increase equated to about 100,000 more U.S. jobs lost, plugging the import/export data into the formula the administration used to predict job gains.

And then, although the damaging Korean deal was literally the template for the TPP, Obama proceeded to make it the capstone of his administration. The pro-TPP campaign was more vigorous than any other previous Obama initiative.

The deal was dead before Election Day, having never gained majority support in Congress during the 10 months after President Obama signed it.

But President Obama's election-year obsession with the TPP sent a message to American workers that was deadly to Hillary Clinton's campaign as it elevated Trump to the White House and ultimately damaged - if not destroyed - the president's own legacy.