WASHINGTON -- On Friday night, in an impressive display of dysfunction, the U.S. Senate approved a controversial trade bill with a provision that the White House, Senate leadership and the author of the language himself wanted taken out.

The provision, which bars countries that engage in slavery from being part of major trade deals with the U.S., was written by Sen. Bob Menendez (D-N.J.). At the insistence of the White House, Menendez agreed to modify his language to say that as long as a country is taking "concrete" steps toward reducing human trafficking and forced labor, it can be part of a trade deal. Under the original language, the country that would be excluded from the pending Trans-Pacific Partnership pact is Malaysia.

But because the Senate is the Senate, it was unable to swap out the original language for the modification. (The chamber needed unanimous consent to make the legislative move, and an unknown senator or senators objected.) So the trade promotion authority bill that passed Friday includes the strong anti-slavery language, which the House will now work to take out to ensure that Malaysia (and, potentially, other countries in the future) can be part of the deal.

Observers are left with a deeper question: Why, in the year 2015, is the White House teaming up with Republican leaders essentially to defend the practice of slavery?

Understanding this is key to understanding why President Barack Obama has been pushing so aggressively for a trade deal that so many of his allies insist will harm American workers. It's about global power, geopolitics and pushing back against the rise of China. And that starts with Malaysia.

How bad is Malaysia?

Why is Malaysia so important?

A century ago, U.S. foreign policy focused on the brand-new country of Panama. Wars were started, coups were plotted, deals were struck, all toward the end of controlling access to its just-completed canal. Today the Panama Canal is still a global trade "chokepoint" that shipping must pass through. Another chokepoint, equally if not more important, is the Strait of Malacca, which lies between the Indonesian island of Sumatra and the Malay Peninsula.

Unlike Senate Democrats and labor leaders, many experts on U.S.-China relations consider the Trans-Pacific Partnership essential. They argue that the deal, which the Obama administration is forging with 11 other Pacific nations, will show that Washington is not going to allow an expansionist Beijing to dominate the region with tactics ranging from bullying smaller nations to building island fortresses in disputed waters. A March 2015 report from the Council on Foreign Relations lists granting Obama trade promotion authority -- which will grease the skids for the TPP to pass Congress -- as the top way in which the legislators can ensure a smart U.S. response to China's rise.

Malaysia, and the Strait of Malacca, is the lynchpin of that kind of thinking.

Why is the Strait of Malacca so critical?

That thin waterway links the Pacific Ocean to the Indian Ocean. Through it last year passed 85 percent of China's imported oil, according to the latest U.S. Department of Defense estimates. Imports provide 60 percent of the oil that China's growing economy needs. (Note that the Defense Department is keeping this information.)

The U.S. Navy currently dominates this vital strait courtesy of warships that are based in Singapore (at the southern end of the Malay Peninsula) and tacitly welcomed by Malaysia. Both of those nations are perturbed and directly threatened by China's muscular actions in their neighborhood. In a sign of its concern, Malaysia has even offered to expand the American military footprint in the region by hosting U.S. Navy aircraft.

For the Malaysians, the worry is not simply the Strait of Malacca. It is the idea that China may become a hegemon in the South China Sea. Beijing's expansion there has directly infringed on waters claimed by Malaysia, the Philippines, Brunei, Vietnam, Indonesia and Taiwan.

That region is already vital for global trade -- 60 percent of international commerce travels through it -- and potentially the future of energy because of its oil and gas deposits. Then-Secretary of State Hillary Clinton said in 2010 that the U.S. had a national interest in maintaining free passage through the South China Sea. CNN chief national security correspondent Jim Sciutto revealed Tuesday that the U.S. may soon send aircraft and warships even closer to the contested islands being fortified by China.

By reaffirming ties to Malaysia through the TPP, the U.S. would secure its ability to pressure China -- and punish it for disruptive behavior in the South China Sea and elsewhere-- courtesy of the Strait of Malacca.

China has tried to diversify its supply of energy, through measures like building overland oil pipelines, including a pipeline to a Burmese port that lets ships bringing oil to China bypass the Strait of Malacca. But the just-released Pentagon report concludes that the strait and other sea lines will only become more important as China's energy demand grows.

All of this makes a TPP without Malaysia a TPP that is far less strategically valuable to the U.S. -- and that sends a much weaker signal to China.

Yet congressional opponents are sticking to their guns as they argue that Malaysia should not be included in the deal at all. The U.S. has tacitly controlled the Strait of Malacca for decades, yet the American middle class has eroded nonetheless, with gains flowing to the top one percent instead. Critics of the deal ask why the American worker should be asked to suffer further simply to prop up a global system from which they don't see the benefit.

While the modified language in the trade bill would require Malaysia (and other potential trade partners) to set forth plans to combat human trafficking, Democrats insist that isn’t enough. They argue that the U.S. has other leverage it should use: Malaysia would prefer to partner with the U.S., as China is more likely to make significant demands when it comes to control of the smaller nation, whereas the U.S. is largely content with control of shipping. That gives Malaysia an incentive to improve its record on human trafficking to become part of the TPP, rather than be pushed into China's arms.

“If nothing changes, Malaysia should not be in this agreement," Sen. Sherrod Brown (D-Ohio) told The Huffington Post after the Senate passed the trade promotion bill on Friday night.

Brown added that “no country should get in with that designation,” referring to Malaysia's Tier 3 ranking. He said he plans to try to build momentum in the House against granting the president trade promotion authority and is hopeful that Republicans will be unable to tweak the anti-slavery language in the Senate bill.

If the House isn't able to modify the anti-slavery language and thereby secure the U.S.'s chance to sign a deal with Malaysia, Brown's goals could be accomplished -- and Obama's vision of a strong TPP and U.S. authority across the Pacific could be shattered.

Why Is The U.S. Desperate To OK Slavery In Malaysia?
China Gives Rare Glimpse At Naval Ships 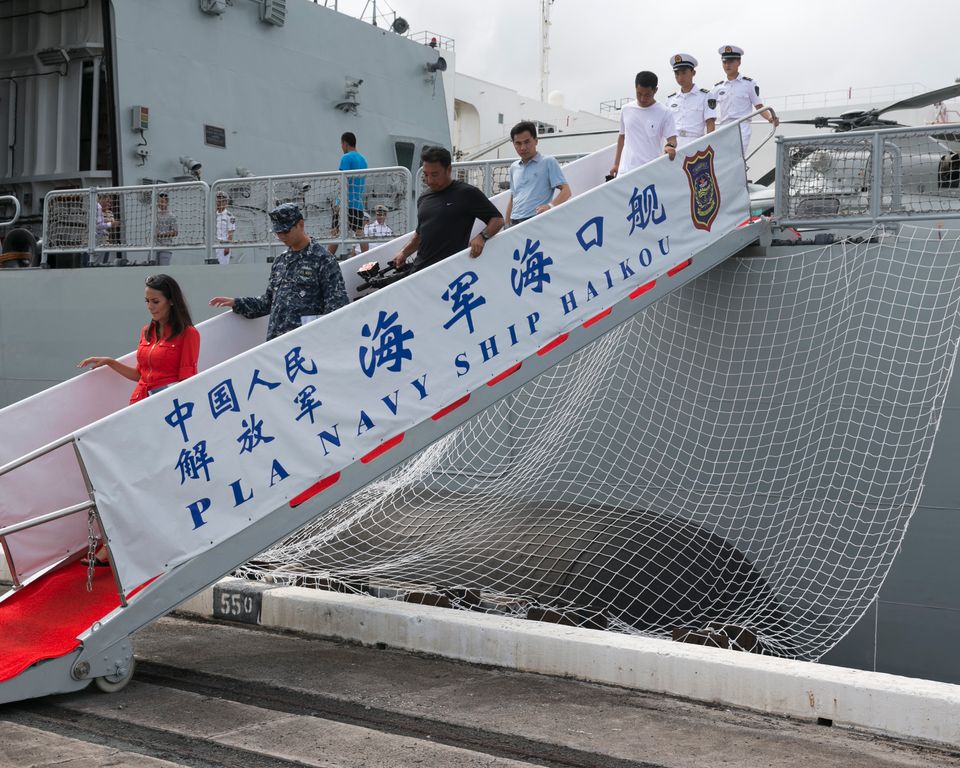