For months, arguments in favor of the huge new trade deal, the Trans-Pacific Partnership have fallen flat with the public. His "hit parade of failed arguments" gives the deal an air of desperation. The overwhelming public impression is that TPP is written by and for corporate interests, and has little for workers, communities, or the environment.

The President's best remaining pitch was his promise of strong enforceable standards for labor and the environment. Last week, that collapsed in a breath-taking display of cynicism. 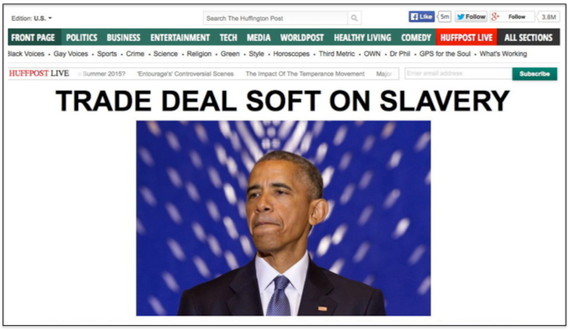 On May 8, President Obama went to Nike in Oregon, to insist that TPP would fix the broken promises of past trade deals going back to NAFTA.

"And if Vietnam, or any of the other countries in this trade agreement don't meet these requirements, they'll face meaningful consequences. If you're a country that wants in to this agreement, you have to meet higher standards. If you don't, you're out. If you break the rules, there are actual repercussions."

A great speech, by all accounts.

Just days earlier, the Senate Finance Committee had voted to exclude from TPP any country on the State Department's "Tier 3" list of worst countries for human trafficking, as defined in the US Trafficking Victims Protection Act.

Malaysia and Vietnam are TPP countries. Vietnam is in Tier 2 - bad for human trafficking, but not worst. Malaysia is on the Tier 3 list of worst countries.

The Senate language would exclude Malaysia from TPP, although Vietnam could stay in.

In its 2014 report, the State Department downgraded Malaysia from Tier 2 to Tier 3 because of its long history of human trafficking, forced labor, sex trafficking and child labor.

The most recent US Department of Labor report shows that Malaysia uses forced labor in its electronics and garment industry, and child labor to produce palm oil. Mass graves were recently discovered with 139 bodies of men women and children showing signs of torture. Many of the victims in Malaysia are Rohingya Muslims who are exploited by human traffickers, held for ransom, and traded among other smugglers.

In Malaysia, investigations, prosecutions and convictions are down. This deterioration in enforcement occurred while Malaysia was helping negotiate the labor provisions in TPP.

On May 19, in an abrupt about-face, Senator Menendez tried to soften the language that he had originally proposed to the Finance Committee, excluding Tier 3 countries from the TPP.

For his new standard, he said,

"... any Tier-Three-rated nation hoping to benefit from the Trans Pacific Partnership will have to ... make concrete efforts to meet the standards stipulated in the Trafficking Victims Protection Act or they will not have the benefit of privileged, fast-track access to our markets - Period!"

For procedural reasons, the Senate version advanced to the House with the stronger language that would keep Malaysia out of TPP.

Last week, in the House Ways and Means Committee, TPP supporters and the White House were scrambling to reverse the Senate's strong conditions on human trafficking. The weaker House provisions will probably go into the Customs Enforcement bill, which will be taken up near the end of a package of trade bills.

This raises the obvious question. "Why, in the year 2015, is the White House teaming up with Republican leaders to defend the practice of slavery?"

Economist Dean Baker looks toward the real values held by our negotiators. "The slavery story just speaks volumes about what is important and what isn't," he said. "We are prepared to go to the mat for stronger patent and copyright protections, but we don't want prohibitions on slavery to impede the advancement of a trade deal."

By chance, last week I attended a meeting in Seattle with a member of the House Ways and Means Committee. He was asked what purpose was served by relaxing the labor standards in the Customs Enforcement bill, and waiving the sanctions against Malaysia? He said we're not perfect. We have human trafficking in America, too. Before serving in Congress, he had life experience with victims of human trafficking. He has seen children who were trafficked when they were invisible to everyone else.

He said it was better to have a relationship with Malaysia, based on friendship, trust, and communication, so that they can benefit from trade, create new jobs, and then victims of forced labor can have those good jobs.

Of course, Malaysia already has plenty of jobs in its electronics, garment and palm oil industries. That work is done by forced labor and child labor.

I have a friend who worked in Thailand and is very familiar with suffering among Rohingya refugees. She and I are both astonished that TPP supporters could abandon Malaysian victims of 21st Century slavery.

Human trafficking is indeed a problem in our communities.

Forced labor is a problem in America, and around the world.

When we identify with victims of human trafficking in our own communities, we should see the connection to standards for globalization that we set in trade agreements.

This issue is not new. For 20 years, labor leaders have emphasized the weak language and very poor track record on labor rights and human rights in every deal since NAFTA. Our trade negotiators have never shown any meaningful appreciation for either labor or environmental standards.

In 2007, Congress expanded labor and environmental protections, in the "May 10th agreement." Despite high hopes, this agreement has produced nothing of consequence in 8 years, beyond one "consultation" with Guatemala.

To diplomats and trade negotiators, the standards are met when countries pass appropriate laws, even if labor violence continues. In Colombia, 105 labor activists were murdered, and over 1300 death threats were reported since a special Labor Action Plan went into effect there 3 years ago. Richard Trumka from the AFL-CIO testified to Congress,

President Obama's speech at Nike was inspiring, eloquent but more than a little creepy, coming at the headquarters of a company whose singular contribution to business strategy was to scour the earth for the lowest wages and least worker bargaining power to produce its goods.

After the speech, President Obama could hold a straight face for only 11 days before accepting slavery into his signature trade agreement.

Ultimately, trade deals are moral, social, political and economic documents that express our values as a country. Our own labor and environmental standards are already under downward pressure. "Setting the rules" at the level of Malaysia's human trafficking would be a miserable and ironic outcome for President Obama's 21st Century trade deal.