A century ago, Carl Sandburg dubbed Chicago the City of Big Shoulders: “hog butcher for the world, tool maker, stacker of wheat, player with railroads and the nation’s freight handler; stormy, husky brawling.”

All of this was true of America itself as well: Nation of big shoulders. The United States was a brawny country that would intervene to help win World War I and later quickly retool factories to serve as munitions mills to win World War II. Now, though, as America’s tool makers and freight car builders are furloughed, their factories shuttered and offshored, America is wasting. Ill-conceived free trade deals are reducing it to a nation of stooped shoulders.

The newest proposed deal, the Trans-Pacific Partnership (TPP), signed in New Zealand last week by representatives of its 12 member states, would further enfeeble American manufacturing. The first of the ilk, the North American Free Trade Agreement (NAFTA), devastated U.S. manufacturing. Allowing China into the World Trade Organization and the bad trade deals that followed NAFTA all pummeled American manufacturing when it was already down.

From cookies to car parts, factories fled America for places like China and Mexico. There, corporations pay workers a pittance and pollute virtually penalty-free. CEOs and shareholders roll in the resulting royal-sized profits. Meanwhile, formerly middle-class American workers and their families suffer. Communities bereft of sustaining mills collapse. And the United States atrophies, losing more and more of those once-bulky industrial shoulders. 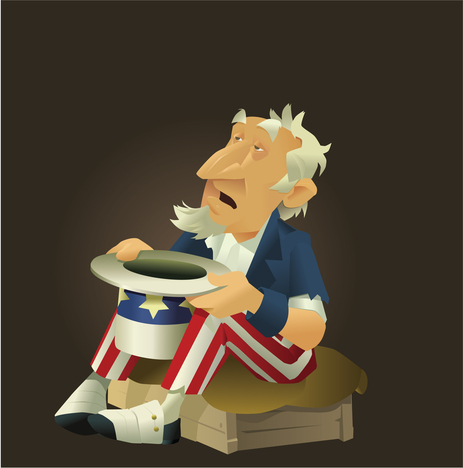 NAFTA crushed 300 decent middle class workers in Grand Rapids, Mich., last week. They make automated conveyor systems for a company called Dematic. Represented by the United Auto Workers (UAW) union, they earn between $11.55 and $24.26 an hour. That means the best paid among them receive the median wage for a U.S. worker.

Soon, however, they’ll have no wages. That’s because they can’t compete with the $1.50 to $1.70 per hour paid to workers in Monterrey, Mexico. Several weeks ago, Dematic told the workers it would move the factory to Mexico unless the UAW came up with a better offer.

The workers voted unanimously not to submit a counter proposal. It’s illegal in the United States for workers to labor for $1.50 an hour. So the company, founded in Grand Rapids in 1939, will sever its American roots, shed its American workers and squat in Mexico.

It will follow a well-beaten path. Grand “American” brands Hershey’s and Whirlpool and Nabisco and La-Z-Boy and many others all closed American factories, laid off American workers and opened plants in Mexico. GM, Ford and Chrysler all built plants in Mexico. Car factories in Mexico produced about one in five vehicles made in North America in 2014, double the rate from a decade earlier.

Not all of them moved to Mexico or offshore. But many did. And when they did and shipped their cars or Hershey bars back to the United States, that contributed to the nation’s ever-ballooning and increasingly dangerous trade deficit. The trade deficit in manufacturing hit $831.4 billion last year, up 13.2 percent from 2014.

TPP peddlers have no credibility. The TPP, like NAFTA, provides no protection for American manufacturing or American workers like those at Dematic – other than retraining money for some thrown out of their jobs.

U.S. workers are guaranteed a minimum wage of at least $7.25 an hour, but steps away, just across the border, Mexican workers are not. Dematic can pay them $1.50. A report on the labor provisions of the TPP issued last week by the minority staff of the Ways and Means Committee of the U.S. House of Representatives explains why.

The Mexican government facilitates “company unions,” which are run by corporations in their interests. Napoleon Gomez Urrutia, the leader of Los Mineros, one of the very few true worker-run unions in Mexico, is forced to live in exile in Canada because the Mexican government first falsely charged him with crimes then said it couldn’t guarantee his safety if he returned.

Although Mexico claims that it has established a panel to review that nation’s deeply flawed labor justice system, Gomez pointed out to the Ways and Means Committee that the government neglected to include on the panel even one worker representative. It’s not likely, then, that any meaningful labor reform will result, he told the committee.

The TPP contains weak plans to help countries like Vietnam and Malaysia improve conditions so that Americans workers aren’t placed in competition with forced and child labor there. But the proposed trade deal contains no strategy at all under which Mexico would meet its supposed commitments to improve labor conditions.

So it’s likely manufacturers in Mexico will continue to pay workers there about 20 cents for every dollar a U.S. worker earns. The House Committee report warns, “The lower costs resulting from the lack of worker rights and protections [in Mexico] create a powerful incentive for corporate decision-makers to relocate manufacturing plants and factories across that border.”

NAFTA and the TPP are giant greenbacks for multinational corporations. CEOs close U.S. factories, destroy the lives of American workers and collect bigger profits as a result of the less-than-subsistence wages they pay foreign labor.

Meanwhile, NAFTA, the TPP and the rest of the free trade schemes are sapping U.S. industrial strength, shipping it overseas. They’re emasculating America.