Several years ago, when I traced Barack Obama's roots to Moneygall in County Offaly, Ireland, I never imagined that he would visit his ancestral hometown as President, but on May 23rd, that's exactly what he's going to do. Though I explored Moneygall just last summer, I couldn't resist the temptation to return for what promises to be a festive event -- so I'll be there along with 5,000 others.

With the President's Irish sojourn on the horizon, I thought that this might be a good time to share the sleuthing that led to Moneygall in the first place. Ultimately, it was a pair of tombstones in Ohio that steered me there, but finding them was only one of many steps in the quest.

How It Began
Just before St. Patrick's Day in 2007, a press release went out announcing that then-presidential candidate Barack Obama was part Irish. In fact, on his mother's side, his Irish third great-grandfather, Fulmoth Kearney, is his most recent connection with any old country ancestry. When Fulmoth arrived in New York in 1850, all of Obama's other maternal ancestors were already here.

I was quoted in the press release, and as I have an unusual name, it's not difficult to locate me -- and that's exactly what a number of Irish journalists did. The general gist of all the inquiries I received? So he's part Irish, but where in Ireland did his ancestors come from? I both welcomed and dreaded the question. Why? I like a challenge, but those with Irish heritage know how difficult it can be to identify a place of origin in Ireland. Frankly, I wasn't sure I would succeed, but it was worth a try.

Finding Fulmoth
Obama's maternal roots are what I regard as typically presidential in the sense that they extend back deeply -- in most branches for centuries -- in America. Because of this, the preliminary research proved to be straightforward. I relied heavily on census records to methodically march back generation by generation on his mother's side of the family tree.

As I did so, I scanned for any evidence of foreign births, and made my first such find in the 1870 census for one of his great-great-grandmothers, Mary Ann Kearney. Her father was from Ireland. He was listed as Falmoth or Fulmoth (a little hard to make out) and 38 years old. His name would turn out to be the proverbial mixed blessing. As my research progressed, I would find him as Fulmoth, Fulmouth, Falmouth, Fulmuth, Falmuth and so forth -- a bit of a nuisance though not unexpected. Kearney offered its own complications with spellings such as Kerney and Carney. But ultimately, it was worth the hassle because his name was distinctive and made him comparatively easy to pluck out. On balance, I was grateful to be dealing with a Fulmoth Kearney, rather than a John Murphy.

The Fulmoth Trail
With his unusual name, it wasn't difficult to locate his arrival record in the U.S.. Experimenting with various versions of Fulmoth and Kearney, I found him as Falmouth Carney. He had arrived on the Marmion in New York on March 20, 1850.

While most arrival records from this timeframe furnish just the basics, this one gave Fulmoth's destination as Ohio, so it made sense when he showed up several months later in the 1850 census residing in Fayette County, Ohio. I noticed others in the same household named Carney, Cleary and Canada. No relationships were provided, but the Clearys would resurface later in my research.

By 1860, he had a family of his own and appeared in Deerfield, Ross County, Ohio with his wife Charlotte and several children. A little digging at the Family History Library in Salt Lake City popped up his 1852 marriage to Charlotte Holloway. Around 1866, Fulmoth moved from Ohio to Tipton County, Indiana. This is where I had first spotted him in the 1870 census when I searched earlier for his daughter, Mary Ann. By the time of the 1880 census, he had passed away, so the documents I had gathered to this point briefly outlined Fulmoth's life in America -- but now I needed to cross the pond. Fortunately, these same documents provided me vital clues for doing just that.

Connecting the Dots
One of the most effective techniques for research is what I refer to as "surround and conquer" -- also known as collateral research. When you can't find what you're looking for by focusing on the paper trail of a particular individual, it's a good idea to broaden your search to include the trail of others associated with him or her, especially relatives.

In Fulmoth's case, I accidentally did this without even trying simply by finding his arrival record. I was fortunate that such an early record showed the intended destination of the travelers, and more fortunate still that Fulmoth -- and only two others, William and Margaret Cleary -- were headed to Ohio. Typical for the time, most of their fellow passengers were heading for New York, but this troika stood out. Why were these famine-era immigrants going to Ohio? I didn't know, but I was glad of it -- and even happier when I realized that William and Margaret were also in the same household with Fulmoth in the 1850 census. Clearly, there was a connection.

I decided to focus of William and Margaret Cleary and easily found them in the 1860 census living with an older couple named Joseph and "Pharb Kearny" (Phebe Kearney). Hmmm... maybe Margaret Cleary was Fulmoth's married sister and Joseph and Phebe were his parents. That would certainly explain why he had named his first daughter Phebe. It would also be a serious bonus as I hadn't expected to find his parents in America.

Fulmoth's Family
Using this notion as my hypothesis, I looked for records pertaining to all the people in this emerging family tree and started piecing together a likely family for Fulmoth -- parents Joseph and Phebe, sisters Margaret and Mary/Mary Ann, and a brother named William.

Particularly helpful was a website by a researcher named Roger Kearney. This site was tantalizing in that it included mentions of what appeared to be pockets of this same family -- but Fulmoth was nowhere to be seen. Still, I badly wanted to believe my blossoming theory because Roger's site included a tombstone transcription for Fulmoth's possible father that gave his birth place in Ireland. In the hope that there might be more clues, I commissioned an Ohio-based genealogist to go to the cemetery and photograph all the graves. Roger had transcribed most of them, but I needed to see photos of the actual tombstones myself.

In the meantime, I continued to mine his site for clues and that's when I spotted another interesting transcription -- the will of a Francis Kearney, dated January 28, 1848. In it, he left land owned in Ross County, Ohio to his brother, Joseph, "if he comes to this country." Could that have been the spark for the departure of Fulmoth's family from Ireland? I had assumed it was the famine, but could it have been that Francis was Fulmoth's uncle and that his promise of land had lured the family to America?

Coming to America
I decided to see if immigration records could support a will-triggered migration and quickly found the evidence I was seeking. Fulmoth's probable father, Joseph, had arrived in New York on April 25, 1849 on a ship called Caroline Read. As I had discovered earlier, Fulmoth, his sister and brother-in-law had followed in March of 1850. His likely mother, Phebe, arrived in New York on August 28, 1851 on a ship called Clarissa Courier with her children Mary and William.

Yes, this all meshed nicely. Francis Kearney had died only a week after making his will in 1848. Allowing time for his brother back in Ireland to get the word and make appropriate arrangements, the family had left for Ohio in annual waves in 1849, 1850 and 1851 with Fulmoth riding the middle one.

Better yet, when the tombstone photos arrived from Ohio, it was possible to piece still more of the puzzle together. Parents Joseph and Phebe had died in 1861 and 1876 respectively. I already had an idea of what had become of Margaret, but the stones revealed that brother William had died in 1855, just a few years after arriving in America, and sister Mary Ann in 1866.

To Ireland!
Thanks to the cemetery photos, I finally had the information I had hoped to find -- the place of origin in Ireland. The tombstones for Fulmoth's father Joseph and brother William both indicated that they were born in Moneygall in Kings County (now County Offaly). 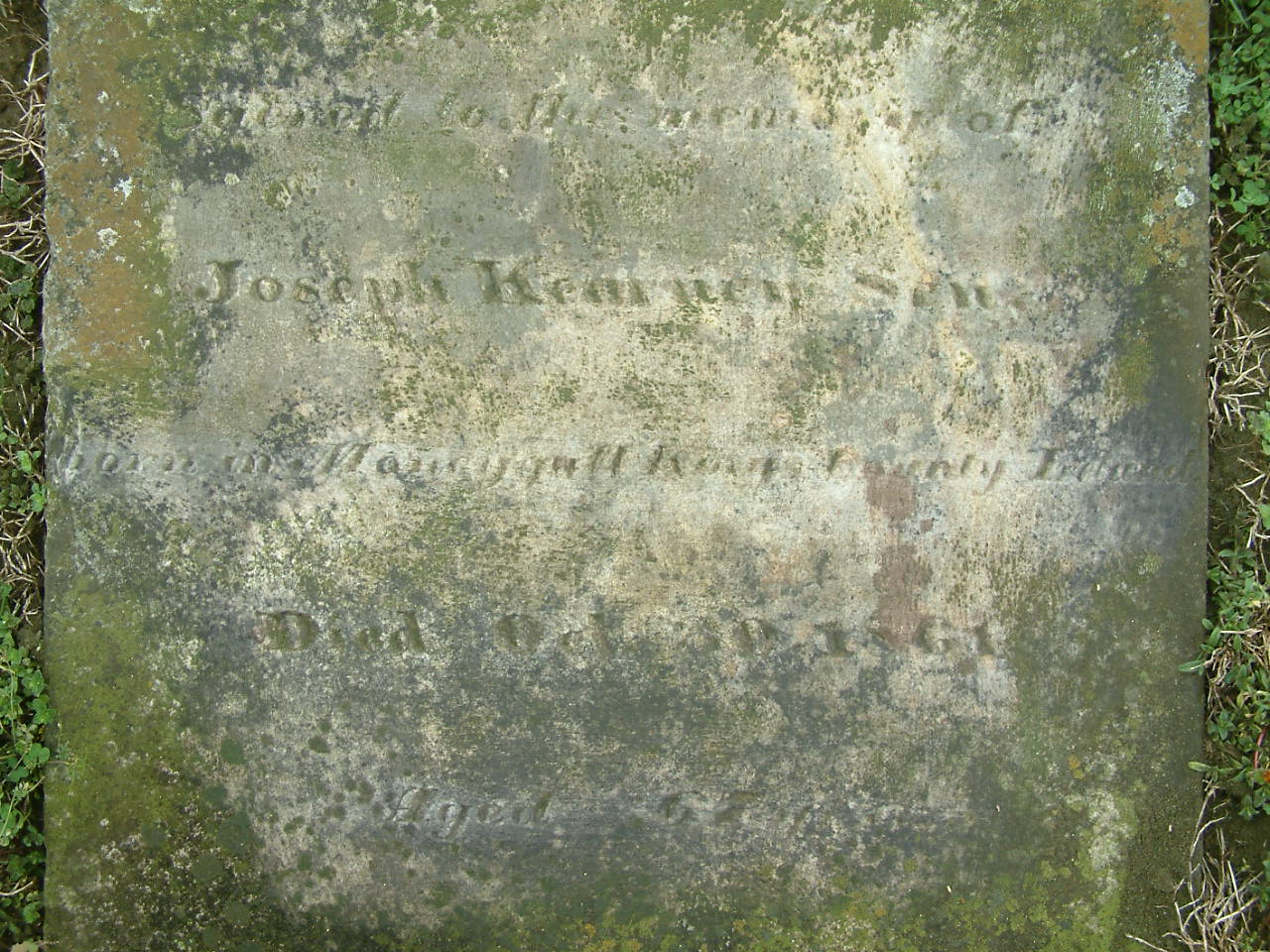 Although I was confident about Moneygall, the logical last step was to locate the family in records in Ireland. Countless articles have covered this home stretch of the search. A number of churches were approached with a list of names and dates for likely baptisms and marriages in the Kearney family, and it was Canon Stephen Neill who found the corresponding entries in the records of the Templeharry Rectory of the Church of Ireland. Now I had substantiation from both sides of the ocean that the family hailed from Moneygall.

See You in Moneygall!
So Moneygall gets the bragging rights, as well as a Presidential visit, and they're in overdrive mode preparing. The entire town has been painted (including one house that now looks like an American flag), vicar Stephen Neill, publican Ollie Hayes and Obama's cousin, Henry Healy, have done back-to-back interviews in anticipation of the day, the Corrigan Brothers whipped up a Welcome Home, President Obama song for the occasion, and a $10 million travel plaza has been announced for the vicinity. Like all the good folks of Moneygall, I'm counting down the days!

Note: Much of the preceding is excerpted from Who Do You Think You Are?: The Essential Guide to Tracing Your Family History.