Green leaves are flickering and peacocks are howling outside my tent. I lie in an enormous bed strewn with flower petals as the night begins to lighten, with a half-moon still in the sky. A young man sets a pot of steaming coffee on the veranda; a squirrel jumps onto the cream. This is my first morning at the Leopard Trails safari camp in Yala Park, Sri Lanka, a natural reserve of 96,000 hectares renowned for the highest density of leopards in the world. 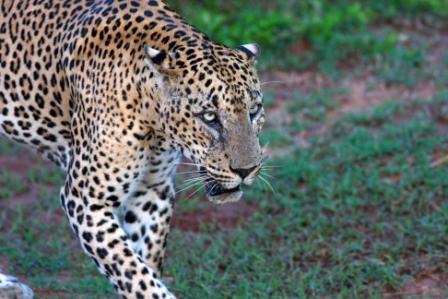 Yet I did not come to Leopard Trails to spot a leopard. Nor for the luxury of the fully stocked bar, the gourmet fish curries in coconut milk, the handmade soaps, the Chilean wine or the room service. I came for the passion: the passion of the rangers who have chosen to live here in the wilderness, year-round, who wake as the sun rises to search for animals in the jeeps and sleep as the crickets chirp, and who are tirelessly enthusiastic about sharing (or learning) any wildlife fact.

"I think of my role as hopefully being more than just showing guests the animals," said Andy, the ranger with bright honeyed eyes, a South African recruited this year from Johannesburg. "I hope to open the door to a new experience."

The door opened for me my first evening as I shared shots of arrack with rangers Arran and Andy before a wood-burning fire, looking out over the trees, grass and rain-water lake, lit by the stars and moon, and realized how connected these men were with a natural existence I only have hints of in Paris, when I hear the occasional bird. 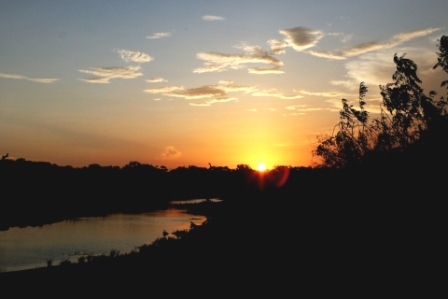 Andy has a degree in zoology and biology, and was trained in one of the best safari schools in South Africa. Before Leopard Trails, he worked as a guide to photographers filming meer cats in the Kalahari desert, as a ranger in five star lodges in Kruger Park, and as a conservation assistant for the Jane Goodal Chimp Eden Institute, where he had the luck to be greeted by Jane Goodall herself. His first month at the Institute, a good portion of his right arm was chewed by an angry chimp who broke through an electric fence. Andy grins and shows me the missing muscle and scar. A month later, he was back working with that chimp.

"Jane is like an angel, descended to earth!" he tells me with rapture. "She has such presence."

Arran has been fascinated with wildlife since he saw ducks in his backyard in the English countryside, when he was three. "I just loved watching them!" he exclaims, in his bubbly way. As a teenager, he did everything to be with animals. He researched the human elephant conflict, handled reptiles in the Colombo zoo, worked as a game ranger in South Africa, studied spiders in Australia, explored butterflies in Candy and tracked mountain leopards in the Horton Plains: all before age 20.

The two rangers sat in chairs looking out into the bush as if two spectators before an enormous movie screen. 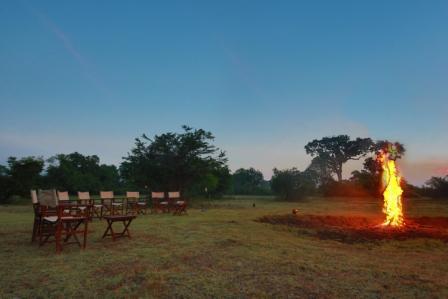 "When there are no guests, you guys just sit here, alone?"

The two men joke together constantly, swapping wildlike facts like the name for mammals who lay eggs (monotreme), and slapping each other high five on particular good observations. They are similarly jovial with the Sri Lankan team that makes this safari work: the native guide who jumps in the jeep with us to track footprints; the gourmet chef who once worked in Saudi Arabia, on a compound; the young men who bring glasses of chilled wine to your tent; the elderly driver, Sugathes who, over his long career, managed to acquire a fleet of a dozen jeeps, yet still keeps working as a driver, as he "loves to drive and look for animals."

"Don't you ever tire of it?" I asked, as the jeep bounced violently up the dirt road, past a wrinkled elephant and an egret. 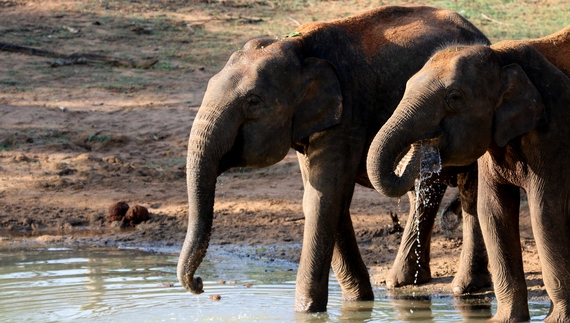 Andy raised an incredulous eye. "Tired? Of course not!"

He waved his hand at the watering hole before us. I listen to the quiet bath of sun--the chirping of birds---the splash of water. Crocodile eyes peer among the floating white lotus flowers while water buffalo sink to their ears and a dozen painted storks, with pink feathers, stand high on a sand bank. Behind them, a harem of spotted deer, in soft brown and white, gently gather on the hills. Spotted deer are the primary food for leopards, the apex predator in Yala, Andy tells me. Every three or four days, the leopard kills and stores his deer high in a tree to munch on.

"It's a very fair system," Andy commented. "Everything is harmonious in an eco-system. Eat and be eaten." 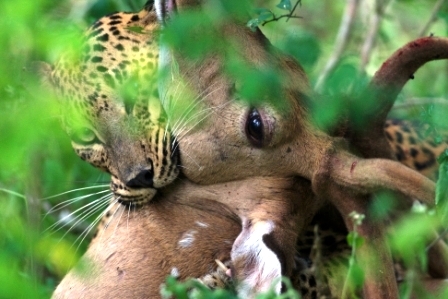 "He's not moving!" I said--pointing to a mugger crocodile lying on a rock.

"He will probably lounge there for a long time, enjoying himself," explains Andy. "He just fed on a huge buffalo two days ago, and now he will not have to eat for months. Crocodiles can go a year without eating."

Crocodiles, I learn, catch prey with their jaws, then drag them underwater to drown them, storing them in the liquid deep for over a week before they eat. They prefer soft rotting flesh.

But where was that leopard?

Sugathes the driver suddenly roars the engine and breaks down a new path, alerted by the spotted deer's danger calls. He points to leopard pugmarks in the dirt: three lobes on the metatarsal (back pad), with no claw marks, as leopard claws are retractable.

No leopard to be found. 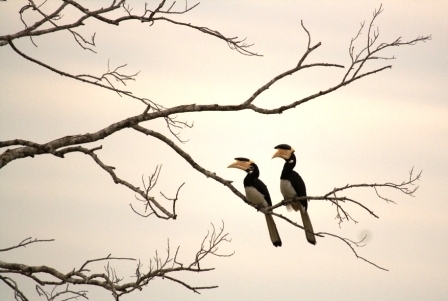 I also learn a lot about trees: the elephant delight creeper with heart-shaped leaves, the palu tree whose fruit makes bears drowsy, the Chinese Lantern tree, the neem tree and--a favorite for leopards--the tarmarind. I learn that even trees communicate with each other. Alarmed acacia trees, which have been ravaged by hungry giraffes, will let off a scent (ethylene) that the wind carries to neighboring trees, who within ten minutes will produce more tannin to make their leaves bitter so the giraffes will not eat them in turn.

"But giraffes move in seconds, and can get there first!" Andy says.

Our most passionate conversation: mating in the wild. The mating process for peacocks, I learn, is a dance. Peacocks jiggle their rear to show their stamina; the pea hen, if interested, will look him in the eye, turn away, then look back again--much like the coquettish human female in the countless modern courtship dances I saw on video monitors on the long bus rides through Sri Lanka. 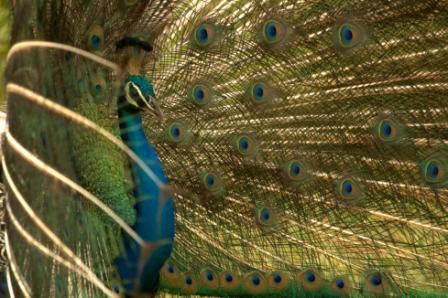 The female always has the final choice.

Ibid for the weaver bird: the male will make a nest (an oblong igloo of sorts) for three weeks, carefully choosing and carrying each grass in its beak. But if the lady bird does not find his nest suitable for her potential egg, she will break it to pieces with her beak, and make him start all over again.

"Sometimes," Andy said with compassion. "The poor bird will make the nest three times, and she will break it. And he tries so hard!"

As for the sex life of my favorite animal, the crocodile: its genitals are inside, in "cloaca", and emerge only for mating. Then the two crocodiles will mate stomach to stomach.

The Leopards Trail camp is a relatively new enterprise, just opened in the last year by a group of adventurous businessmen in Colombo, inspired by their own safari experiences in Africa. The passion of the outfit speaks to the boom in tourism that Sri Lanka has been enjoying ever since the country emerged, in 2009, from a 25 year civil war. I happened to be at the camp the day Sri Lankans elected, to the country's surprise, a new president, an antidote to the family corruption endemic to the previous president's nine year regime.

A testimony to the splurge in Sri Lankan tourism: Every so often, a jeep passes, filled with German, Chinese, Greek, Russian, English or Australian tourists. I note that ours is the only jeep where the guides are actually talking--animatedly--to the guests.

We detour to the tip of Yala, to a long ocean beach with warm sand and foam.

Arran looks worried; he does not want to disappoint us.

"Look!" he says excitedly. "There's skat! Leopard crap!" White dusty stools lie in the road, mixed with fur: the bones and fur of the deer the leopard has just eaten.

We bounce down the road following the trail of excrement.

Where was that leopard?

Frankly, I didn't care. Indeed if anything at all mars this high-end camp it is the urgent need to find that leopard, catering a bit too kindly, in my opinion, to some of the guests' own predatory hunger to chalk up that wild cat on their "wildlife spotting" list: a search that can be as stressful as a testosterone-driven hunt for profits on Wall Street. Our jeep (and the others roaring along the paths) jerked constantly in trace of that cat, one of the most elusive creatures in the world--who are perhaps elusive for good reason.

Why, I wondered, wasn't it enough to lounge by a lake next to a crocodile and listen to the hoots of peacocks? For me, even seeing a herd of spotted deer, still on a hill, is an unlikely phenomenon. When was the last time I saw a mating mongoose in Paris? 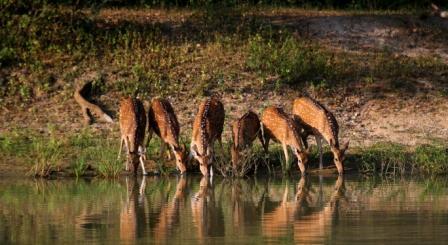 In fact, throughout my two-day sojourn, I could not help but feel that there is something sublimely sad about safaris: Fifty percent of wildlife has disappeared from the planet in the last forty years. To hang out with the wildlife that once roamed the earth (leopards used to roam the entire island of Sri Lanka), and who are now confined to protected reserves, has become today an exceptional experience, an experience available only to the privileged.

Or the passionate: those for whom the wild is not just a two-day holiday.

"I could not live anywhere else," said one of the rangers, gesturing to the bird-rich jungle. "What is strange for me is the way people live in cities: the crowds, the noise, the lights!"

On our last drive, the sun setting into a red ball over the trees, Sugathes gave a cry.

There, the tall sleek form of the leopard. 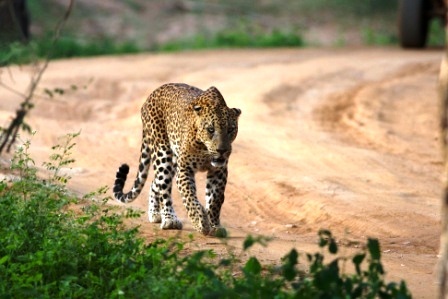 It moved by--and disappeared into the trees.