What did life look like more than 200 million years ago? Ichnologist and paleontologist Hendrik Klein travels to faraway countries to track down dinosaurs and their ancestors.

ResearchGate: What made you want to follow the tracks of dinosaurs?

Hendrik Klein: I was always interested in tracks because unlike skeletons, tracks always tell you something about their producers and their behavior. From a distinct trackway, a complete sequence of pes and manus - foot and hand - imprints, you can see exactly how the animal moved. You can't always get that from just the bones. Bones need to be puzzled together, and finally require some reconstruction. This is often a matter of interpretation. What we want to do is match skeletons and trackways, a challenging task, and a tough part of ichnologists' work.

RG: I suppose you couldn't just follow the trackway to the end and finally find a skeleton?

Klein: That would be great! But no, tracks are only discovered in sites where there are no skeletons and vice versa. For one, that's because their fossilization process is very different. Bones only become fossils if they're embedded quickly. Sediment needs to cover the carcasses so that they're safe from scavengers and other destructive influences. These are bad conditions for tracks. Tracks need to dry in the sun to settle and fossilize. You can see this when you take a walk along a lakeside where an animal has left its imprints. You will see mudcracks forming after a short while after the sediment dries out. With the next sedimentary deposition, for example after heavy rainfall and rise of water levels, the imprints will be completely sealed and ready to fossilize. If the imprints are not hardened before being embedded, they are quickly destroyed. 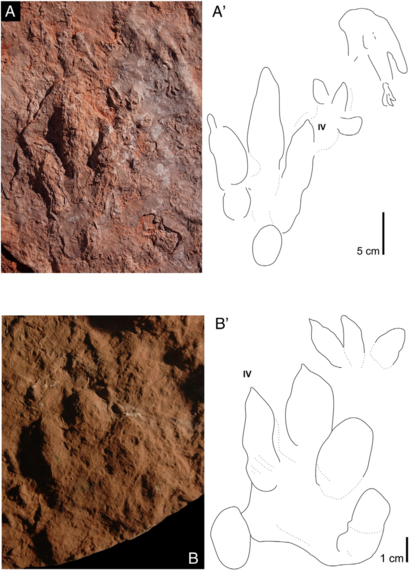 RG: How do you look for tracks then?

Klein: You need continental depositions that were created in shallow waters, on riverbanks, lakesides or beaches. An example of these conditions can be found in the Argana Basin in the western High Atlas Mountains of Morocco which is made up of terrestrial sandstones and clays from former rivers. Ripple marks, small accumulations of sand, similar to tiny dunes where water moved the sand, indicate shallow water from a long time ago. They also offer clues for tracks of animals that might have walked around the water's edge, looking for water and food. In Morocco we found many new tracks this way that were later excavated and documented extensively.

RG: What did you find there?

Klein: In Morocco, we found large surfaces with abundant chirothere tracks in the years 2008-2015. This is exciting, because only a few chirothere tracks were formerly known from Morocco. We also documented important non-human artifacts, such as Protochirotherium and Chirotherium barthii, on the African continent for the first time. Chirotheres are the tracks of basal archosaurs. Archosaurs developed early, presumably during the end of the Perm, 252 million years ago. They have a characteristically narrow gait. Some chirothere trackmakers are considered as dinosaur ancestors.
In 2010 and 2011 we systematically excavated several track surfaces in the Argana Basin together with colleagues from the universities of Freiberg and El Jadida. We discovered different chirotheres and other archosaur tracks, among them dinosauromorph imprints with only three digits. All of these imprints we knew from other places, but had never seen them before in the Argana Basin or even in Africa. We also found an amphibian skeleton nearby and informed Ralf Werneburg, an expert in this field from Germany, who performed a further excavation in order to document and save this valuable fossil.
In September, I'll be travelling back to Morocco, together with an international team. This time, we will work in stratigraphically younger strata from the Jurassic. 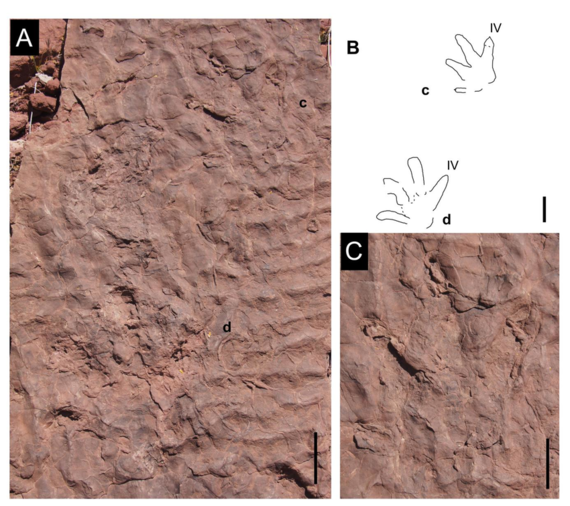 Overview of surface with imprints and ripple marks in the Argana basin. Hendrik Klein et al.

RG: Some of the tracks you follow are more than 200 million years old. Why is it important for us to learn about these tracks today?

Klein: We can trace the evolution of archosaurs and their locomotor apparatus more precisely from the trackways. There are many well-preserved skeletons from stratigraphically younger deposits, but most skeletons from the Upper Perm and the Triassic (252 to 201 million years ago), are incompletely preserved. By combining archosaur tracks and skeletons we can tell the time when the fifth and finally the first pedal digit was reduced. You can even reconstruct the transition from quadrupedal to bipedal gait by studying the trackways. All in all, this helps us to understand life from hundreds of millions of years ago.

RG: What story about the people you and your colleagues encountered in faraway countries struck you most?

Klein: In China, people have been living in close proximity to dinosaur tracks for thousands of years. They became part of their myths and legends, and were related to different animals such as the common golden pheasant. In Shaanxi Province, Middle Jurassic (170 Million years ago) sandstones with dinosaur tracks have been used as building stones and millstones since the Ming dynasty (1368-1644). They show the footprints of different dinosaurs, such as theropods, ornithopods or stegosaurs. We recently published results of our studies together with the Chinese colleagues. It's an interesting example of interdisciplinary research from paleontologists, archaeologists and historians.