Tracy K. Smith, Pulitzer Prize winner and professor of creative writing, is the next poet laureate of the United States.

Carla Hayden, the standing Librarian of Congress, announced Wednesday that she has appointed Smith as the nation’s next poet. Smith will be taking the reins from Juan Felipe Herrera, who was appointed poet laureate twice in 2015 and 2016.

Smith, 45, received the Pulitzer Prize in 2012 for her collection of poetry titled Life on Mars, which “sends us out into the magnificent chill of the imagination and then returns us to ourselves, both changed and consoled,” according to a 2011 New York Times book review.

Smith authored two more books of poetry ― The Body’s Question (2003) and Duende (2007) ― and a memoir, Ordinary Light, which earned her the honor of National Book Award finalist for nonfiction in 2015.

Every year, the Librarian of Congress appoints one “poet laureate consultant in poetry” to serve the Library of Congress. The library’s description for the role is purposefully vague, so the poet laureate has the freedom bring to the official position whatever they desire.

The only steadfast requirement is that the laureate serves as “the nation’s official lightning rod for the poetic impulse of Americans,” according to the national library. In return, the poet laureate receives a $35,000 annual stipend, and $5,000 travel budget.

Smith told NPR that her responsibility as the nation’s poet is to “raise awareness of poetry and its value in our culture” and to bring it to those who are not yet familiar with the art form.

"I pray you are what waits/ to break back into the world" - Tracy K. Smith pic.twitter.com/xBu6hC96zM

Smith was born in Massachusetts and is the youngest of five siblings, according to NPR. She attended Harvard University for her Bachelors and received her Masters of Fine Arts in creative writing from Columbia University. Smith was a Stegner fellow at Stanford University from 1997 to 1999 and, in 2014, she was awarded with a fellowship with the Academy of American Poets.

She currently teaches at Princeton University and, according to NPR, she is working on another form of literature: opera.

Hayden paid tribute to Smith’s poetry work for traveling the world and taking on its voices. It “brings history and memory to life; calls on the power of literature as well as science, religion, and pop culture,”the current Librarian of Congress said. “With directness and deftness, she contends with the heavens or plumbs our inner depths ― all to better understand what makes us human,” she added.

“Poetry can help us make sense of the contemporary moment,” she told The Washington Post.

“I’m excited by the fact that what poets are writing speaks to a particular moment and it speaks to the ages. Any political moment is uncertain, and a voice that lets us think about that will last,” Smith continued. “Let’s think about how empathy can drive our perspective of one another. Let’s think about how we can get past what’s binary and simplest to what’s complicated.”

Smith is due to begin her term as the poet laureate in September. “Wade in the Water,” her fourth book of poetry, is due in stores in April. 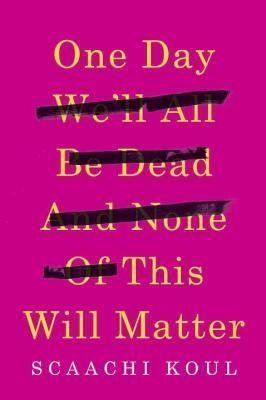 1 / 12
Scaachi Koul, "One Day We'll All Be Dead And None Of This Will Matter"
Scaachi Koul &mdash; a BuzzFeed writer who also played a part in the endearing and odd social-experiment CBC podcast "Sleepover" &mdash; has&nbsp;an irreverent, hilarious and searing view on life, encapsulated in her debut essay collection. From her experiences as the child of Indian immigrant parents in Canada, to the very real realities of being a woman harassed online, her prose is illuminating, smart and a good encapsulation of what it means to be young and female in the early 21st century.<br><br><i>Find this book on <a href="https://www.amazon.com/Well-Dead-None-This-Matter/dp/1250121027/?tag=thehuffingtop-20" target="_blank">Amazon</a> or at your <a href="https://www.indiebound.org/book/9781250121028" target="_blank">local bookstore.</a></i>
Picador