A skin care treatment being promoted by a British model-turned-fashion blogger is rubbing some experts the wrong way.

Her secret: A daily dose of semen smeared on her face.

Tracy Kiss, a former glamor model with two kids, was looking for ways to ease her rosacea, a condition that causes the face to redden, often producing pus-filled bumps, according to the Mayo Clinic.

Kiss may love sperm facials, but dermatologists are strongly against her bodily fluid beauty regimen.

Kiss came about the method after a beautician suggested an acid facial for her rosacea.

The 28-year-old decided to try more natural skincare methods instead.

"Semen builds babies, they come out very soft and have beautiful skin, and it leaves my skin nice and soft, so I'm very happy to use this as a facial," she said, according to the Mirror.

"It feels like a face pack that pulls the skin inwards, it feels so glossy to wipe it off. It's like having a kind of oil on the face or a wax where it just glides beautifully against the water. It's so cooling and soothing."

Kiss isn't the first person to sing the praises of sperm facials.

In 2013, when TMZ asked actress Heather Locklear for anti-aging secrets, she replied,

"You just put semen on your face."

"Spread semen over your face," she advised. “[It’s] probably full of protein as sperm can eventually become babies.”

Dr. Lynne Haven, a dermatologist in Greenwich, Connecticut, hopes the semen facial doesn't catch on with others.

"I've never seen any evidence of benefits, and there are several areas of concern," she told The Huffington Post. "Sexually transmitted diseases, like herpes, HIV and others could be transmitted, and there are many other better treatments for rosacea."

"Semen does have protein, but rosacea is related to hair follicles," he told HuffPost. "I don't see any basis for this working."

Kiss admits getting the semen needed for her daily dose can also be a sticking point.

That's why she recommends a person invest "in a reliable male with a healthy diet and stamina to ensure a plentiful supply, perhaps a boyfriend, husband or, in my case, a health-conscious friend" before beginning the treatment.

She explains in more detail on her blog:

"Whoever you choose to provide a donation, it is important that you use the same caution you would around all bodily fluids, always ensure that they have had a sexual health check and are eating clean and nutritious food a few days before instead of smoking, drinking and binging on junk, or the quality will suffer.

"I would never condone using anonymous semen, and in no way encourage this to become a sexual act. I am simply looking at this from the angle of beauty. You have to strip away the shock-horror of the ingredients and any preconception of how it may feel, smell or look and base it solely on what it does."

Although most of the dermatologists interviewed don't believe Kiss' sperm facial has much medical merit, she gets grudging support from at least one.

Dr. Tess Mauricio, a southern California-based skin doctor, said semen does contain a protease -- that's what helps sperm break through eggs in order to conceive -- so it may also have a chemical or enzymatic effect on human skin.

"It may make the skin feel softer and smoother, but the evidence is all anecdotal," she told HuffPost. "There are more cosmetically acceptable products that can achieve similar results."

New York-based dermatologist Dr. Tabasum Mir concedes that some people may want to give themselves a natural facial, but said semen doesn't really have enough bang to do the job.

"The amount of protein in seminal fluid is small. You'd be better off using egg whites," she told HuffPost. "Plus, sperm has urea -- which is basically pee -- and testosterone, which causes breakouts."

PHOTO GALLERY
WTF Is That??
Download
Calling all HuffPost superfans!
Sign up for membership to become a founding member and help shape HuffPost's next chapter
Join HuffPost 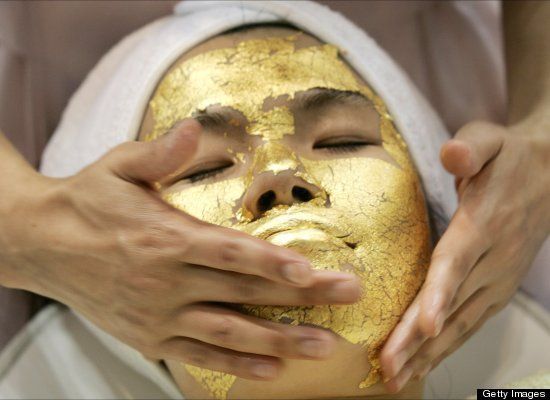 1 / 15
Solid Gold Facial
Why not add a little bling to your beauty routine? Now you can -- if you live in Florida and have enough cash to dish out for the, wait for it, 24 carat gold facial. Yep! Mar-a-Lago in Palm Beach offers spa patrons the opportunity to have their entire body painted in gold. The thought is karats can help stave off cellulite and prevent aging.