America is in an abusive relationship with trade-obsessed politicians and corporations.

Despite their long history of battering the U.S. middle class with bad trade deal after bad trade deal, these lawmakers and CEOs contend workers should believe that their new proposal, the Trans-Pacific Partnership (TPP), will be different. President Obama and the CEO of Nike, a company that doesn’t manufacture one shoe in the United States, got together in Oregon on Friday to urge Americans to fall once again for a trade deal.

The trade fanatics say everything will be different under the TPP – even though it is based on deals like the North American Free Trade Agreement (NAFTA) that lured American factories across the border, destroyed good-paying jobs and devastated communities. They plead: “Just come back for one more deal and see how great it will be this time!” And, like all batterers, they say: “Sorry about the terrible past; trust me about the future.”

This is trade abuse. 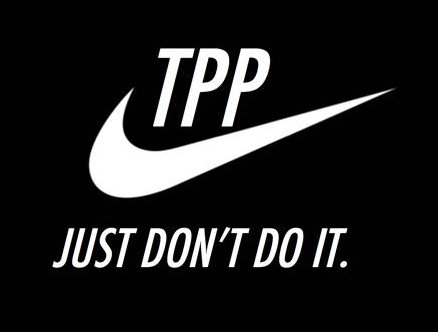 CEO Mark Parker promised that the TPP would miraculously prompt Nike, the brand that is the icon for shipping production overseas, to create 10,000 U.S. manufacturing and engineering jobs – over a decade, that is. Not only that, Parker pronounced, the TPP will generate thousands of construction jobs and as many as 40,000 indirect positions with suppliers and service companies – again, over a decade.

Now those are some great-sounding promises! Nike employs 26,000 American workers now, a few of whom make soles in Oregon and Missouri. But presto, Parker says, the TPP will increase that number by nearly 40 percent!

The thing is, Nike could easily create 10,000 manufacturing and engineering jobs in the United States right now. No TPP required. It employs 1 million overseas, the vast majority in low-wage, high-worker-abuse countries like Vietnam, China and Indonesia. To bring 1 percent of those jobs – 10,000 – to the United States doesn’t seem like such a Herculean, TPP-requiring task, especially considering Nike’s massive profit margin.

The average cost to make a pair of Nike shoes is $30. The American sneaker consumer, who may pay $130 to swoosh, is certainly not getting the benefit of low prices from Nike’s cheap overseas production.

Instead of manufacturing in America, Nike chooses to “just do it” in countries where it knows workers are abused. In the 1990s, the media slammed the corporation for sweatshop conditions in its foreign factories. Like a typical abuser, Nike promised to reform its ways. It said in a news release last week, “Our past lessons have fundamentally changed the way we do business.”

Well, not really. The company admitted in 2011 that two Indonesian factories making its shoes subjected workers to “serious and egregious” physical and verbal abuse. Nike told the San Francisco Chronicle then that there was “little it could do to stop” the cruelty.

Last week, the world’s largest athletic gear maker said, “Nike fully supports the inclusion of strong labor provisions (in the TPP) because we believe that will drive higher industry standards and create economic growth that benefits everyone.”

Promises, promises. Why doesn’t Nike simply insist on higher standards at its factories? What exactly is there in a trade deal with 11 Pacific Rim nations that is essential to Nike establishing higher standards and stopping the abuse of workers in factories making its shoes?

Oh, yeah, the American middle class, which has suffered most from past trade deals, is not allowed to know that. The TPP is secret. Well, except to the privileged corporate CEOs who helped write the thing.

In pushing for “Fast Track” authority to shove the deal through a Congress that has abdicated its Constitutional responsibility to oversee foreign trade, President Obama admitted “past deals did not always live up to the hype.”

Just three years ago, trade fanatics promised that the Korean deal, called KORUS, would definitely provide more exports and more jobs. Instead, U.S. goods exports to Korea dropped 6 percent, while imports from Korea surged 19 percent. So the U.S. goods trade deficit with Korea swelled 104 percent. That means the loss of 93,000 America jobs in just the first three years of KORUS.

It’s the same story with the other trade deals that followed NAFTA, including the agreements that enabled China to enter the World Trade Organization. The Commerce Department announced just last week the largest monthly expansion in the trade deficit in 19 years. The deficit with China for March was the biggest ever.

What this means is that instead of exporting goods, America is exporting jobs. Foreign workers get the jobs making the stuff Americans buy. And they’re often employed by factories producing products for so-called American corporations like Nike. They’re employed by factories that collapse and kill hundreds. Factories that catch on fire and immolate workers trapped inside. Factories where workers are ill-paid, overworked and slapped when they can’t meet unrealistic production quotas. Factories that pollute grievously.

American workers no longer are willing to engage in this abusive relationship with trade fanatics. They no longer believe the promises of change. They don’t want the federal money TPP fanatics promise them to pay for retraining as underpaid burger flippers after their middle class-supporting factory jobs are shipped overseas. They’re over trade pacts that benefit only multi-national corporations like Nike.