Thomas Friedman's bestseller The World Is Flat highlights the strong forces pushing the world towards a single economic platform. The technology-fueled globalization in the provision of services, and the widespread organization of production processes as global value chains are part of his narrative. The revolutionary potential of services comes out neatly from the persuasive story told in the book.

Yet Friedman himself remarks that the world is not there yet. Indeed, "the world ain't flat" is how Jean-François Arvis, Yann Duval, Ben Shepherd, and Chortip Utoktham begin a recent VoxEU column on trade costs in the developing world. Drivers of Brazilian trucks loaded with soybeans and currently jammed on the road to the Port of Paranagua, as well as hotel owners in Cape Verde complaining about the dire conditions of air transportation to that beautiful part of the world, would certainly agree with that. It's true that information and communication technologies, combined with rising educational levels in parts of the developing world, have spurred the cross-border production of intangible services, while innovations like containerized shipping have reduced transportation costs for physical goods -- see here -- but trade remains hampered by remaining costly-to-cross hills and canyons.

Arvis et al. note that geographical distance, language, and contiguity of borders comprise just part of the trade cost factors, along with the tariffs and non-tariff measures. However, the costs from tariffs in particular have relatively fallen in recent decades. In many countries and sectors, barriers in terms of logistics performance, trade facilitation bottlenecks, and international physical connectivity have become relatively higher. In another recent VoxEU piece, Bernard Hoekman and Selina Jackson note that "improving border management, transport and communications infrastructure services could increase global GDP by up to six times more than removing all import tariffs."

Logistics performance -- costs, delays, and reliability in handling the delivery of goods -- depend on investments in both hardware and "software." In other words, one needs to invest not only in equipment and construction, but also in the acquisition of managerial capabilities. The same applies to international connectivity through regular maritime, air, or terrestrial services. Trade bottlenecks, in turn, stem from border controls and other aspects of the transit system. They all depend substantially on the public policies and rules classified as non-tariff barriers, which raise the cost of cross-border trade.

The World Bank and UNESCAP have implemented a joint data-collection exercise of trade cost measurement over the period of 1995-2010. Strikingly, costs have fallen for all groups of countries but more slowly in low-income countries, and remain inversely related to levels of per capita income (see Chart). This is unfortunate as it means that many developing countries have missed opportunities to participate in the rise of networked production through global and regional value chains, since those chains obviously require a "flattening" of trade transaction costs. For instance, in the latest Economic Premise -- Global Connectivity and Export Performance -- Jean-François Arvis and Ben Shepherd show how positively air transport connectivity correlates with a country's trade in global value chains.

Such findings reinforce our lemma that facilitating trade is facilitating development. Dealing with this agenda is complicated, but it is doable, as outlined by Hoekman and Jackson. The pay-off for developing countries has risen substantially through improving policies and regulations regarding trade costs, and corresponding infrastructure investments. A multilateral effort in that direction would also be extremely welcome. 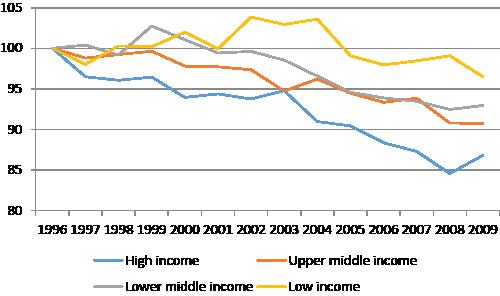 Follow the latest from Otaviano Canuto at twitter.com/OCanuto and keep up with the World Bank's efforts to help countries to end extreme poverty and boost shared prosperity at twitter.com/WBPoverty. For more Economic Premise notes, go to worldbank.org/economicpremise.