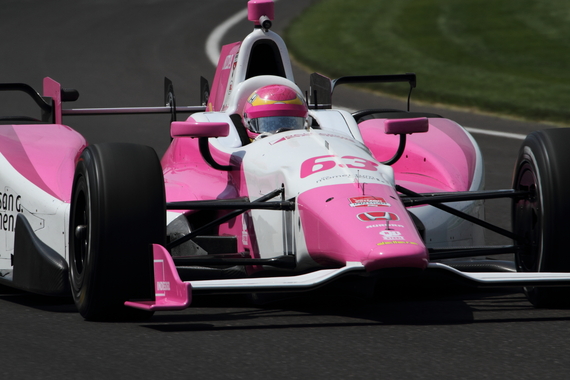 Usually when feel-good stories come out of motorsports it's because a driver did something completely unexpected behind the wheel, or beat the odds to score an underdog victory.

This story is different. But, mostly because there is more than one winner in this race.

Last year, I wrote about Pippa Mann's campaign to help raise awareness for Susan G. Komen by using honest and transparent observations about her own life and challenges on social media. Her candor, combined with the media reach of one of the largest platforms in the world (a little race called the Indianapolis 500), allowed the message of the #PippaGoesPink campaign to reach millions worldwide last Memorial Day.

Far from being disappointed with her 24th place finish in last year's 500 race, the only chance she got to run in the Verizon IndyCar series in 2014, she instead got to planning bigger and better things for her next attempt at "going pink". Only this time, she added a few more friends to help, and invited many more people to join her on the journey.

In this effort, Pippa is using a concept known as crowdfunding. Crowdfunding takes out the middleman in fundraising, and allows causes to take their efforts to directly to the advocates who are likely to care most about them. Fans win because they make easy financial investments that literally empower the causes they believe in. Causes win because they can raise funds more efficiently than they normally do and reach a digital audience through viral and word-of-mouth marketing -- something many struggle to do.

Pippa's crowdfunding efforts this year are made possible by Indiegogo, one of the largest crowdfunding platforms. Her goal is simple -- reach $50,000 in donations for Komen. The opportunity for an IndyCar team was unique -- nothing quite like this had ever really been tried before for a sponsor or partner.

Needless to say, it required a few challenges outside the cockpit as well. For a driver used to barreling into turns at nearly 240 miles per hour without any fear, the scariest thing about all this was hanging up the helmet and embracing digital strategy that would be required to make the campaign work.

I recently had a chance to talk to Pippa about her #GetInvolved campaign, and her new role as a crowdfunding advocate and budding digital marketer.

How did it all get started? 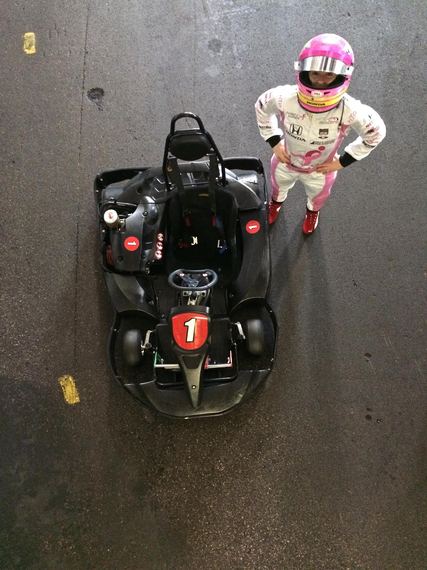 I started reaching out to our vendors who have supplied and donated the perks last winter, and kept them updated as to our build progress along the way.

Some of these perks included:

I also put up for bid my Indy 500 race worn gloves and race suit. (The gloves sold on the first day!)

How is it going so far?

How did Indiegogo help make it possible for you?

Indiegogo allowed us to share progress easily, offer these perks, and create an overall more interactive campaign that we could before. Plus, they look great on the race car, too!

So clearly there was a massive group of people involved in the digital launch?

The out-reach to fans, friends and followers ahead of the campaign was via social media, and then via email, explaining the details of the campaign to them, and asking for their help to spread the word once we launched it. We also ran an early sign up, which gave people advance access, and that proved very successful raising $5,000 before we even opened up the campaign to everyone. I did write the copy myself -- although I had a lot of help with editing once it was there. I wanted to make sure to put the appropriate excitement behind the campaign while mixing with with the respect it was due.

Sending all of this messaging must have been easy.

I took a 10 minute lesson in how to try and HTML code to add live links into the text, and turn the color of the text the appropriate colors for this campaign. Messing with the code makes me VERY nervous after I managed to delete hours of work one day without having it backed up!

Oops. Ok, you must have had someone help you at launch time, right?

The midnight end time required a midnight launch. I was the one who stayed up to see that happen and send the campaign live. I was then also responsible for getting the correct links for the early sign up to people who needed them. I was a little bit paranoid about checking my links many times in the middle of the night in case I made a mistake!

What is the thing you were most surprised by?

When I was doing research on these types of campaigns late last fall, everything I read warned me how much work this was going to be. I guess I should have paid better attention!

What is the one thing you're most excited about in terms of your new understanding of the world of crowdfunding?

It's been incredible to see how many people can come together in support of something they believe in, and what to see succeed. From the friends, vendors, artists, and partners in the racing community who have helped provide us with these perks, to the bloggers, fans and my friends, who are helping support this with stories, social media push-out, and contributing to the campaign. I love that we're able to use this platform to try and do something that's going to help make a difference.

What would be your advice for people who are on the fence about the campaign?

As of this writing, Pippa's campaign has raised nearly $20,000 of her $50,000 goal. The campaign runs through midnight on May 25th. You can get involved at http://www.pippamann.com/getinvolved. Or tweet @PippaMann on Twitter. I'm sure she'd be glad to hear from you.

Because, well, who doesn't love an underdog story -- especially one that helps to make thousands of other underdog stories possible. 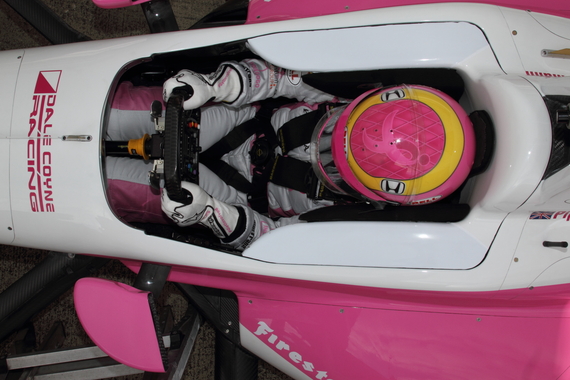