I spent a year first in a cast then crutches and finally a special boot, then I had to do it all over again. 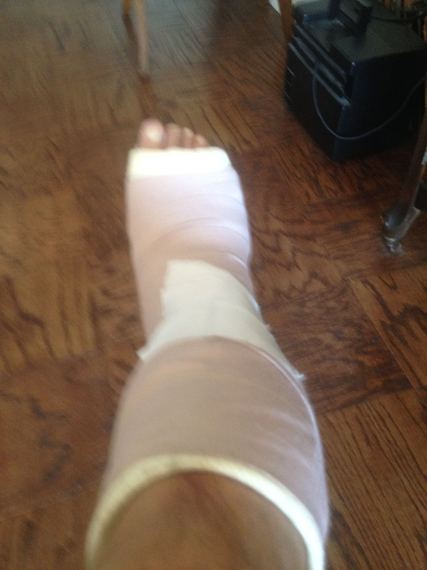 Three days after my first surgery I returned to the gym. I hobbled around, with a knee carefully placed on a bench I would load weights. I could not do squats, but I perfected the one leg push up All was well until I tried to get my pants back on. I had one pair of athletic trousers with a zippers up the side, I got the one leg through and then holding my leg in the air I attempted to push my cast leg through. I heard a voice ask me if I needed help and I insisted I was fine and then a pair of hands appeared in my field of vision. The leg was freed from the trouser trap and I could go out in public fully dressed.

The voice belonged to David Wichs who became my new gym buddy. Every time he saw me, he helped. He got me weights, picked up fallen crutches and we began to get to know each other.

I never judge, so I got him to confess his non kosher sins. The most kosher person I know had non kosher gum once, she still feels guilty. I am not going to tell you what David had, I am not a priest but his family might read this.

He tried to teach me algebra using food vs X and Y, I sorta got it.

Eventually I began to walk, but the first surgery failed and I had to have the second.

He sees me in the locker room standing on crutches and said "I guess I am going to have to start dressing you again.' and we both burst into uncontrolled laughter, the kind that causes tears.

I go through the whole thing over again and David and I become closer. He tells me about his wife, his brother, his desire for a child. I had made a friend.

After I come out of the second boot and am in shoes I saw him in front of Zabars. "Mazel Tov' he bounded over enthusiastically so happy to see me walking. After chatting for a few minutes we parted laughing.

A few days later he was killed by a Crane.

Hey, I warned tragedy was coming.

That's right, it was that David Wichs

I went to the Shiva and talked about David, based on the crowd, I think I was his only Treif friend. I told a few stories and there were a few laughs and smiles. Comedy in the midst of tragedy.

So when I see on the bookshelf a comic novel about a man who had his arm amputated I was immediately drawn.

Ken Pisani wrote Amp'd with a mean sarcastic sense of humor. If you wonder what could be funny about a man losing an arm, read back to my trying to get trousers on.

You gotta approach it all with a sense of humor and a caustic, mean funny novel was just what I needed for my flight back home.

How do you figure it out when you have to live without an arm, or a leg, or a friend or a husband?

How do you go on when a part of you has been Amp'd?

You count fish, feed the alligator in the bathtub, smoke a joint and go to party with your sister. In other words you just do, you just go on.

Ken won't like me calling his book optimistic but it is. Despite it all we all are optimistic. We all think it will get better, maybe, someday, or we just make the best of it today. So be happy, and let's get on with it, for all we know we could all lose an arm, and then you can never learn to juggle.