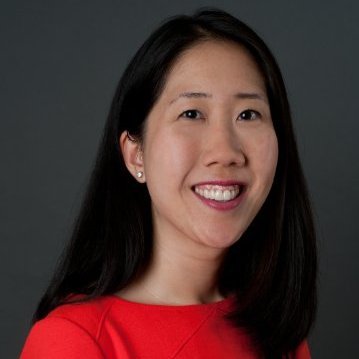 "Does gender hold you back? I don't know -- it's a double-sided coin. I've felt many minor injustices, yet I don't think I can genuinely say I have been held back, as a woman or hit the glass ceiling. Enjoy the ride, not the destination!"

Angela Lee is an educator and entrepreneur who inspires in both the classroom and the investment arena. As Assistant Dean at Columbia Business School, Angela is a highly rated instructor of leadership and innovation. As Founder and CEO of 37 Angels, she evaluates early stage startups and teaches women how to invest in them. In all of her work, Angela is known for demystifying complex topics, curating opportunities, and empowering others.

Angela is a sought-after expert on CNBC, Bloomberg TV, and Fox Business Network and is regularly featured in media outlets such as Huffington Post, Forbes, and Fast Company. Entrepreneur Magazine recognized Angela as one of Six Innovative Women to Watch in 2015, and Alley Watch named her as one of 100 NYC Tech Influencers You Need to Know. Angela holds an MBA from Columbia Business School and a BA in Economics from the University of California at Berkeley.

I don't have one single role model as a leader. I have had many really fantastic role models over my career and I have learned different things from all of them. One example I have particularly learned from is Tamara Bohlig, who was my manager 5 years out of undergrad. When I think of Tamara, I think of balance. She was a senior executive in a financial firm, had 3 children, left work every day at 5:30pm and ran Iron Man triathalons in her spare time! I always looked up to her as somebody who was able to balance many different things. I credit her with going to business school as she was the first person to really encourage me to make that career move. I always think of her very fondly.

For me it's not a single act in particular, it's more a change in my own personal behaviour.

My greatest achievement is that up until I was 25, I thought it was really 'cool' to not try. I didn't really study for my GMATs or go to class for my undergraduate degree and I thought it was cool to be a slacker and not really try. Columbia Business School really changed that for me. I realized that was stupid and that I was leaving a tremendous amount of potential on the table. So I started to try really hard and what that means is that I started to fail a lot more, because I was going after things that people were saying no to me for.

The first time I tried out for a TEDx I was told 'No'. That's what I'm most proud of. It was a mindset shift, from not caring to saying, 'I'm going to try and reach for things, and stumble, and that's ok'. I was really inspired by my classmates and professors at Columbia, though I was really intimidated at first. 2 months in, I realised I hadn't spoken up in class once. So then I did speak up and made a really stupid comment. But guess what - the world didn't collapse! Another example is that I have always loved teaching and a year after graduating from business school, I was working at McKinsey. I had just learned this new advanced analytical skill. I convinced one of my former professors to let me teach it to his class as a guest lecturer. I was 28, walking into an Executive MBA class (where the average age is 35), to teach them something I had learned one month before. And I bombed. They immediately realized that "this girl does not know what she is talking about". I had a good cry afterwards, but I'm so glad I had that experience, because the worst thing that can happen to you as a teacher, happened to me and I'm ok. And it taught me to be hyper prepared before I teach anything. Now I like running experiments and recognising that the world doesn't end when you fail!

I would call it 'death by 1000 paper cuts'; an accumulation of many small things I noticed that happened, because of my gender.

When I was working at McKinsey, we had a class of associates and it was me and 17 guys in my department. That both helped and hurt me. On the one hand, it was awkward at times and it felt uncomfortable speaking up, but at the same time, I was very visible. Later, I remember walking into a room as the Project Manager, and everyone assumed I was the new analyst on the team. Another example is when I had a male co-founder at one of my startups. We would both walk into a meeting, and the male client would end up having a one to one a conversation with my male co-founder. I don't think it was purposeful, rather he wanted to talk to the decision-maker and in the client's mind, clearly that was the man. I also get a lot of "wow, you are a lot less shy than I thought!" I guess I break the stereotype of Asian women being quiet.

Fun fact for you: when you force someone to overcome an existing bias, it actually lights up the same region of the brain as when someone feels pain. In other words, when I surprise someone by acting different than they expect, it's like I'm gently jabbing them in the side. But I guess that make me memorable?

So the million dollar question is: Does gender hold you back? I don't know - it's a double-sided coin. I've felt many minor injustices, yet I don't think I can genuinely say I have been held back, as a woman or hit the glass ceiling.

I grow people the same way at both Columbia and 37 Angels. The first thing I try to do is recognize that success means different very things to different people. I love working very hard with constant new challenges, but some people want to work 40 hours a week with a lot of stability.

That being said, the right ratio is different for each person. I'm very transparent. I have monthly 1:1's and bi-annual reviews and ask the person directly ' what does success mean to you? And I give them different scenarios to suit that person e.g. 50% repeatable work, 20% special projects, and ask them how does that make them feel? I have managed 40 people to date and I am very proud that anybody I've ever managed, I am still in close contact with and they would work for me again. Many of them have worked for me at one startup and worked for me many years later at another startup. I am also very big on career development and progression and realize that sometimes that is with a different organization. I'm very proud when my employees tell me when they are about to do a job search and I always try to help them develop, even if it's not within my team.

I would like to care less about what others think about me. People are often surprised about how neurotic I can be. I lay in bed awake at night and replay conversations over and over in my head. It's a double-edged sword, because it makes me very conscientious, but I wish I could dial it down a bit.

What I have noticed over the years, is that men are less apologetic than women are, whether it's when firing someone or when making a decision at work. I also find that men are quicker to respond to opportunties. I am in a position where I hire a lot of people on a frequent basis and get a lot of resume/cover letter submissions. I notice that the men apply quicker. I don't know why and I'd like to do more research on the root cause. But there is definitely an impact to that speed of response.

I am empathetic and open, transparent and developmental. I'm a teacher and want people to be developing and growing.

I would tell myself 2 things:

1) Other people don't care nearly as much as you think they do!
2) Relax! I tend to be a bit high strung. I would tell myself that it's OK and it will work itself out and if it doesn't, that's ok too.

I had a 25 year plan and not surprisingly, none of the things on that list have gone according to plan!