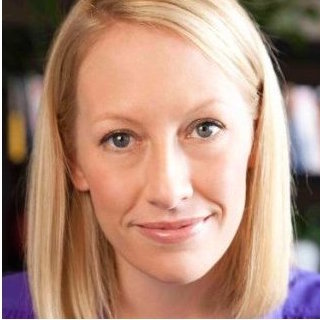 "I would be less fearful in general. Now I can see it, but in the beginning I don't think I knew that I was inhibiting my own growth or the company's growth because of fear - fear of failure, fear of mistakes, general fear. It's honestly one of the biggest blockers in humanity and if you can elevate yourself out of being driven by fear, it's so incredibly life-changing and transformative."

Julia Hartz hopes to inspire people to live more by building the world's largest marketplace of live experiences. Since founding Eventbrite in 2006 with Kevin Hartz and Renaud Visage, the company has generated over $3 billion in gross ticket sales, with more than 200 million tickets processed to events and experiences around the globe. A key to this growth and success is the people of Eventbrite (fondly referred to as The Britelings), which has grown to over 500 employees in eight offices around the world.

Julia cultivates and advocates for Eventbrite's award-winning culture (voted "Best Places to Work in the San Francisco Bay Area" five years running). She has been honored as one of Inc.'s 35 under 35 in 2014 and Fortune's Most Powerful Women Entrepreneurs in 2013. Julia is also a frequent speaker on live experiences, consumer trends and entrepreneurship, and has been recently featured in Forbes, Fortune, Bloomberg and Inc. Magazine.

Julia started her career in Hollywood as a development executive at MTV and FX Networks. In our digital age, Julia believes that real-life, human experiences transcend digital endeavors and lead to individual happiness and strong global communities. Julia is living out more than one calling in her lifetime, and is mother to two empowered daughters ready to rule the world.

I don't have just one role model, rather pieces of inspiration from many different entrepreneurs. One of the great things about being an entrepreneur is that it naturally enables you to build a village of advisors and role models. Over the years, Kevin and I have been able to assemble quite a village and I take pieces from each person in that village. There are unsuspecting role models like Sean Moriarty, ex-CEO of Ticketmaster, one of our greatest advisors and supporters who is now on our Board of Directors. I never would have thought that the ex-CEO of Ticketmaster would have been a role model for me and he has been a tremendous champion. I also look to Kevin for a lot of guidance and advice and he has been an amazing mentor me, literally sitting side by side for the last 9 years.

There are women around me who inspire me every day with their fierceness and fearlessness, like Ali Pincus (One Kings Lane) and Ruzwana Bashir (peek.com).

« It's about always being open to finding pieces in people that are admirable, that you want to take with you. It's a little bit dangerous to say 'this is my one mentor, or my one role model' because nobody is perfect and you don't want to deify someone and then later be let down. »

If I were to think of myself as a role model, I would say that it's really important to realize when you are a role model and to be willing to give advice, share how you do things. I call them 'life hacks' and I think Ali Pincus is a life hack ninja who is open in her giving of advice and sharing of ideas. It's also really important to stay grounded.

I would say the three things I have birthed into the world, a company and two people: Eventbrite, and my two daughters. I also think that being successful co-founders, partners and married is something that Kevin and I are tremendously proud of. We are humbled that we can still work together. I want to give that achievement the recognition that it's worth.

« Honestly, I think it has been confidence. I truly believe there is this confidence gap, at least for me. You have to 'manipulate' yourself to get over it and I do think it has something to do with being a female. If you live in fear or doubt and have that confidence gap, you are simply not going to achieve your full potential and what you know you can achieve. »

Sharon Vosmek from Astia said, "You are at the ready, be at the ready," and I love that because I think it so symbolizes how to put confidence into action. I'd say that has been my biggest challenge, finding my own way and having confidence in the fact that I can create value and drive impact in the company - that I actually have a purpose for being there.

What, in your opinion, is the key to Eventbrite's success ?

« I think the key to Eventbrite's success has really been rooted in our love for the customer. We have always put the customer first and have been driven by the desire to make customers feel a certain way. If I had to sum it up in one emotion, it's 'delighted'. »

Whether it's an organizer who is setting up an event for the first time and is delighted by the fact that they can do it in 3 minutes, or it's a consumer looking for something to do on a Thursday night and finds an amazing event just around the corner that they may never have otherwise found. Those moments and touch points of delight are so important to us and are truly what has led to our success.

The second thing is on the 'Britelings', internal people side, caring about how we make them feel. These are two analogies of customer and employee that come together and what you have in common is that if you truly honor how you make them feel, you'll find there is this delight and engagement, especially on the employee side.

I would be less fearful in general. Now I can see it, but in the beginning I don't think I knew that I was inhibiting my own growth or the company's growth because of fear - fear of failure, fear of mistakes, general fear. It's honestly one of the biggest blockers in humanity and if you can elevate yourself out of being driven by fear, it's so incredibly life-changing and transformative. I'm not there yet and don't know many people who are totally devoid of fear. It's one of the most effective things I've done to really take myself to the next level. A lot of this happens with age. When I turned 30, a lot of crazy things started to happen! I do think that reducing your fear is incremental, happens over time and needs to be consistent.

I think I lead with empathy and connection to our people. I find that the most effective leadership style for me is to just talk and listen. It sounds simple but it's so effective. It takes time and is not easy. You don't always feel like you are getting from point A to point B quickly - I've felt that time and again. The most effective tool in my leadership toolkit is to sit down and have those conversations with people.

« My main advice to entrepreneurs is to find partners. Going at it alone is unnecessary. Not any one entrepreneur can have every skillset it takes to start a successful company. »

It's so important to find a partner you can lean on, test ideas out with, who can keep you grounded and real, pick you up when you fall. A person with complementary skills to you. We were introduced to Renaud through a colleague of Kevin's second company, who had worked with Renaud and vouched for him. It was a stroke of luck that it worked out beautifully.

One way to find the right partner is to work with them in small increments, on a project together, not make a huge commitment right away or 'get married' the minute you meet. That is really helpful to see if you are truly compatible. Then, be honest with yourselves that most of the time it doesn't work out and be real with that. Kevin and I were entirely real about what would happen if it didn't work out. You have to have that nuclear exit strategy/disaster scenario plan.

« I'd tell myself that evolution is part of the journey and not be so afraid to change course or evolve. »

That is honestly one of the most important things to do. You have to be observant of your surroundings and keenly observational of your users behavior in order to make those evolutions.

I'd certainly love to still be at Eventbrite. I envision Kevin and I operating this company for many years and remaining in the day to day running of it. I think Eventbrite has an amazing opportunity to become the world's first global marketplace for live experiences. We have worked very hard on building inventory - we had wellover a million events on the platform last year that were actively ticketed and attended. It's a phenomenal opportunity to pair the millions of consumers who buy tickets on Eventbrite with these events. In 5 years I'd love us to stand alone as the de-facto marketplace for what to do.