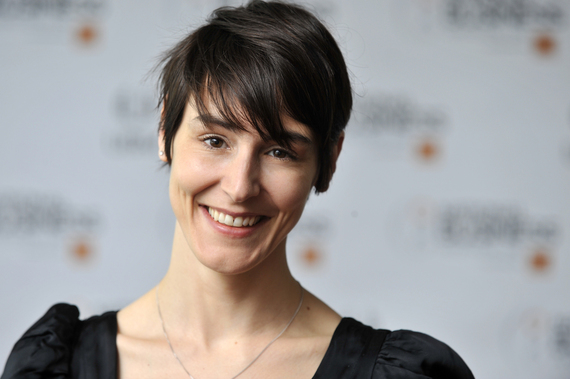 I think there's too much emphasis placed on women's personalities and too much judging of women full stop. Nobody ever talks about the guy saying "Oh they're too bossy or they're too nice" -- it's just a non-issue! We aren't being judged in the same way.

Sarah Wood is Co-founder and COO of video ad tech company, Unruly, where she ensures that the company delivers the most awesome social video campaigns on the planet.

Sarah has been voted UK Female Entrepreneur of the Year by the Growing Business Awards, one of 15 Women to Watch in Tech by Inc., one of 10 London-Based Entrepreneurs to Watch by Forbes, Digital Woman of the Year by RED Magazine, and a Rising Star in Computer Weekly's Most Influential Women in UK IT. Sarah is an Associate Lecturer at the University of Cambridge, where she teaches an MPhil course in "Mash-Ups, Memes and LOLitics: Online Video Culture and the Screen Media Revolution". She has been a member of Social Media Week's Global Advisory Board since 2011 and is part of the Gazelle Group of Entrepreneurs, helping to foster a new generation of entrepreneurs. Sarah was recently named one of the 50 Most Inspiring European Women in Tech by Inspiring Fifty. When she's not working, Sarah spends way too much time on the Unruly Viral Video Chart, watching clips of kittens with her kids.

Scott Button and Matt Cooke -- my cofounders. I learn from them every day. They are incredibly thoughtful, dedicated, strategic, patient and are the most wonderful cofounders to work with. I would trust them with my life. We are a very tight knit team, and that's incredibly helpful because you need to trust your cofounders -- it's so important. I see so many startups coming unravelled because of breaches of trust.

My other role model is Joanna Shields. Joanna is someone I am lucky enough to come into contact with frequently. She was the CEO of Tech City, is now the Chair and previously had roles at Facebook and Google. She is someone who is both very practical but also visionary and incredibly helpful, supportive and encouraging. She's someone I can call up if I have a problem. I know she'll help me figure it out, or be able to point me to the person who will be able to help me figure it out.

What has been your greatest achievement to date?

I'm most proud of the extent of our international expansion. Over half of our revenues come from overseas, our U.S. growth, our European growth.

The British Government recently launched the International Festival for Business in Liverpool. The Prime Minister lead this largest business event for 6 years in the UK. It's all about accelerating exports, growing the economy and growing British exports. I'm always really proud when I feel that Unruly is not only performing well in the UK, but also winning on the global stage.

The biggest one that I'm aware of, and I think it's a problem for lots of women in leadership roles, is that we worry too much about external perceptions.

We're either perceived to be too nice or too bossy, or both at the same time, in irrational, illogical ways. One person will say "oh it's because you're too nice obviously" and then the next will say "Well if you weren't so bossy and didn't come down so hard on people" -- hang on a minute, I can't be both of these things!

I think there's too much emphasis placed on women's personalities and too much judging of women full stop. Nobody ever talks about the guy saying "Oh they're too bossy or they're too nice" -- it's just a non-issue! We aren't being judged in the same way. There are many extra layers of judgement that are applied to women that aren't applied to men -- looks, being another one. It's not enough to be smart, driven, successful, people also expect you to look fantastic. So, all these additional layers of expectation can wear you down if you let them. We all can just choose not to respond to that, and not to care about those judgements and layers of perception.

What do you think is key to your company's success?

Unique data, the best technology in the market, and our mission which is to "deliver the most awesome social video campaigns on the planet." Repeat business has been a huge part of our success. 82 percent of our business is repeat business. Every time we run an awesome campaign, like the Dove Real Beauty sketches which is the most viewed ad ever. Or the Castrol Gymkhana ad that is the most successful sponsors ad for this year's world cup. Every time we run one of those campaigns, it gives me a huge kick! It feels like an amazing achievement.

If you could do one thing differently, what would it be?

I don't think there's anything I would do differently! I think it's important to be yourself. I make plenty of mistakes and I'm trying to learn from them. I'm sure there are better ways to do things, so I listen to other people to see what they might do the next time. I am who I am. On days when I wish I were a bit savvier, smarter, more strategic, I always take comfort from Oscar Wilde who said, "Be yourself, everyone else is taken." I think that point is key. I don't like dwelling on what's not gone well.

I just like thinking about how I'm going to be better, learn everything -- and just be myself. Be the best version of myself that I can be today.

What key tip do you have for how women can manage their work-life integration successfully?

First of all, I wouldn't talk about work-life balance because that suggests that work is opposed to life. Actually, I think we all owe it to ourselves to be working in jobs we absolutely love, that are our vocation. I've always been a big believer in the idea of vocation. If you're following your vocation, then that is your life. So I would say it's more about work-home integration.

One thing that has worked for me is to break down the divisions between home life and work life. I'm not sure it works for everyone, but it has worked for me. I bring my children to the office a lot, my children come to work events, and the people who come to our home are often from Unruly. What this means is I can be me at home and me in the office, there is no inconsistency. With respect to the notion that you have to put on a mask and have a particular professional version of yourself in the office, that doesn't work for me. I like to feel natural and authentic and that means being the same person at home as I am in the office.

My tip would be to do what's right for you, and make sure you have a support network in place. That's really crucial.

Whether it's cleaners, housekeepers, babysitters, supportive partners. Make choices that are going to help you with your self-realisation. There's no point going to work for a company if it's not going to give you decent maternity leave and where there are no women in the boardroom. It's about choosing. Choose the right company where you're going to be nurtured and developed, choose the right husband or life partner who can support you in your choices. Choose wisely.

I think people need to make their own decisions. It's not the right course for everybody. You need to be incredibly driven, committed and I don't think everybody would enjoy being an entrepreneur. I wouldn't actively encourage someone to be an entrepreneur. If someone was interested, I'd be happy to talk to them about it, but it's a very specific life choice so I wouldn't encourage someone to do it if it wasn't something they were already interested in.

It's about energy, passion and encouragement. At the company, our secret weapon is our team. We have awesome technology, unique data, but the real competitive advantage comes from having a winning team. As the leader, it's all about encouraging that team, making sure they feel energised and that they feel passionate about what they're doing.

The best advice I ever had was someone who told me that advice was overrated! I think that's true! It's good to listen to what other people say, but ultimately you have to make the call for yourself and have the courage of your own convictions. The other piece of advice that I've had, which I still bring to mind frequently, came the last night before my final exams at college. I was absolutely terrified and my university professor gave me a hand-written note and it just said "Courage!"

I always try to have courage and remember that note. We all have courage in us, it's bringing it out that sometimes is the hard part.

What do you want to achieve in the next five years?

5 years ago, the 5 of us sat in a room with a leaky roof. So, thinking forward five years, I'd like us to be really dominating the global marketplace. We're sitting at the intersection of the fastest growing trend in online advertising. Digital video advertising spend is growing very rapidly, from $8 billion last year, it's going to be up to $22.5 billion globally by 2017, so we're going to take advantage of that growth to really drive the company forward.

Follow Anne Ravanona> at @anneravanona, and check out other interviews in the Trailblazing women series on Global Invest Her blog