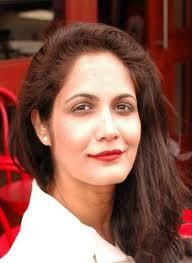 Sarayu Srinivasan is the Founder & CEO of Kaargo, an online consumer shipping and logistics marketplace. She is also a Visiting Scholar at the University of Edinburgh in Scotland. Prior to founding Kaargo, Sarayu was a venture capitalist, most recently with Intel Capital, investing in stage and sector agnostic technology businesses globally. Prior to her investing career, Sarayu held C-suite roles at several successful young software companies and began her career as a brand manager at Pepsi. Sarayu serves on several Boards/AdvisoryBoards, frequently speaks and guest lectures on investing and entrepreneurship, and has published a range of academic and practitioner's business literature. Sarayu earned a BA in Architecture from Barnard College/Columbia University, a Certificate in Medieval Studies from Cambridge University, an MBA from Ecole Nationale des Ponts et Chaussees and held a research fellowship at the Harvard Business School pre-PhD.

Elon Musk. Likely more for what he's tackled and accomplished vs. a specific leadership style. Here's a guy who didn't seem to have the professional, educational or even cultural background to transform heavy American industry. Or industries, to be precise. In fact, he's not even American. Yet this unlikely candidate is transforming some of our most complex, entrenched heavy manufacturing/engineering based businesses in the process of addressing significant global problems. These aren't psychically and physically light facile consumer internet plays like Zip2 or Paypal (which he also founded) but massively complex, industrial, hard asset based industries that have a societal impact. The challenges are substantive. I also find his reasoning and processing resonant and compelling personally and professionally. For instance, he shares that once he calculated it was possible to live on a dollar a day his fear of striking out on his own and surviving vanished which freed him to pursue solutions to the problems he was interested in.

"As a venture capitalist this is the kind of thinking, passion, drive and focus that is deeply resonant with me and that I hope to see in entrepreneurs. Some of my other role models include entrepreneurs I have had the privilege of investing in; their drive, optimism and resourcefulness in the face of tremendous, unimaginable odds is admirable,inspiring and humbling."

I forget accomplishments almost immediately. I always draw a blank when asked! I've never been one to savor achievement or sit on laurels but have often wished I could identify and recall those moments more readily to remind myself of how far I've come or as inspirational fuel for the next step, but the truth is I'm always at a loss when questioned and generally already absorbed in the next challenge almost immediately. But for the sake of playing along, perhaps one achievement might be striking out as an entrepreneur on my own. Raising money might be another. Moving continents to a challenging emerging market alone and then living (and thriving) there may be another. I wouldn't characterize these as my greatest achievements but they were significant challenges that I had to overcome and did.

I've never thought something happened or didn't due to being a woman. I came from a very progressive home where my Mother had grown up in an environment that was progressive for women and was a first in many fields including being one of the first women in finance in the US so I wasn't raised to think about gender issues; its just wasn't a part of my upbringing nor in my DNA.

"I am more sensitive to the advantages of being a woman in business if anything. That said, of course, you can't live today in the US without internalizing the gender debate, so perhaps one potential challenge I have faced as a female founder in a male dominated industry is on the funding front. Its been suggested (by other women investors and entrepreneurs) that fundraising may have progressed more quickly had I been a man."

While I'm not sure I believe that 100% I admit it may be a blind spot as it's certainly a complaint I hear from almost all female entrepreneurs I encounter. On the other hand, I also raised some of my rounds incredibly fast-faster than many men I know.

What in your opinion, is the key to your success?

We know much about our market but we also know what we don't know. We know there is a very large market opportunity and have built a product that we think is useful and hopefully delights consumers. We have a dedicated and passionate team, and a solid roadmap. In general, I believe we are addressing the market in an innovative, deeply thoughtful way. I think we also get that the journey is part of the success story so we pay attention to that piece too. For my part, I, also encourage my team to seek out negative feedback as much as possible. I think this is critical to success.

Perhaps to move even more quickly on some fronts. (I'm pretty sure my team will see this and wince because I'm always pushing for things to have been done yesterday).

"For one example, letting someone go once you've developed a personal relationship it could be something that you don't move fast enough on. But one must. Especially with startups, you could have a good employee but if the timing is wrong so is the employee."

I wouldn't. Not everyone is cut out to be an entrepreneur so I wouldn't encourage everyone to start a business. I think it's just as important to know that. In my experience, it takes a certain personality and mindset to be an entrepreneur: perseverance, drive and the ability to cope with titanic setbacks and overwhelming negativity is mandatory. You need incredible stamina. Further, contradictory traits like the ability to solicit and listen to negative feedback as well as sort out what is valid and act on it are critical as are resilience, tenacity, discrimination and stamina. And you have to be willing to sacrifice.

"You almost have to thrive in or be able to at least survive massive adversity. If you're not ready to get beaten badly, its probably best not to get into the ring."

I tend to have high standards and expect a lot from my team, but I expect more from myself. I've had more than one former employer point out that I'm incredibly hard on myself. So I guess I often hold people to the standard I hold myself which is not always advisable but I realize it and at minimum encourage our team to stretch themselves and grow as much as they can. That said, I care very deeply about the people that work with me; there is a sense of responsibility and friendship there too - they are family in many ways. I also tend to want things to get done incredibly fast for a number of reasons. I'm impatient that people won't (or can't) move as fast as we should.

To take even bigger risks, earlier. I had the opportunity to start or join multiple ventures over the years that if I had joined, would have been very successful outcomes. They entailed massive risk and massive unknowns at the time. But I didn't join. That said, it was less fear and more a lack of passion around the particular opportunities so I can't be too hard on myself here but still, I could have taken even larger risks than I eventually did.

"Another thing I might advise myself is to truly internalize not take things personally. Sometimes people's behavior and actions leave much to be desired and/or doesn't come from a great place but its important to realize that very often it has nothing to personally do with you. You may represent an archetype that is disturbing for them, you may stand in the way of something they want, you may pose a threat or competition and that drives behavior that, well, perhaps let's say you would not engage in. But in most cases it really has little to do with you and even if it does, not taking it personally makes it easier to deal with and overcome."

I'd like to see that we have a significant chunk of market share and we are a market leader. We've been one of the earliest thinkers and innovators in-market and have an environmental and social agenda around our business as well as a good idea of what we'd like to perpetuate so we should set the gold standard. We'd like to be the marketplace of choice for consumer shipping and logistics.

3 quotes that capture my operating principles and personality well.

- "Aut inveniam viam aut faciam" (I shall either find a way or make one), Hannibal
- "The reasonable man adapts himself to the world: the unreasonable one persists in trying to adapt the world to himself. Therefore all progress depends on the unreasonable man." George Bernard Shaw
- "Don't be encumbered by history, go off and do something wonderful." Bob Noyce, Intel Founder