Judd Apatow's Trainwreck doesn't truly merit its title until this comic venture totally goes off the blasted tracks in its final quarter. What starts out as a hilarious consideration of modern mating rituals, sort of a distaff take on Apatow's earlier comedies (e.g. 40-Year-Old Virgin; Knocked Up), winds up as a queasy quantum leap backwards into the pages of Marabel Morgan's 1973 multimillion bestseller, The Total Woman:

"One of your husband's most basic needs is for you to be physically attractive to him. He loves your body; in fact, he literally craves it . . . .

"Many a husband rushes off to work leaving his wife slumped over a cup of coffee in her grubby undies. His once sexy bride is now wrapped in rollers and smells like bacon and eggs. All day long he's surrounded at the office by dazzling secretaries who emit clouds of perfume.

"This is all your husband asks from you. He wants the girl of his dreams to be feminine, soft, and touchable when he comes home. That's his need. If you are dumpy, stringy, or exhausted, he's sorry he came. That first look tells him your nerves are shot, his dinner is probably shot, and you'd both like to shoot the kids. It's a bad scene. Is it any wonder so many men come home late, if at all? . . ."

Similar in spirit, Trainwreck is about how Amy (Amy Schumer), a cynical magazine writer, after first coldshouldering him, tries to win over Aaron (Bill Hader), a sweet sports doctor, by trying to become his Total Woman. The winning strategy: don a cheerleader's outfit and do splits for him. Before this capitulation to his male needs, she is a feisty, take-the-bull-by-the-horns, politely racist, alcoholic, drug-taking, bisexual serial copulater working for a magazine that publishes articles on the effects of eating garlic on the taste of semen. 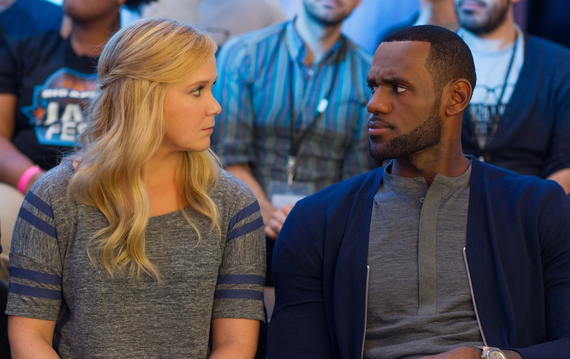 Amy (AMY SCHUMER), who has no black friends, starts dating a man who has many, including LEBRON JAMES, starring as himself.
Photo Credit: Universal Pictures

Well, that doesn't sound women's libby either. So where is the Schumer that Vox.com's Alex Abad-Santos noted has been "hailed as a groundbreaking feminist, a smart voice on women's issues, and someone who oozes subtle brilliance"?

Yes, where is the Schumer who at the Gloria Awards and Gala, hosted by the Ms. Foundation for Women, insisted: "I am a woman with thoughts and questions and shit to say. I say if I'm beautiful. I say if I'm strong. You will not determine my story -- I will. I will speak and share and fuck and love and I will never apologize to the frightened millions who resent that they never had it in them to do it. I stand here and I am amazing, for you. Not because of you. I am not who I sleep with. I am not my weight. I am not my mother. I am myself. And I am all of you, and I thank you."

She's not there in Trainwreck.

Yet this comedy is often so deliriously entertaining and so deftly constructed, you won't realize for a time that one of America's favorite, new, politically astute comics is having her values derailed. The opening scene, an instant classic, has Amy's dad Gordon (Colin Quinn, superb for the first time in his career) lecturing on the tediousness of monogamy and why he is divorcing their mom to a young Amy and her sister who's hugging her plaything: "What if I told you that is the only doll you're going to play with for the rest of your life?" 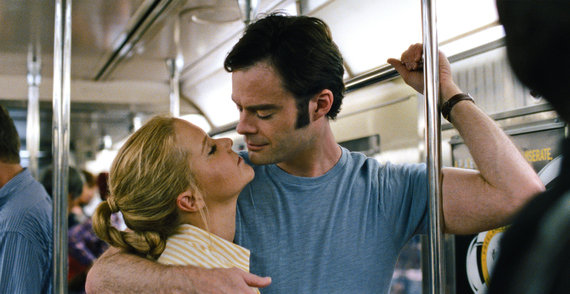 Jump ahead a decade or so and it is clearly observable that Amy has taken Pop's advice too much to heart. She can't commit and refuses to. She's an uncontrollable serial schtuper who goes to bed even with dudes residing in Staten Island. This causes her lovesick, possibly gay, muscleman/steady lover, Steven (a not-to-be-forgotten John Cena), to be left heartbroken when he learns the woman he desires to marry suffers from satyr-on-the-brain.

Oh, no! A rejected Amy quickly realizes one is the loneliest number. But can she start liking sports, rah-rah like a Dallas cheerleader, and do a Carol Brady impression full time to win love ever after? Of course, she can.

Yes, beginning as a Lenny Bruce routine, Trainwreck ends up as a Harlequin Romance.

Fem-politics aside, Schumer is clearly now positioned to be a top-tier film star. When Amy goes for the laughs, she succeeds 90 percent of the time, and when she becomes wounded, you empathize. One only wishes her addictive radicalness on TV could have been transferred to the big screen without the need for any soft-pedaling. 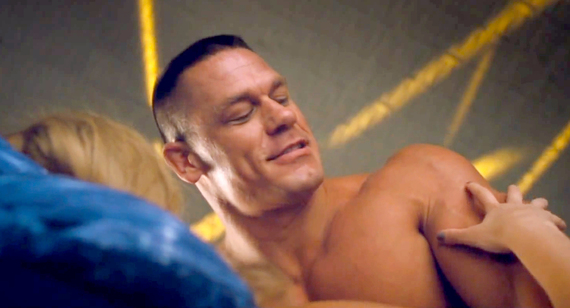 Steve (JOHN CENA) makes love to himself while Amy observes.

Maybe Schumer, who also wrote the screenplay, should read a little Rebecca West: "I myself have never been able to find out precisely what feminism is: I only know that people call me a feminist whenever I express sentiments that differentiate me from a doormat."

Schumer should know by now that being a doormat isn't the only way to a garner a first-rate love, although it might aid you at the box office.