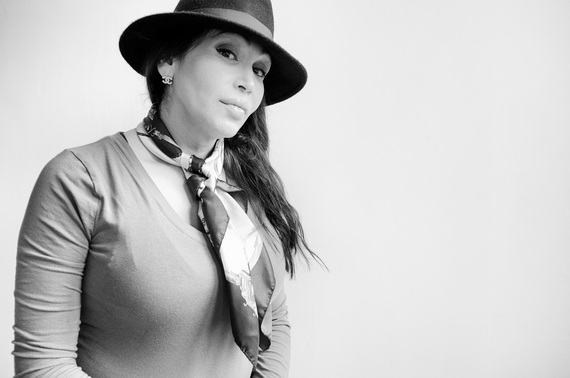 Since leaving Argentina, Cecilia Gentili has embarked on an incredible journey of transformation, ultimately turning her into a widely respected advocate for trans rights in New York City. Currently, she serves as the Trans Health Coordinator for the APICHA Community Health Center, while continuing her work as a mentor and an advocate within her local community in Jackson Heights, Queens. But becoming who she is today has not come without struggle. I had the pleasure of sitting down with Cecilia and hearing first hand how her story has unfolded. Our conversation went something like this:

Daniel Lyons: What was it like for you growing up in Argentina?

Cecilia Gentili: I am from a really small town, and I always knew that I wasn't a boy, but it was really hard for other people to see it. When I was a child, people were getting killed in my country for thinking differently -- it was dangerous. After all the years of having a dictatorship, people like my mom just chose to be quiet. But me, I wasn't quiet. No, I was loud -- so very loud! Laughs. I had to make concessions with everyone in order to survive there.

Did you begin your transition in Argentina?

I did, but it wasn't going anywhere. Transitioning was difficult in a country that was relatively new with democracy at the time. Argentina became very progressive later, but at that time there was still a lot to fight for, and I made a choice not to fight. I felt like it was too much for me, so I left.

So you moved to Miami. What was that like?

It was like Disneyland! It was amazing to me -- I loved it. And I was totally broke. I only knew one person. But I knew that that was the beginning of my final step into becoming who I wanted to become. I moved there around my birthday, and I remember telling a friend that this is the last time I will be celebrating my birthday using my old name. The next birthday I will be Cecilia, from then on.

How long were you in Miami?

I was in Miami for five years. It was great, but it was also difficult. It was full of experiences. I didn't want to become a new person. It was more about changing other people's perceptions of me. I made physical changes and my appearance began to match the way I felt. But Miami is a crazy place -- for many people it represents freedom. But I took freedom to a whole other level. And I don't regret any of it.

Is this where you first connected with a trans community?

No. Well, I had trans friends and everything, but I never felt part of the community. It was very hollow; it was all about being pretty, about clothes and shoes. I mean, it was fun and it was beautiful. But there is no comparison to the community that I am part of now in New York. Don't get me wrong; I still want shoes! But I also want to make a difference, and my community here is rewarding in that way.

So when you moved from Miami to New York, that's when you found a sense of community among other trans women?

Not exactly. When I moved here I kept doing the same kind of thing. I was a very active drug user at the time Essentially I found my community by hitting rock bottom. I was totally broke, with a legal/immigration situation, feeling awful and realizing that drugs had become a problem. It broke me.

I had an immigration case that was very complicated because of my situation. I found a lawyer, but you know lawyers have like no feeling, so they were asking me questions and I was like, "um, that's a little difficult for me to answer!" But he recommended me to find a counselor which is how I ended up at the LGBT center, where I attended a trans group.

It was this community that brought me back to life. I was able to fix my addiction and immigration, and I was able to find another kind of job. This group of trans women who had been through similar things got me back on my feet. I didn't look for my community they found me.

Is this how you became involved in activism?

Yes, definitely. When I saw other trans people who were using their experiences to help others in similar situations, I realized right then that I too wanted to do that.

You have become known as an inspirational group leader, particularly for your group in Queens. How did that group come about?

Years ago, one of my friends said, "You would be perfect for this group of girls in Queens." Even though I started a new job that is very demanding, I still make time for that group because they are very close to my heart. Especially because I don't only identify as a trans person, I also identify as Latina. My reality growing up is very much from the perspective of some one from Latin America. And coming to realize how important that part of my identity is, has had an impact on my work as an activist.

Realizing ones own identity can certainly have a powerful effect on the work of an activist...

As a trans person, do you feel included in the LGBT community?

I feel sometimes that the "T" is not really represented in LGBT. And I understand why. The reality of a transgender person is just so different than the average person. Getting a job, for instance, or even just keeping a job if you want to transition, is a very different reality than if you just want to have sex with the same gender. Finishing school is a lot harder if you're trans. The reality of a trans person is very complex. I don't want to take away from what gay men and women go through, but the "T" has its own unique problems that are not being addressed. And if you happen to be a trans of color, it's even worse.

As a trans activist, what kind of message do you have for the LGBT community at large?

I would tell my gay community that you have a wonderful opportunity now to allow yourself as a community to learn more about the "T" in LGBT. If this is a moment of joy due to victories of marriage equality, it is also a time to be open to learning about the rest of the community. When it comes to the trans community there are a lot of disparities. And since the trans community has been part of the fight for marriage equality, then the "L," the "G," and the "B" should also be part of the fight for trans rights.

We are in a circle that is so hard to break. If you're trans, you are less likely to finish school, and if you don't finish school, its harder to get a job, and if you cant get a job then your more likely to turn to sex work. And for the record, I have nothing against sex work, but I feel that sex work should be a choice, and within that choice there should be rights and protection, but unfortunately the law does not see it that way. As it is, sex work is a very risky practice. All of these things are a chain reaction that I have seen in many girls' lives, and if we are going to make improvements we have to begin with the root causes, which comes from a better understanding of trans reality. People need to know that we are not an enemy. We are just one kind of community.

You have become such an important role model for many of the young trans women that you work with. Hw does that feel?

As a person who is working in services, and as a trans health coordinator, the girls come to me and they say, "Miss Cecilia, do you think I will be able to make it?" And I say, "Your damn right! It's not going to be a piece of cake. You better work for it, and it ain't easy at all. You know why? Because you trans, but you can do anything you want."

Having a platform to carry this message of empowerment has changed my life. You know, work is really hard, and I work a lot, but I might come across a new person, and after a meeting with me I can see them smile and be hopeful -- this is what I live for now. Being able to play a part in someone else's process of empowerment is extremely empowering for myself.

But it's still really hard, because with that I have to whiteness all the terrible things that happen to my community. I see them everyday losing jobs, not getting the same opportunities, being faced with incredible disparities, and it hurts. But when you learn that the trick is to make all that pain become energy to be a factor of change, it's beautiful.