Rapidly shrinking Arctic sea ice is poised to open the region to many more kinds of ocean-going vessels than it has been at any point in modern human history, according to a new study.

This shift could dramatically increase trans-Arctic commerce during at least a few weeks out of the year, even opening up temporary “supra-polar” routes along which moderately ice-strengthened ships could sail directly over the North Pole, slashing days off the travel time between Europe and the Far East.

The study, published on Monday in the journal Proceedings of the National Academy of Sciences, is the first to pair computer model projections of Arctic sea ice during the month of September, when sea ice typically reaches its annual minimum, with projections of future shipping trends.

Laurence C. Smith, the study’s lead author and a professor in the geography department at the University of California Los Angeles, said that even a moderate amount of warming will open the Arctic up to a degree that would have been unthinkable to prior generations of polar explorers, many of whom died trying to find viable sea routes across the Arctic. 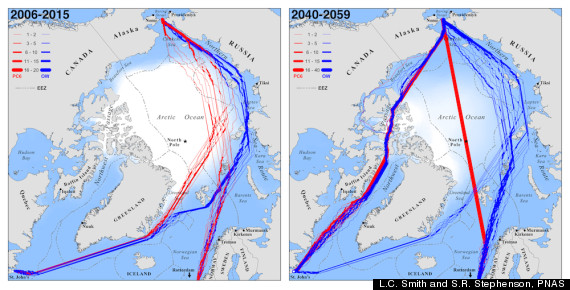 For example, the study found that the Northern Sea Route along the Russian Coast, which is already used by ice-strengthened ships to transport goods between Europe, Russia, and China, is likely to become even more accessible, including to non-ice-hardened vessels, the study found.

According to the study, during the 1979-2005 period, sea ice limited the probability of an open-water transit along the Northern Sea Route to just 15 percent in any given year. The study projects those odds will increase to 94 to 98 percent by 2040-2059, depending on how much the Arctic warms during the period.

Meanwhile, ships that have been modified to withstand encounters with some ice floes may be able to sail straight across the pole, bypassing Russian waters and thereby saving time and money, since Russia currently charges hefty icebreaker escort fees for vessels traversing its Arctic waters.

Currently, only icebreakers are regularly able to make voyages across the Pole. Last summer, the Chinese icebreaker Xuelong, or Snow Dragon, traversed the Northeast Passage, along the coast of Siberia, and then took a shortcut over the North Pole to travel back to China.

If sea ice recedes and thins to a point where icebreakers are no longer necessary to reliably navigate this path, the Central Arctic Shipping Route, that could shave up to 8,000 miles off the journey from Shanghai to Europe, slashing transport costs.

The results don’t necessarily indicate that the Arctic is going to be quickly overrun with shipping and resource development, as some have argued. But they do suggest that as the Arctic continues to warm in response to human activities, people will have unprecedented access to the previously frozen and isolated region.

In 2012, September sea ice extent plummeted to its lowest level since the beginning of satellite records in 1979. The past six years have had the six smallest sea ice extents since 1979, indicating that the ice has not recovered from the previous record low in 2007.

Smith said that whether shipping companies choose to take advantage of shorter Arctic routes during the end of the melt season will depend on a range of factors beyond just sea ice conditions. “It takes more than technical feasibility to make shipping happen,” he said.

A 2009 assessment of Arctic maritime shipping found that the Arctic lacks basic services that are necessary for safe shipping operations, including reliable navigation charts. "A lack of major ports, except for those in northern Norway and northwest Russia, and other critical infrastructure will be significant limitations for future Arctic marine operations," the report said.

Along similar lines, sailing along a supra-polar route might cut the shipping distance involved, but the lack of nearby ports and search and rescue capabilities in the middle of the Arctic Ocean would make the trip far riskier than the routes currently in use today. That would increase liability costs for shippers.

For these reasons and more, Smith does not expect the Arctic to ever replace the Suez and Panama canals, which are the main arteries for global marine transport today. However, a seasonally ice-free Arctic could boost the ability of companies to transport natural resources and goods from northern Europe and Russia to China.

“This is highly significant because it provides a shipping corridor to get those resources to China,” Smith said.

Smith said the study clearly shows the need for an effective governance system to oversee Arctic shipping and set standards to prevent accidents that could damage the fragile ecosystems in the region. “The ice is thinning to the point where it is feasible” for ships to go anywhere, Smith said. “Even the temptation of it in my mind is worrisome because of the sheer numbers of ships that it involves.”

The International Maritime Organization has devised a voluntary safety code for Arctic-going vessels, but Smith said mandatory standards may be needed.