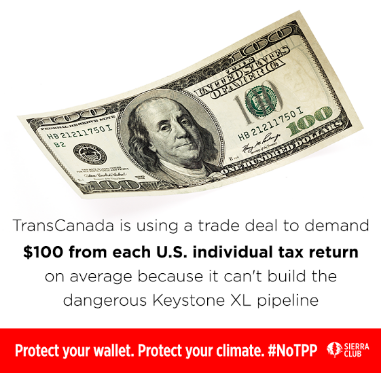 TransCanada, the company behind the infamous Keystone XL pipeline, just demonstrated the dangers that corporate trade pacts pose to communities and to our air, water, and climate.

On June 24, the Canadian oil company filed a trade case against the U.S. seeking more than $15 billion in damages from American taxpayers as compensation for the rejection of the Keystone XL pipeline that spared us the threat of increased climate disruption and spills of dirty tar sands oil.

TransCanada is able to bring this case thanks to rules in the 1994 North American Free Trade Agreement (NAFTA) -- rules that would be expanded in the proposed Trans-Pacific Partnership (TPP) pact -- that give foreign corporations, including big polluters, expansive rights to challenge environmental protections in unaccountable trade tribunals. In fact, TransCanada's case against the U.S. will be heard before a private trade tribunal with no accountability to our domestic legal system.

Here are 4 key pieces of information you should know in order to fully understand the implications of this case.

1) TransCanada's case is not an anomaly. Foreign investors -- including Shell, BP, Chevron, and ExxonMobil -- have already launched nearly 700 of these so-called "investor-state cases" against the policies of more than 100 governments. These cases have challenged for example, a moratorium on fracking in Quebec, a court order to pay for oil pollution in Ecuador, an environmental panel's decision to reject a mining project in Canada, and a decision to phase out nuclear energy in Germany.

And while all sorts of public interest policies are at risk, environmental policies have been a favorite target of corporations. Half of the new investor-state cases in 2014 targeted policies affecting power generation, mining, or oil and gas extraction. In the first five months of this year, mining corporations used private trade and investment tribunals every 2.5 weeks on average to launch, advance, or win cases against mining restrictions in Latin America alone.

2) The Trans-Pacific Partnership could mean an explosion of new cases. While investor-state cases are being used far too often to challenge policies to protect our air, water, and climate, what we've seen so far could be just the tip of the iceberg if the Trans-Pacific Partnership, a new proposed trade agreement, were approved by the U.S. Congress.

The TPP would expand nearly the same exact corporate tribunal system that TransCanada is using more than any past U.S. trade deal, roughly doubling the number of corporations that could follow TransCanada's example and could challenge U.S. climate and environmental safeguards in private tribunals. That includes big polluters like the U.S. subsidiaries of BHP Billiton, one of the world's largest greenhouse gas emitters and one of the U.S.'s largest foreign investors in fracking and offshore drilling.

3. TransCanada's case has implications beyond the KXL pipeline. TransCanada's NAFTA case will not reverse the Keystone XL decision: Keystone is dead, thanks to years of organizing by a diverse and dogged movement. However, the case could put taxpayers--to the tune of $100 per each individual tax return -- on the hook for the Keystone XL rejection.

Equally troubling, however, is the signal that this case may send to our or other governments considering rejection of a dirty fossil fuel project. And, as we noted in our report, Climate Roadblocks, law firms specializing in these cases are now explicitly advising "foreign investors operating in the energy sector" that they could use these tribunals "as a tool to assist lobbying efforts to prevent wrongful regulatory change."

This is another powerful reason why we can't expand this system of corporate rights through the TPP.

4. You can join the growing fight against corporate trade deals. Opposition to the TPP is steadily growing. Last month, more than 450 environmental, landowner, Indigenous rights, and allied organizations sent a letter to Congress warning that pending trade deals like the TPP threaten efforts to keep fossil fuels in the ground.

Passionate activists and diverse partners came together to defeat the Keystone XL pipeline, and we can defeat the Trans-Pacific Partnership - with your help. Take action here to ask your members of Congress to commit to vote no to the TPP, and join the growing movement calling for a new model of trade that puts the health and safety of people before the profits of big corporations that are already polluting our air and water.