Medicare and Medicare are unsustainable due to rising medical expenses. Why is this happening? As management expert W. Edwards Deming explained: "Every system is perfectly designed to achieve the results it gets." Then, is our medical system "perfectly designed" to produce the high and rising health care expenditures, variable quality, too many medical errors, and negative medication side effects? How can we change the system to increase efficiency and decrease costs when the legislative branch of the federal government is gridlocked and almost nonfunctional?

Because chronic stress is a leading driver of high medical expenses, if Medicare and Medicaid started covering the most effective stress-reduction method, the Transcendental Meditation (TM) technique, it may be possible to greatly reduce skyrocketing health care expenditures and rescue these programs without cutting benefits or our raising taxes.

TM Practice: The Biggest Bang for the Buck 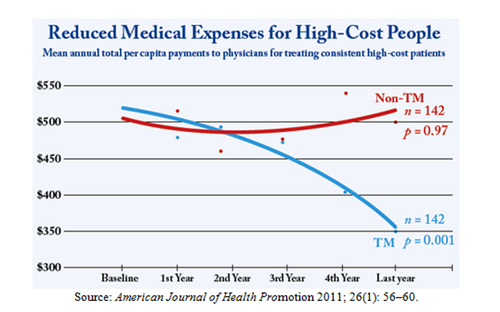 Consistent high-cost people typically have poor health with five or more chronic conditions, which are affected by excessive stress. Chronic stress can weaken the immune system, which can increase vulnerability to most diseases. Stress also degrades other physiological systems. This ongoing damage can cause, aggravate, or contribute to a wide range of physical and mental disorders. Prolonged stress also contributes to the unhealthy lifestyles that cause most chronic conditions, which account for approximately 80 percent of national medical expenditures. Obviously, stress reduction could help reduce high medical costs.

I conducted the study that was published in the American Journal of Health Promotion (2011; 26(1): 56-60). The results indicated that people with consistently high doctors' bills experienced a 28 percent cumulative decrease in physician fees after an average of five years of TM practice. After the first year of meditation, the TM group's physicians' bills declined 11 percent.

In 2009, the highest-spending 5 percent of the population averaged $16,336 or more per person in medical expenses annually. The tuition for starting the life-long TM program is $1,500. If the TM technique were taught to these people and their health care expenses decreased by 11 percent in the first year, then the payback period for TM would be less than one year. Since numerous studies show that the medical expenses of almost all TM practitioners continue to decline for over five years, the savings to Medicare and Medicaid would persist for many years and generate a substantial return on investment.

The distinctive stress-reducing and health-enhancing properties of TM practice have major policy implications. When considering the above study in the context of all the published research on the benefits of TM practice for mental and physical health, it is clear that if the TM program was provided to consistent high-cost people, then it would be possible to leverage great reductions in health care expenditures and thus help save Medicare and Medicaid without the government's cutting benefits, raising taxes, or borrowing money. Just add a TM benefit.