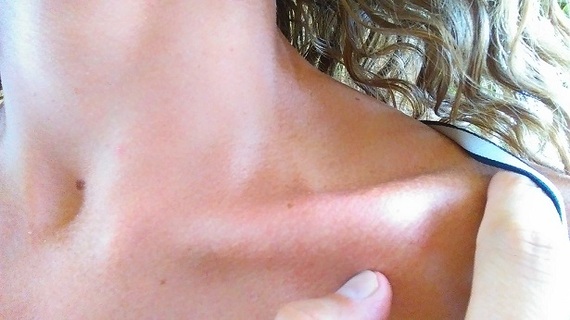 I was not always ape shit for The English Patient. Back in the '90s, when I saw the movie for the first time, I was nothing but criticism. My disdain turned on one scene: the Christmas party when Kristin Scott Thomas pretends to swoon from the heat so that she can get away from the crowd and make love with Ralph Fiennes in an alcove away from everyone. "Fuck that," I told my friends. "It's not hot in Cairo at Christmastime."

Later, amidst a gender transition during my first year of law school, I bumbled home each weekend from Divas, a transgender club in San Francisco, and I put The English Patient on and turned to that Christmastime scene over and over again, and the other scenes in Egypt, too.

To explain why, I must go back to the fourth grade, when I first heard about the concept of a sex change. To me the idea seemed like the most natural thing in the world, though it would be years before I would be able to take the step myself.

What happened was that, as puberty hit, I drowned my gender identity in sex addiction. Anonymous sex provided an avenue for assuming the role in which I was comfortable, while covering up the longings I felt inside, if only for as long as I acted out. Since the sex was over before it began, and I never knew my partners, the underbelly of my gender dissipated upon expression. Thus I sought to suppress myself under the illusion of control.

Acting out succeeded in bottling me up, which only increased the pressurization over time. The male corpus I lived in was throttling me. I became so used to fantasy that I saw no way out until recovery opened the door, first a sliver, and then all the way. Still, a part of me remained shielded in imagination so I could dream of something to live for.

Watching the Egyptian scenes from The English Patient, I yearned to experience such love between a man and a woman myself. Those moments on the TV screen were my conduit to the other side of my sex change. In the coming years, I would put up an online dating profile on Nerve.com, and, along with a quarter of everyone else on the site, I would answer the favorite sex scene question with the Christmas sequence I had once scoffed at. It was all in the calibration of desire with which Ralph Fiennes moves the satin strap of Kristin Scott Thomas's bra over her shoulder.

I wanted to be held as she was held, and touched, by a man, that way.

In the meantime I kept going to Divas.

The club was a discovery from early on in my transition, before I started taking hormones. There, in this low-lit den of iniquity with multiple floors, I could present as female even though I was still living my daily life as male. I felt too self-conscious to be myself anywhere but this world created for transgender people and guys who were interested; once inside, I was free, even if I still felt alone. I was out-of-place as a law student ~~ many other girls there had been forced into prostitution to pay for their transitions, and one time I walked in on two girls smoking crack in the bathroom ~~ but it was better than nothing.

Years later, I drove by Divas during the day and saw a decrepit dive bar that held much of the sadness and isolation that I'd felt shedding skins as I transitioned.

The clarity of retrospect was obscured not just by the compression of time that had yet to expand in a bang, but more so by idealism. My life was, for several months, a castle in the clouds where I danced during the day among law books, through the evening at recovery meetings or at my gender therapist's office over in the East Bay, and then all night at Divas on weekends and sometimes in between.

A decade would pass before I came to understand that I sought to become a lawyer for the same reason I felt drawn to love scenes from The English Patient and the escape of Divas. The life that I was living in these worlds all sprouted from one seed: the night of May 11, 2001, at the Queen Boat, a floating discotheque on the river Nile in Cairo, where I witnessed Egyptian State Security Police arrest 52 men, including a friend I have not seen or heard from since, for the crime of being gay. That incident crystalized a fear pulsing in each heartbeat of mine on earth ~~ life is nasty, brutish, and short, and it may be taken away at any time.

This acceptance yielded a conclusion I no longer wished to escape: nothing was worth an effort unless I could live in freedom as myself.

This blog post is excerpted and adapted from my book There Is Room for You: Tales from a Transgender Defender's Heart.