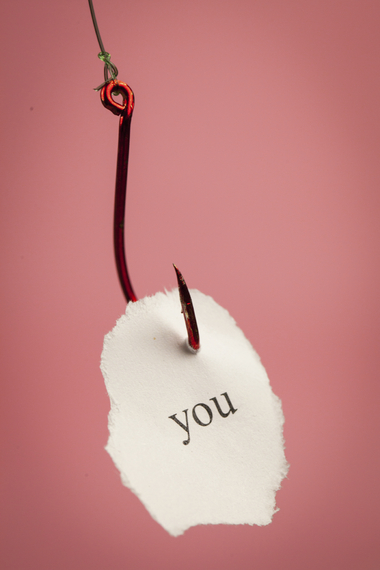 I sat straight up in bed and went over the dream I'd just woken up from. In this dream, I was looking at myself in a mirror. A fish hook was punctured all the way through my left breast. It was a bloody mess, and I found myself fixated on the barb, and the point. I looked myself in the eye and asked out loud, "How am I going to get out of this?" Now awake and in my bed, I suddenly remembered the tiny, pebble sized lump I had felt on my left breast about six weeks earlier and hadn't thought of since. Wondering if it was still there, I reached up to feel my breast.

I made an appointment that day, which unfolded into several appointments of this cascading process. First OBGYN, then ultrasound, then biopsy. The last thing the radiologist said to me after poking through my breast with a needle is, "I'm sure this is nothing, but we've gotta prove it."

I believed him and left his office feeling pretty confident it was nothing as well. Days later I was called back -- into "the little room" -- for my results. Intuitively, my husband asked to come with me and was at my side and as we waited. It suddenly occurred to me that there might actually be a problem. I flashed back to when they told me my father was going to die. They always take you into a little room when they give you bad news. Just as I was feeling a fleet of panic, in came the same doctor who had had before said, it was nothing. We all sat at a little table looking at each other for a few moments.

The doctor spoke first: "Tell me again, how did you find this?" I relayed to him the story of my fish hook dream. He acknowledged me for listening to my body and this sign. He then proceeded to tell me, just five days before my 47th birthday, that I had breast cancer. I suddenly felt as if my Spirit was trying to leave my body while I tried to process this shocking news.

The doctor told me I had a very small but very aggressive cancer. He described it as curable. But my trust in him was not high. He looked me in the eye saying this but I couldn't help feel betrayed because he was the one who said it was nothing. Over the next several days I was whisked into multiple appointments. First an MRI of both breasts, next to a surgeon, a radiation oncologist, and then finally to an oncologist.

The process seemed very mechanical, like I was on a conveyer belt. The surgeon spent all of 15 minutes with me. And after a brief physical examination, she explained -- from the farthest side of the room and in the most generic language -- that she would go in, take out the cancer and I'd be on my way. She asked if I had any questions. I said no. Though now it's clear, I didn't know what I didn't know. In the appointment with the radiation oncologist, he explained that I would be doing seven weeks of whole breast radiation. When I heard the word radiation, I literally felt my energy and Spirit take a step back. He went on to explain the radiation would almost certainly ruin my implant because of the scar tissue that would develop. Not to mention that the radiation would be right over my heart. When I asked if there were other alternatives he said that in my case there were not.

I booked the surgery for 4 weeks later, on the day after I was to deliver a talk to fifty people on how to our thoughts create our reality. This was my first big public speaking engagement and I wanted all my faculties. My husband and the surgeon wanted the surgery right away, but I was calm and centered in the knowing that the most important thing for me was to deliver this talk with clarity. I also couldn't help noticing the brilliant (albeit terrifying) opportunity the universe had presented to me in being able to "walk my talk."

As the days passed, I educated myself on my options, and based what I was facing, I was very seriously leaning toward a mastectomy. I didn't want a deformed breast. I am a young beautiful girl, I want to wear a bikini! I also knew that experiencing heavy dosages of radiation every day for seven weeks wasn't something I wanted to subject my body or my Spirit to.

As synchronicity would have it, I found myself several times in circles where people were talking about second opinions. It didn't even occur to me to get a second opinion because the team of doctors I had met with seemed competent and sure of themselves and the treatment seemed straight forward. Yet, after the third conversation about a second opinion it was clear that the universe was trying to get my attention about this.

He referred me to another surgeon at a different hospital. Off I went to a date with another new doctor. But my husband and I knew right away something was different when they gave me a nice cotton spa robe as opposed to a paper towel wrap around like the other place. Dr. G came in and, sitting knee to knee with us and looking me in the eyes, spent about as much time just saying hello and connecting as the previous surgeon did in our entire meeting. TWO AND A HALF HOURS later she had detailed what cancer was, what type I had, every possible scenario, every rabbit hole, every complication and every option. She also told me about a new technology, an alternative to whole breast radiation, called Inter Operative Radiation Therapy. She said IORT takes place on the table, while under anesthesia, and lasts just eight minutes. It's an alternative to whole breast radiation, if I qualify for this treatment. She then told me that the device with which they administer the IORT looks like a fish hook.

The emotions welled up inside of me. The truth and the perfectly clear journey to how I ended up in front of this doctor -- my last minute second opinion -- resonated deep in my core. I knew immediately this was my course of treatment and decided I would "qualify" for this treatment. I felt energy running through my body and the direct knowing that this was the right path for me. My husband and I left her office in astonishment over the genuine care, compassion, and incredible medical service we just witnessed. I cried in gratitude that I had followed my intuition and I knew I was in the right hands. My husband looked at me and said, "that other appointment borders on the criminal." I looked at him with tears streaming down my face and retorted "15 minutes?" At the time we really thought that was okay.

If it were not for my talk, I would have already had the surgery by now, and these events would have never unfolded. We went to lunch and I knew deep inside that everything was going to be fine.

From that point forward, navigating my breast cancer became the most important thing in my life. I have a type-A, driver personality and have spent much of my life pushing myself everywhere I wanted to go. With my breast cancer, I had to stop and be with myself in a way that was new to me. I had never before felt this level of true compassion and genuine nurturing toward myself. I attribute much of this to my education at The University of Santa Monica which I was attending at the same time -- but that's a story for another post.

While this new illness in my life wasn't a secret, it also wasn't something I was talking about in the way the "old me" would have been: seeking sympathy over the trauma of what was occurring. Because of the gentle compassion with which I treated myself, my road to being cancer free unfolded with ease and grace.

After my talk and before my surgery, I came into resonance with my truth. I knew the cause and the cure. All of the recent changes I had made -- quitting my job, starting my own consultancy, meditating daily, walking, juicing daily, pursuing my personal Spiritual Path -- it was an intuitive step ahead of this cancer. The cancer was the last concentrated residual to free itself from my body. The cancer was left over garbage which needed to be removed. The cancer was the acknowledgement of what had its hook in me and my ability to transcend it. 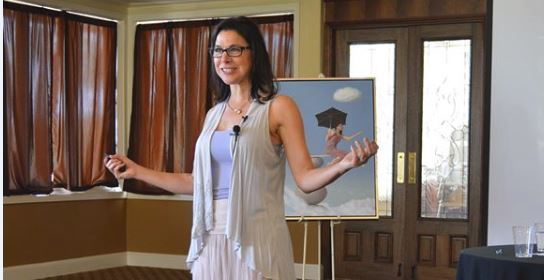 Three years earlier I developed a frozen shoulder. This physical issue interrupted my life in every way possible and I was pissed off about it. It was annoying, it was costing me time and money and it was forcing me to slow down. It was the relentless pain in my shoulder that prompted my meditation practice as a way to manage the pain. It was my shoulder that forced me out of work on a medical leave of absence only for me to recognize that my body, mind and Spirit were exhausted with the way I was living my life. It was the realization that I needed to make some serious changes in my life. And while the cancer was very attention getting, it was the shoulder pain that was the first impetus for all the changes I had begun.

Had I not made those changes, I would still be on the hook. The way I thought I was supposed to live life, had its hooks in me. Deep! My hook was working 50 hours a week while ignoring the exhaustion. Ignoring the pleading voice inside that I tried to silence for so many years. I had to use any free time on repair and basic maintenance of my body. The chiropractor, energy healer, massage therapist, not to mention the beauty schedule -- hair, nails, eyebrows. This was my weekend agenda so I could wake up on Monday and do it all again. Work, work, work -- bouts of insomnia, up at 2 a.m. thinking about work, showering while thinking about work, skipping breakfast to get to work sooner. Splinter my energies into a million places before I ever even got to work. Eat a shitty lunch, get home late. Allow stress and anxiety to consume my whole being. Ignore my Spirit. Repeat. Week after month after year, for twenty eight consecutive years.

Had I not stopped that pattern, the cancer would still be there.

But that's not what happened.

Today I am alive and cancer free. I did qualify for IORT and skipped seven weeks of radiation. Today I am in charge of my life. I am connected and I am guided. I am experiencing the most divine unfolding of beauty and perfection in my life -- and it all blossomed through slowing down.

It has flowered with listening to that little voice that had been trying to get my attention for so long. It has opened my heart to Spirit, to the universe and to everything and everyone around me. It has come with being vulnerable and being grateful for all of my experiences. It has come from shifting my perspective in knowing that all of our experiences, no matter how traumatizing, difficult or ugly they may appear, are invited and orchestrated with divine perfection for our own growth and learning in this life. I have also come to know that I am not smarter than the universe. The way things unfold, are happening for our highest good. I just had to learn to give up control to fully realize that.

I had to transcend my hook.