The prophet Isaiah once promised that the Lord would make deserts bloom like Eden, but a bunch of Norwegians may actually get the job done first.

The ambitious Sahara Forest Project is developing cutting-edge food, water and energy technologies in the deserts of Qatar and Jordan in an attempt turn sand dunes into farms. The plan: to combine solar thermal technologies with saltwater evaporation techniques, freshwater condensation, and efficient production of food and biomass without displacing existing agriculture or natural vegetation. As desertification becomes an increasingly vexing problem around the world, this group of technologists is aiming for revegetation. 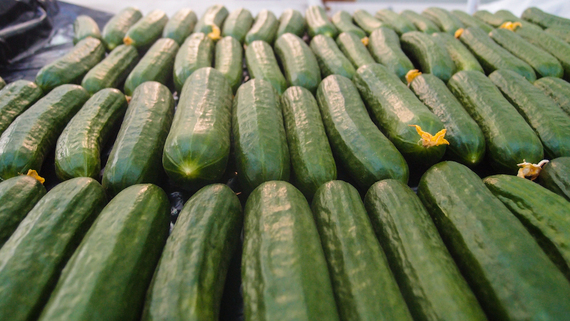 In 2011, the Sahara Forest Project signed agreements with influential chemical companies and agribusinesses in Qatar to kick off a pilot program there in 2012. While that project continues, SPF has also been working on plans for its "Launch Station" in Aqaba, Jordan, a 49-acre test run located seven miles from the sea to demonstrate the economic viability of the concept using all its core components. In June 2014, the SPF signed an agreement with The Royal Norwegian Embassy in Amman, with $1.9 million of funding for the Launch Station provided by the Norwegian Ministry of Climate and Environment, The Grieg Foundation, and other philanthropic sources.

What, exactly, is SPF building on the desert sands? The facility is designed around a saltwater-cooled concentrated solar power plant, as well as photovoltaic solar panels. The heat from the solar plant's mirrors powers an evaporative desalination system for the production of distilled water that is used to irrigate plants both in nearby greenhouses and in nearby outdoor plantings. Waste heat warms the greenhouses in the winter and regenerates the desiccant used for dehumidifying the air. 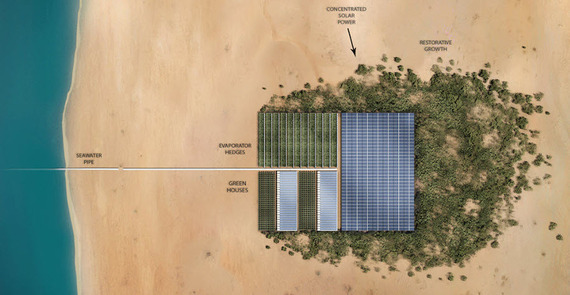 The greenhouses provide suitable growing conditions for year-round cultivation of high-value crops such as cucumbers, tomatoes, peppers, and eggplants at yields competitive with commercial European operations. Leftover seawater at about 15 percent salinity is further evaporated in hedges that create sheltered humid environments to grow fodder, biomass for energy use, and a wide range of salt-loving desert plant species. Salt becomes another sellable by-product, and a site can even accommodate algae ponds for cultivation of the kinds of green goo that's being harvested and processed for biofuel production.

The Sahara Forest Project has run numbers on what a 10,000-acre project, perhaps located in North Africa, might look like. The solar power plant would yield enough power to supply the needs of the project while also exporting 324 gigawatt-hours per year. It would have 740 acres of greenhouses consuming 20,000 cubic meters of freshwater produced annually by the desalinization process, enough water to yield 190,000 tons of tomatoes and melons combined. 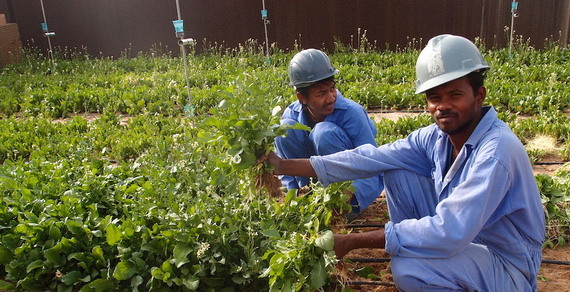 Surrounding the greenhouses would be almost 5,000 acres of outdoor vegetation and crops, much of which would be free-ranging revegetation of the desert land. Total yield: 30,000 tons of fodder. Finally, the farm would yield 7,500 tons of biofuel-ready algae oils. The closed-loop system, which would employ up to 20,000 people, would also manage to sequester carbon at a rate of up to 50,000 tons per year.

While the Sahara Forest Project may not achieve results like that for years--if ever--the test site is proving the concept today, and it's worth watching the project to see whether the technologies--and the economics--work out in the long run.

Interested in global development? Click here for more XPRIZE Grand Challenges and to vote on future prizes. You can also sign up for our exclusive newsletter or donate today!