I'm flying back from Nairobi. I had the privilege of making a presentation to a group of African sustainable business leaders. There was a passion in this small, but engaged meeting, a passion that makes one think of a positive future, rather than obsessing about AIDS, poverty, war and corruption, which are the overwhelming images we in the West associate with Africa. Bono and Bob Geldof, despite their inspiring good works, tend to perpetuate this impression that Africa is a basket case, an opinion that Melissa Davis expresses in her article, "Is Africa Misbranded?" and that economist William Easterly opines in the Los Angeles Times, "What Bono Doesn't Say About Africa". The people who attended this meeting hosted by The Environmental Press were thinking about a different basket, a breadbasket of opportunity that can sustainably and efficiently lift the lives of ordinary Africans.

There was no disagreement among attendees that Africa needs, even requires a sustainable future. The extraction industries have run wild here with no regulation that cannot be bought or bent to their will. The issue of Blood Diamonds was brought to the world's attention, but oil, mineral and timber extraction continues to fuel tribal conflicts that lead to the unraveling of communities and environmental destruction on a massive scale. The raw materials used to make your cell phone? They are fueling a ten-year war in East Africa. The piracy off the coast of Somalia? Its root cause is exploitation of Indian Ocean fisheries and toxic dumping. Clearly, the current system of resource extraction must shift to a more ecological and sustainable one.

Africa also needs better infrastructure, affordable sources of power and confident trading partners. Africa needs sustainable economic growth, but there is much disagreement on how sustainability should be achieved.

There are powerful forces at work in Africa driven by resource-hungry nations like China, the US and those of the EU. This is further encouraged by the World Bank that defines progress by the number of dams, highways and bridges it funds. Modern high-output agriculture with its dependence on water, fertilizer and GMO seed stock is also defined as progress, but never mind the downstream pollution and shrinking lakes. Improved sanitation and vaccines have contributed to increased health, but also increased population; and, all of this puts a heavy burden on Africa's ability to grow in a sound and sustainable way.

Progress also means profit. Large-scale progress produces vast amounts of cash that flows through the hands of multinationals and government officials with little trickle down to the average African. So, it's no surprise that one view of sustainability is driven by these forces. In these circles, sustainable solutions are discussed on a grand scale, like harnessing the vast wind and geothermal resources of East Africa or tapping the enormous water reserves in Congo. Large-scale carbon trading schemes are also part of the mix. These plans, some of which are needed, are huge and require huge, mostly foreign investment. The problem is that foreign investors and foreign aid programs often promise more than they deliver, leaving these projects chronically short of funds. When corners are cut, the environment suffers.

But there is another view. It is an opinion that the most progress can be made by direct assistance to the poorest and most populous Africans through micro-financing and clever inventions. It's simple things like the high-efficiency Berkeley Darfur Stove that reduces long journeys into the bush to collect firewood that in turn reduces deforestation, or the Q Drum that makes it easier to transport water in rural areas, or Professor Wangari Maathai's program to pay women and rural farmers to plant and maintain watershed trees.

One of these amazingly simple ideas enables sons and daughters who move to the city to transfer money to their parents who remain in rural communities. This is a homegrown Kenyan idea that is enormously successful and provides money to Africa's poorest citizens. 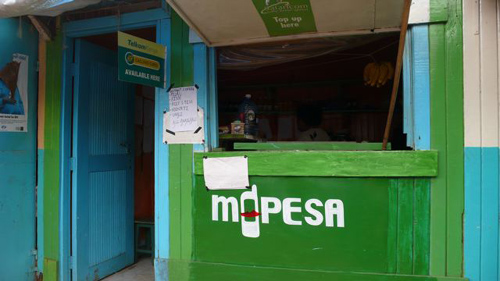 The idea is called M-PESA, a Safaricom system that uses mobile phones to transfer money instantly via SMS. No bank account is required. In Africa, they never had the luxury of a wired telephone system, so mobile wireless leaped ahead. Even poor country villages have wireless service and many rural people have cell-phones. A Kenyan cooked up the idea of M-PESA, and it makes a lot of things possible -- including a sustainable future for Africans. Poor people in rural areas can buy high-efficiency stoves with M-PESA or receive deposits for chickens and vegetables sold to city markets. They can also receive money from children who leave the village to find employment in the city. Funds deposited to phones can be turned into cash at village shops.

Building on this and similar platforms is the ingenious idea of a San Diego businessman, David Palella, to provide direct payment to rural people who offset their carbon production with high-efficiency stoves.

"The cell-phone-based Carbon Micro Credit system employs SMS (simple message service) and unique identifiers to allow millions of families in the Developing World to claim on a bi-weekly or monthly basis the carbon offsets they produce by using more efficient cooking methods such as a modern charcoal stove or solar cooker, instead of an inefficient open-pit fire burning biomass. As a result, each family is able to monetize directly its own contribution to mitigating global warming, while also reducing nationwide rates of deforestation and desertification."

The concept is promoted by David's non-profit, Carbon Manna.

In addition to Carbon Manna, there are a number of other organizations working toward a model of African sustainability including the Partnership For African Environmental Sustainability, Conserve Africa, Fair Trade In Tourism South Africa, All Africa, and the Kenya Organic Agricultural Network. The Green Living Project is currently documenting sustainable projects throughout Africa. For those who have read my book, you will see the beginning of an African gort cloud in this list.

Many nation-branding experts have been pondering how to change the West's negative impression of the African brand. I think the solution is sustainability.