This essay originally appeared on xoJane.com, Jane Pratt's new website where you can admit to anything -- no judgement.

When I was a kid I had a series of dreams that involved Immature. You know, that baby boy band starring Roger from Sister, Sister?

Anyway, my dreams usually involved group member LDB (Little Drummer Boy) singing "Never Lie" to me in the tree that stood in front of my window.

Since then, I've sat across from many men on dates and wondered what their fantasies were. By then mine always involved them really liking me and me playing the distant, mysterious girl they couldn't quite figure out.

Really, it was more about me not getting too close. Because if I got too close, you see, I'd have to tell him my "T."

Oh, I keep forgetting you may not be the T, so you may not know my T or what T is at all.

My T is basically my story, my story being that I'm a young woman who happens to be transgender. Still not getting it?

I was born a girl but in a boy's body, as media headlines tend to scream when telling stories like mine.

Regardless, I was born me, and in order to be me, I had to take many steps to affirm my me to myself, my family, and the world around me, and then, once I dealt with my gender change as a teenager, to the men I dated.

And this is where it gets tricky, and for some trans women, even dangerous.

Though many guys I've dated do not and may never know the gender history of the girl they randomly made out with on St. Marks (this is a whole 'nother post!), I have relayed my story to a select few. But there is only one man whom I wanted to tell my story to from the very first night we met.

It was early Easter morning 2009, and I was tipsy from shots that a pair of British soccer players kept bringing me and my girlfriend. We were at some bar on the Lower East Side, and I was twirling on the dance floor.

"This is my song," I remember saying frequently. It was that kind of night.

In the midst of my tipsiness, I felt someone looking at me. You know that feeling when you sense there's a singular focus just on you? That's what it was. 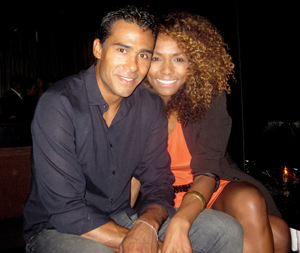 As I turned around, I saw the guy, this handsome, handsome man with skin the color of caramel popcorn and almond-shaped eyes. His beauty, to me, was right out of my mind's own sketch pad.

He was a fantasy come true, and I wanted him to want me.

"Hey," he said as I pushed curls out of my face, serving him my very best angle. "I really want to talk to you, but I gotta pee. Will you wait for me?"

I nodded, rushing back over to my girlfriend and the two soccer studs. Quickly powdering my T-zone and applying a coat of lip gloss, I was ready to do my whole mysterious, hot girl routine.

But when he came back over, he threw me: "Take a walk with me."

It's the kind of exchange only two people who are willing to fully be seen can share. It was natural and life-shifting.

I could feel the mystery I had so tirelessly built around me fall, until I was just me.

He kissed me on the cheek and put me in a cab, where I received his very first text: "You're a complete pleasure. -Aaron."

In the next month, Aaron and I went on a series of casual dates (the New Museum, a Tribeca Film Festival screening, the opening night of J.J. Abrams' Star Trek), before I found myself on his bed, naked -- figuratively, that is.

"I have something to tell you," I remember saying.

Aaron stood at the foot of his bed, readying himself for disappointment, it seemed to me. Or at least that's what I internalized.

How do I say this? I asked myself.

I didn't look at his face while spouting off the details of my journey through genders as a kid: "I knew I was a girl from my very first thoughts... I began presenting as female from age 12... I took hormones in high school... I flew to Thailand to have surgery at 18."

When I finally stopped talking, I exhaled. I'd finally told my whole story to someone I was falling for. And I was afraid that my biggest fear would come true: Aaron would look at me differently.

And it did come true.

I could no longer just be Aaron's fantasy, a mixed girl with curly hair from Hawaii with a master's degree and a job that "a million girls would kill for." Our fantasies had ended, and now we were just two people bare in front of one another.

And it was then that I went into the ugly cry. For the first time in my young life, I was being seen, fully seen, as the totality of my experiences. 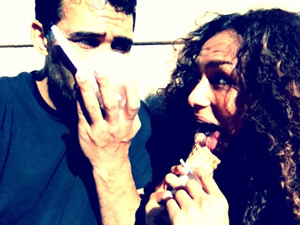 Fast-forward a few years, and Aaron is now my guy, the man I order dinner with every night, the one who grudgingly sits beside me as I watch every Real Housewives franchise (except for Orange County), the one who questions my newfound love of neon-pink OCC lip tars.

Most importantly, he's the one who doesn't want me to be a mystery -- not to him, at least. He wants to know me, to ask me questions about my past, force me to retrace steps that have made me the woman I am today. He's also the one who pushed me to begin fulfilling my dream of writing stories that matter: my own, my forthcoming memoir.

We're real together, and Aaron and the friendship and love affair that we've built is my foundation, a platform that has fortified my own sense of self and has, in the nearly three years since we met on that Lower East Side dance floor, given me the strength to step out of my shadow and come forward as a trans woman, lending my story as one of many narratives on what it means to be a young woman who happened to be born a boy.

Aaron is better than my tweenage fantasies, better than the dreams I had of some boybander singing to me in a tree, better than anything I could've written for my protagonists.

He's better because he's real, because he exists, because he wants more than just the idea of me. He wants me.