I remember the day I decided to finally step out and be my authentic self in public, over two decades ago in New York City. It was approaching fall. I was looking for ladies like me, and I found them on 14th Street in the Meatpacking District, trying to survive. I could not believe that they lived like this from day to day, for it was there that I also first encountered extreme hate directed at me simply for being my authentic self. I had been a professional for years, with almost two degrees, and I had never experienced such hostility and violence in my life. I was like a young child who needed protection and guidance on the basics so that I could survive myself, and these ladies on 14th Street embraced me and guided me on how not to get hurt, beaten up and attacked by strangers who sought us out to do us harm. I never understood why people would seek us out to do us bodily harm without any provocation.

I remember so many young ladies being attacked and beaten up during those years, and in 2014 the number of attacks, violence and murders suffered in the transgender community is still the highest of any community. It has been almost 25 years, and my community is still being attacked and murdered in high numbers, with no clear resolution in sight. My heart belongs to the ladies on 14th Street who stood with me night after night, trying to survive and just be their authentic selves. I cry today for those ladies who are no longer here with us in 2014, but my heart remembers them. I still speak to one friend from those days. By the grace of God, she is still here, like me, to stand here and talk about our victory.

Dr. Marc Weiss, a former professor at Columbia University and an advocate for equality, wrote in the foreword to my memoir I Rise:

During my six decades of life, I have been an activist and advocate for economic, social, environmental, cultural, and political justice. Over the past half-century, I have been involved with and supportive of civil rights and equal opportunity movements for African-Americans, Latino-Americans, Asian-Americans, Native-Americans, women, senior citizens, young people, working families, low-income households, military veterans, gays and lesbians, people with disabilities, unemployed workers, welfare recipients, public housing residents, agricultural laborers, homeless people, and many other groups, both in the USA and, more recently, throughout the entire world.

The main thing I have learned from these profound lifelong experiences is that people are people. Everyone, everywhere, is basically the same. We all care about one vital concern: our own livelihood and well-being, and the livelihood and well-being of our loved ones. Transgender people, in spite of their relatively atypical appearances and lifestyles, are precisely the same as every other human being throughout the world, in terms of their fundamental humanity and dignity.

I think the transgender story is an interesting story of courage and faith. It is about a hidden society within American culture. Most people do not interact with transgender people daily or regularly in their lives. I want to put a face on a group that is hardly recognized. Statistics say about 0.3 percent of adult Americans are transgender. That's only about 700,000 people. And transgender people of color are an even smaller community, but we have value and worth, just like everybody else. We need love and respect and dignity, just like every other American.

I want everyone to respect transgender people as people. My story is one of just trying to become whole and become who I really am. I am a sane, logical, thinking individual who has had to match the outside of my body with the feelings inside my body. I am not crazy, nor do I have any mental issues that clouded my mind during my transition. Individuals seek love and acceptance for who they are. That is basically what we are looking for too. Respect me, and I shall respect you. I ask you not to judge me without giving me a chance. I respect all religious beliefs, but my God is one of love and acceptance. 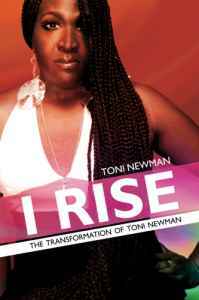 Author of Memoir I Rise-The Transformation of Toni Newman